World oil supply tightens in last 2 months: EIA
Global spare oil inventories tightened over the last two months, a U.S. government report said on Friday, which could lend the Obama administration some support if it decides to tap emergency oil reserves as the West applies sanctions on Iran 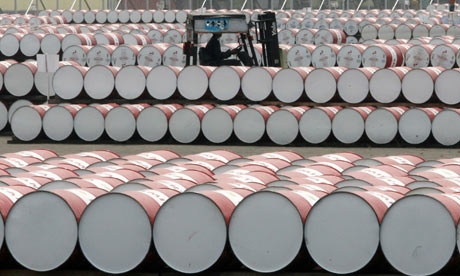 World crude inventories in countries other than Iran fell about 1.2 million barrels per day in July and August, due mostly to a seasonal peak in demand, said the report by the Energy Information Administration.

The report, required by the Iran sanctions law President Barack Obama signed last year, is published every two months by the Energy Information Administration. A copy of it was obtained by Reuters ahead of its publication.

The draw was smaller than a 1.6 million-bpd dip seen last year in the same time period. But any drop in supplies due to demand, in addition to a sharp decline in Iranian oil sales because of the sanctions, could give the Obama administration support to tap emergency oil reserves.

The West has applied tougher sanctions on Iran because it believes the country is trying to develop nuclear weapons. Iran says its nuclear program is for civilian purposes.

Stubbornly high oil prices of around $113 a barrel in the Brent futures market have left the administration wondering whether it should take action to give consumers relief. The White House has dusted off old plans for a potential release of emergency oil reserves as tension over Iran helps keep crude prices high.

But the head of the International Energy Agency, which is charged with coordinating use of consumer nation's strategic reserves, said last week there is no reason for a release right now as markets are "sufficiently supplied.

The EIA said on Friday global spare production capacity was "relatively tight by historical standards" at 2.4 million bpd, steady with the last report.

Global inventories fell even as Saudi Arabia produced oil in July and August at a rate that was 900,000 bpd higher than its average rate over the last three years, the EIA said. The OPEC powerhouse is producing at higher rates as output in its rival Iran gets hit by sanctions on both sides of the Atlantic.

Obama has even more flexibility for enforcing sanctions after he signed a new law on August 10 allowing consuming countries to avoid the penalties through a combination of forcing down prices of their Iranian crude purchases and cutting their volumes of the purchases, a Capitol Hill aide said.

Venezuela is importing oil despite having world's largest reserve
Venezuela, a country that boasts of having the largest oil reserves in the world, is facing an acute scarcity of gasoline due to deterioration of its refinery system, and the huge volume of fuel being smuggled out of the country.

Experts said that Venezuela has shifted from exporter to importer of gasoline under the Hugo Chávez administration, which is forced to import fuel and components to process it from the United States, not only for internal consumption but to allow the state enterprise Petróleos de Venezuela, S.A. (PDVSA) to fulfill contractual commitments.

The experts fear that the government will choose to ration the fuel because of its inability to contain the contraband and increase production.

In a way, they have already started to do just that, said Juan Fernández, former PDVSA’s executive planning director, referring to a government measure forcing motorists in border states to place a chip in their vehicles to count the amount of gasoline they put in their tanks.

The measure, which generated protests in the state of Zulia, also limits the amount of fuel residents can buy to only 41 liters (10.8 gallons) every two days, to control the massive contraband of gasoline to Colombia.

And even though the measure does not seem to be drastic at this point, Fernández said that it could be only the beginning.

“As in every economy where everything ends up deteriorating, the way they fix it is by imposing quotas and controlling the people,” Fernández said in a telephone interview. “That is what we are seeing with this alleged chip, which is nothing but a way to introduce a rationing quota system using contraband as an excuse.

“This is a wrinkle the government will start running, first in order states, then a little further out to reach other states close to the border and, since there is a deficit in the system, we will end up seeing the wrinkle growing until everybody is under controlled consumption,” he said.

The deficit in the system is caused by a combination of factors ranging from an abrupt plunge in production, an increase in the number of vehicles and the flight of thousands of barrels of the extremely cheap Venezuelan gasoline to Colombia, Brazil and Guyana.

“It’s a perfect combination,” said Horacio Medina, former manager of PDVSA. “As long as these factors are in play, it will be very difficult to solve this problem.”

The fact that Venezuela is lacking refinery capacity is a paradox for a country that boasts of having the largest reserves of crude oil on the planet, estimated at 316,000 millions of barrels, and that only 10 years ago exported gasoline to other countries, including the United States.

According to the Department of Energy, Venezuela imported 1 million barrels of processed gasoline only in December 2011, which, added to the its purchases from the United States of crude oil and oil derivatives reached a total of 2.21 million of barrels.

Experts said that the refinery capacity in Venezuela has been dismantled in the last 10 years, first by a Chávez administration decision to sell the PDVSA refineries abroad, and later due to a chain of accidents and maintenance problems in the country’s main refineries.

Meanwhile, Venezuela has not built a refinery since Chávez took power, despite promising to build dozens of them inside the country and abroad. On Tuesday, he again promised two new facilities.

Only one of those promises seems to be materializing for now — the one that forced the Castro brothers to build a refinery in Matanzas, Cuba.

On the other hand, the national fuel supply is being affected as well by the massive contraband, which has turned into a gigantic source of corruption.

These types of operations are very lucrative because of the enormous subsidies the government grants to the consumption of gasoline produced in Venezuela, where one gallon of gasoline can be purchased for $0.12.

“If in Venezuela the price is two cents a liter and in Cúcuta, Colombia, on the other side of the border, is $1.30, you have a difference in price of 60 times that should be able to cover everything,” Fernández said.

Yet, the volumes involved demonstrate that the flight is not carried out mainly through individuals who fill up the tank and then cross the border to sell it in the neighbor country.

Medina said that there are tank trucks and river barges transporting thousands of gallons of gasoline every day across the border to sell them in Colombia, a type of operation that undoubtedly could not be carried out without some degree of complicity by the authorities in charge of watching the border.

“We’re talking billions of dollars lost this way,” he said. “It’s too much money, and it’s money not being transported by taxi drivers in the gas tanks of their vehicles.”

Posted by seemorerocks at 12:20