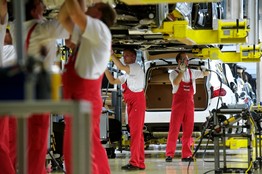 The survey showed German business confidence fell to a 2½-year two-and-a-half-year low in August, to 102.3 points from 103.2 points in July, the lowest reading since March 2010. Analysts had expected the August figure to come in at 102.7 points. Meanwhile, July's figure of 103.2 points was lowered slightly from the initial estimate.

While the pace of decline slowed from the previous survey, its findings reflect that Germany isn't immune to the general slowdown in Europe and outside Europe, said BNP Paribas economist Dominique Barbet.

"This could help [German Chancellor Angela] Merkel and [European Central Bank President Mario] Draghi convince the German people that more efforts to support the euro zone are necessary and are in the interest of Germany," Mr. Barbet said.

Mr. Draghi has proposed that the ECB be allowed to buy distressed euro-zone governments' debt if they agree to meet strict economic conditions. Ms. Merkel has expressed support for the ECB's proposal, which is expected to lower the borrowing costs of Spain and Italy.

The Ifo data indicates that Germany's economic output will be weak in the third quarter but the country isn't facing the threat of a recession, Ifo economist Klaus Wohlrabe said. Nonetheless, Ifo institute President Hans-Werner Sinn said Germany's economy was continuing to falter.

The Ifo survey of about 7,000 German companies engaged in industry and trade showed that the subindex assessing current conditions fell slightly to 111.2 from July's 111.5, which was lowered from the initial estimate. The subindex for business expectations fell to 94.2 from a slightly revised 95.5 in July. 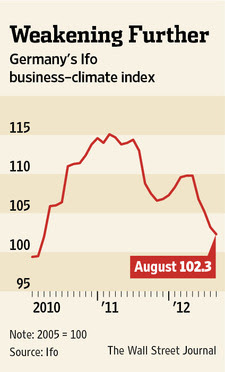 "The still-solid current assessment component of today's Ifo report illustrates the relative strength of the economy. However, the headline figure and, above all, downbeat expectations clearly add to concerns that strong growth in the first half of the year was just [temporary]," said Carsten Brzeski, senior economist at ING Bank.

The growth outlook for Germany also darkened after second-quarter gross domestic product data, also published last week, showed the economy expanded at 0.3% from the previous quarter and 1% in annual terms.


Although the data confirmed economic output had continued to expand, it showed growth was slowing as production-related investment fell for the fourth consecutive quarter. Slowing global demand is expected to take its toll on German exports in the second half of this year.

Confirmation of that came from manufacturers polled by the Ifo Institute. For the first time in almost three years, their export expectations turned slightly negative as their business expectations in general worsened. Their views of the current business situation recovered slightly after July's deep fall.

Retailers' assessment of their current business situation also deteriorated significantly. Wholesalers' views on their prospects worsened for the sixth consecutive month, Ifo said. That came despite widespread views among economists that domestic consumption will become the saving grace for Germany's economy.

Construction companies reported a small improvement in their current business conditions while their outlook for the next six month continued to worsen, the institute said.

"It looks as if the German economy will, at best, be treading water in the coming months," ING's Mr. Brzeski said.