This is probably the greatest example of injustice meted out to a whole population in the world. This report is from the pro-zionist BBC

Gaza 'will not be liveable by 2020' - UN report
The Gaza Strip will not be "a liveable place" by 2020 unless action is taken to improve basic services in the territory, according to a UN report. 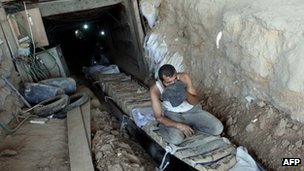 Basic infrastructure in water, health, education and sanitation "is struggling to keep pace with a growing population", according to the report.

Israel tightened a blockade on Gaza after the Islamist movement Hamas came to power in the territory in 2007.

Israel says the blockade, which is policed with Egyptian co-operation and has never been fully lifted, is necessary to prevent weapons reaching Hamas.

The UN report estimates Gaza will need double the number of schools and 800 more hospital beds by 2020, and says the territory is already suffering from a housing shortage.

The report also says the coastal aquifer, the territory's only natural source of fresh water, may become unusable by 2016.

UN officials point to the difficulty of improving the situation given "the closure of the Gaza Strip, violent conflict, and the pressing need for Palestinian reconciliation".

Gaza has no air or sea ports, and the economy is heavily dependent on outside funding and smuggling through tunnels under the Egyptian border.

Even though Gaza has experienced some economic growth in recent years, the report says it "does not seem to be sustainable" and finds that Gazans are worse off now than in the 1990s.

Unemployment was at 29% in 2011 and has risen since then, particularly affecting women and young people.

Traffic through the cross-border tunnels was hit in recent weeks by violence between Egyptian security forces and militants in Egypt's Sinai peninsula, which borders Israel and Gaza.

The witnesses and sources said Israeli F16 warplanes fired at least seven bombs at two sites belonging to militants in northern and southern Gaza Strip, adding that several powerful explosions were heard all over the area.

Ambulances and rescue teams rushed to the targeted area, but no injuries were reported so far.

Posted by seemorerocks at 15:47