Up to now there has been no coverage, and little acknowledgement of the NAM summit in Tehran – until now when there is difference.

First, the westerrn version of events and then, below, an interview which gives more context to President Morsi's speech. 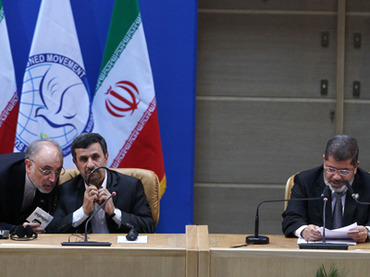 Egypt's president Mohamed Morsi has said that the "oppressive" Syrian regime had lost all legitimacy, in a blistering speech in Tehran that provoked the Syrian delegation to storm out and amounted to a stunning rebuke to his Iranian hosts.

During the first visit by an Egyptian leader to Tehran since the 1979 Islamic revolution, Morsi said the world had an "ethical duty" to support Syria's rebels.

"Our solidarity with the struggle of the Syrian people against an oppressive regime that has lost legitimacy is ... a political and strategic necessity," he said.

"We all have to announce our full solidarity with the struggle of those seeking freedom and justice in Syria. [We should] translate this sympathy into a clear political vision that supports a peaceful transition to a democratic system of rule that reflects the demands of the Syrian people for freedom."

Morsi's comments to a meeting of the 120-nation Non-Aligned Movement in Tehran amounted to a verbal handgrenade tossed at Iran's shocked leadership. Iran is the key regional sponsor of Syria's embattled president, Bashar al-Assad, and one of his few remaining international allies.

The remarks are also a bold assertion of post-revolutionary Egypt's renewed regional leadership ambitions. With the Middle East now dividing sharply along sectarian lines, Morsi has thrown his weight behind a powerful group of Sunni states including Saudi Arabia, Qatar and Turkey that support Syria's rebels – with only Shia Iran, evermore isolated, backing Assad and his Shia Alawite-led regime.

Morsi, a moderate Islamist, has proposed that Iran take part in a four-nation contact group including Egypt, Turkey and Saudi Arabia that would mediate in the Syrian crisis. Morsi declared: "The bloodshed in Syria is the responsibility of all of us and will not stop until there is real intervention to stop it. The Syrian crisis is bleeding our hearts."

Morsi was apparently referring to diplomacy rather than any potential foreign invasion. He also hailed both Syrians and Palestinians for their "brave" struggle against oppression. He later met Iran's President Mahmoud Ahmadinejad.

Analysts said the week-long summit had not been the smooth diplomatic triumph Iran might have hoped for.

"The Iranians rolled out the red carpet for Morsi. But he didn't follow the Iranian script. It was embarrassing for the Iranians," said David Hartwell, senior Middle East analyst at IHS Jane's, adding: "The non-aligned movement tries to be fairly anodyne and focused on anti-imperialism. But Syria has made it problematic. Egypt also views Iranian influence in Syria, Lebanon and the Palestinian territories as particularly unhelpful. It sees it as an Iranian/Shia attempt to spread influence in the region."

Of Morsi, he said: "We are learning about him. We don't know what his foreign policy is going to be."

Morsi is the first Egyptian leader to visit the Iranian capital since the 1979 Islamic revolution. Egypt and Iran fell out over Cairo's support for the Shah and its peace deal with Israel. Despite recent improvements, neither has upgraded ties to ambassadorial level.

Iran, meanwhile, faces diplomatic isolation and sanctions because of its alleged nuclear programme....


Egypt still depends on billions of dollars of US aid, so it was predictable that Morsi would turn up at the Non-Aligned Movement (NAM) summit and denounce Syria, Clark said.

Morsi’s controversial remarks prompted members of the Syrian delegation to walk out on the speech in protest.

Clark spoke with RT about the consequences of Morsi’s statement.

RT: Syria’s foreign minister has said that Morsi’s comments amount to inciting further violence in the country. What do you think?

Neil Clark: The problem I have with the speech is that it was so imbalanced. He didn’t criticize the rebels at all. The rebels have been responsible for much of the violence in Syria. The government too – that’s fair enough. But there were bombs going off this week at funerals, with 12 people killed, and he didn’t make any mention of that. So I can understand the Syrians feeling very aggrieved by what he said.

RT: Morsi would have foreseen that his statement, however accurate or inaccurate, would have angered Syrians and the hosts of the summit. What do you think his motivation was here?

NC: We’ve got to bear in mind the fact that Egypt receives about $1.56 billion US in aid. On top of that, back in August, they received $2 billion from Qatar. And of course, the US and Qatar are two of the leading hawks on Syria. So when you’re receiving that much money from the US and Qatar, it’s hardly surprising for Egypt to turn up at the summit and criticize Syria.

RT: The new Egyptian leader Mohammed Morsi is perhaps already signaling his friendship with the West, or possibly with Capitol Hill. Do you think the 120 member-states attending the summit can come up with a way to resolve the ongoing crisis in Syria?

NC: The key player in this is the US. Unless we get a change of position from the US and its allies, I don’t see what the NAM movement can actually do. I think the ball is in America’s court, and all we’re getting from Washington is more right-wing rhetoric about arming rebels. So unless we get a major shift, it’s not going to help. And I’m afraid Egypt’s position isn’t helping at all.

RT: Mohammed Morsi appears to be on friendly terms with Iran, China, Israel and the US. There had been a talk of a possible geo-political shift in the Middle East. But do you think we can really take this new Egyptian leader at face value?

NC: I don’t think we can. I think people who are expecting a shift will be disappointed because of the financial hold that the US has over him. He’s trying to be all things to all people. He’s trying to be friendly with Israel and Iran. It doesn’t work. You have to make a choice and make a stand. If he wants to support the Palestinian people, then he can’t be friends with the current Israeli regime.

RT: Do you think Morsi was trying to undermine the summit with his comment? Even Ban Ki-moon, who attended the summit against the US and Israel’s wishes, hasn’t said anything as harsh as what Morsi said.

NC: Absolutely. I think it’s all part of the plan to go there and sabotage the summit. A lot of people were very naïve about Egypt. They thought there was going to be a meaningful change in Egypt’s foreign policy after what happened last year, but it’s continuing. It’s more of the same. I think that’s part of the game. The US will be very pleased with what Morsi said.

RT: Some possible plans have been put on the table to resolve the crisis in Syria – both Egypt and Iran have put forward plans to form mediator groups. Morsi suggests involving Egypt, Iran, Turkey and Saudi Arabia. Ahmadinejiad suggests Egypt, Iran and Venezuela. Which one do you fancy the most?

NC: Well, if you look at the first choice, you’ve got three countries – Saudi Arabia, Egypt, and Turkey – who actually want regime change in Syria, so they don’t want a peaceful, compromise solution. So I don’t think anything involving Saudi Arabia or Turkey is in the cards. The second option is better, but it doesn’t matter what mediator groups we set up. The key player in all this is the US. The US has to change its policies and allow Syrians to sort out their own futures and back out of Syria. Then we can get some peace and dialogue.

RT: Washington has said the Non-Aligned Movement Summit isn’t worthy of any high-level attendance. Do you think such criticism is justified?

NC: It’s two-thirds of the world and the US has the arrogance to say it doesn’t count. The US wants us to believe that only it and its allies represent the international community. The international community is meeting now in Tehran and the US doesn’t like it. The fact is that the US is getting more isolated on a series of issues. South America, African countries, China, Russia: That is the world and I think we’re going to see more of a shift in years to come. And the US power is in decline – that’s the reality. And that’s what they don’t like.

Posted by seemorerocks at 09:51