China-Japan tensions rising over disputed islands
Nationalist tensions are rising in China over rival claims with Japan about the ownership of several uninhabitable rocky islands -- despite efforts by officials in both Beijing and Tokyo to defuse the dispute. 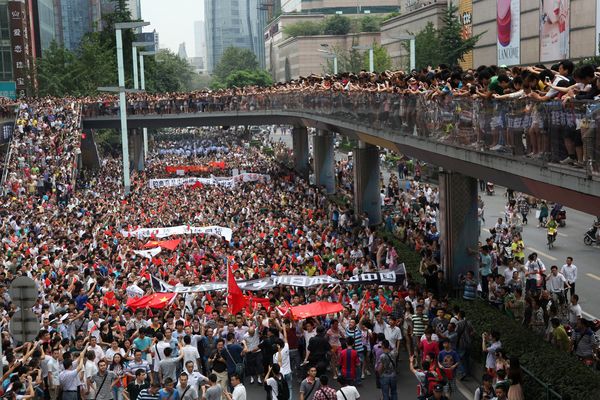 Nationalist tensions are rising in China over rival claims with Japan about the ownership of several uninhabitable rocky islands -- despite efforts by officials in both Beijing and Tokyo to defuse the dispute.

On Monday, the Chinese Foreign Ministry expressed regret over an attack a day earlier on the official car carrying Japan's ambassador to China, Uichiro Niwa. Neither Niwa nor another Japanese diplomat in the vehicle was injured, but protesters forced the car to a stop on a busy Beijing road and ripped the Japanese flag from the vehicle.

Also on Sunday, protests were staged in about 25 other Chinese cities, with marchers burning flags depicting the rising sun, chanting anti-Japanese slogans and vandalizing Japanese cars, restaurants and other businesses, the Kyodo news agency reported.

The official New China News Agency reported that the Beijing government had made assurances to Tokyo that Japanese citizens and interests in China would be protected. The agency also noted that Japan's national government had blocked a controversial plan by the governor of Tokyo to visit and survey the islands that the municipality has proposed buying from their private owners to cement Japan's claim. The disputed outcroppings are called Senkaku in Japan and Diaoyu by the Chinese.

Long-simmering resentment of Japan's control over the islands boiled over on Aug. 15, the 67th anniversary of Japan's World War II surrender, when 14 Hong Kong activists staged a symbolic landing at one of the islets to assert China's claims of sovereignty. The activists were arrested by Japanese coast guard members and deported.

Since then, anti-Japanese demonstrations have flared across China, at times drawing thousands into defiant demands for the islands to be restored to China, which controlled them from the 14th century until 1895. Sunday's protests, organized over the Internet, attracted more than 5,000 in Shenzhen and about 3,000 in Hangzhou, as well as smaller gatherings outside the Japanese Embassy in Beijing and its consulate in Hong Kong, Kyodo said, citing a report from Japanese diplomatic missions in China.

In an editorial, the daily Yomiuri Shimbun accused Beijing of tacitly encouraging the anti-Japan protests, and urged Chinese authorities "to do everything they can to secure the safety of Japanese individuals and companies in the country."

The newspaper also implied that Beijing was playing "the anti-Japan card" as a tool in the power struggle leading up to this fall's national congress of the Communist Party, when a once-in-a-decade leadership change is due to be announced.