Australia - running out of luck

More on the Australian economy - from an investment point-of-view

Australia: Running Out of Luck Down Under
By Jonathan Tepper, Variant Perception 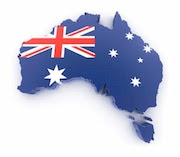 Australia has been described as the lucky country, but it is running out of luck and has a terrible combination of fundamental factors. In fact, Australia reminds us in many ways of the housing bubbles in the UK, Spain and Ireland. In each case, the country experienced a banking crisis.

Australian growth has been dependent on two huge bubbles: a domestic housing market that is one of the most overvalued in the world and a reliance on the Chinese fixed asset investment craze. Despite extraordinary commodity exports, Australia has run current account deficits and has a terrible international investment position. A substantially weaker currency in Australia is inevitable given fundamental factors. Oversized banks dependent on external financing, a bursting housing bubble and a slowing Chinese economy are all fundamental factors which are likely to weigh on the currency. As we explain, a weaker currency can either come in the form of the Reserve Bank of Australia (RBA) reducing interest rates or a balance of payment-like crisis in which foreigners pull funding from the banking sector. In both cases, the RBA would likely have to expand domestic liquidity substantially to prop up the banking system.

Please visit our website for the full version of the report.

> Australia is a classic case of the Dutch Disease. The Dutch Disease denotes the loss of competiveness in the tradable manufacturing and industrial sector as a result of a resource/commodity boom which leads to an overvalued real exchange rate. In Australia, the mining sector has crowded out almost all other sectors of the economy and also funnelled credit and liquidity into a housing bubble in the real estate sector.

> Australia net external debt levels resemble those seen in the European periphery; the currency is fundamentally vulnerable. Australia has been running a persistent current account deficit since 1980 and the country’s negative net international investment position is one of the largest in the world. On this background, the strong currency makes no sense and fundamentally the currency is very vulnerable to capital flight from the banking system.

> Two options to weaken the currency, lower rates or a balance of a payments crisis. The Australian currency will weaken in one or two ways. Either the RBA gradually reduces interest rates to accommodate a structurally slowing economy and a relative end to the mining boom or the economy will suffer from a balance of payment crisis as external financing dries up due to the decline in the terms of trade exposing the negative current account.

> Australia’s commodity sector is tied to a structurally slowing Chinese economy. The commodity sector remains a force to be reckoned with in Australia and will remain cyclically tied to China. Still, the Chinese economy is structurally slowing down and this will impact the growth rate of mining and resource related activities in China. Australia is likely sitting on significant overcapacity in the mining sector which will be difficult to transfer to other sectors.

> Our long-term technical buy signal on Australian equities is in effect, but avoid miners and banks. We currently have a long term technical buy signal in effect on Australian equities as a result of the recent sharp sell-off. This is usually followed by good returns over the next 6 months or so. Although the market cap on the ASX 200 strongly favours overweight in mining and financials (market weight), we would avoid these two sectors and buy into defensives (consumer staples and health care) as well as industrials.

> Industrials and manufacturing will outperform on lower interest rates and a weaker currency. The gradual end to Dutch Disease will eventually lead to outperformance of the industrial sector. In the long run, our view is that the Australian equity market cap will re-weight away from mining and financials towards industrials and eventually consumer and retail.