This is going to be awkward for the US media, because the perpertrators were white and Christian.

This is going to be a growing trend as the Empire unravels – with mass shootings just about every week and now a real terrorist plot, from within the US military.

US solders at Fort Stewart accused of murder in anti-government plot
Murders of former soldier and his girlfriend reveal militia's plan to stockpile weapons, poison food supply and assassinate Obama 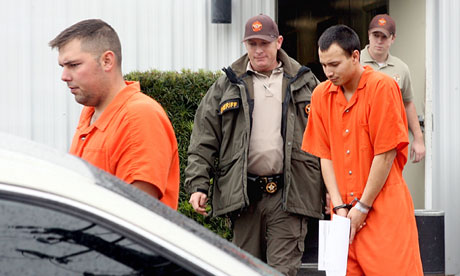 Four army soldiers killed a former comrade and his girlfriend to protect an anarchist militia group they formed that stockpiled assault weapons and plotted a range of anti-government attacks, prosecutors told a judge Monday.

Prosecutors in rural Long County, near the sprawling army post Fort Stewart, said the militia group composed of active duty and former US military members spent at least $87,000 buying guns and bomb components. They planned a series of attacks, aimed ultimately at overthrowing the government and assassinating the president.

"This domestic terrorist organization did not simply plan and talk," prosecutor Isabel Pauley told a superior court judge. "Prior to the murders in this case, the group took action. Evidence shows the group possessed the knowledge, means and motive to carry out their plans."

One of the Fort Stewart soldiers charged in the case, army private first class Michael Burnett, also gave testimony that backed up many of the assertions made by prosecutors. The 26-year-old soldier pleaded guilty Monday to manslaughter, illegal gang activity and other charges. He made a deal to cooperate with prosecutors in their case against the three other soldiers.

Prosecutors said the group called itself Fear, short for Forever Enduring Always Ready. Pauley said authorities do not know how many members the militia had.

Burnett, 26, said he knew the group's leaders from serving with them at Fort Stewart. He agreed to testify against fellow soldiers private Isaac Aguigui, identified by prosecutors as the militia's founder and leader, sergeant Anthony Peden and private Christopher Salmon.

All are charged by state authorities with malice murder, felony murder, criminal gang activity, aggravated assault and using a firearm with committing a felony. A hearing for the three soldiers was scheduled Thursday.

Prosecutors say Roark, 19, served with the four defendants in the fourth brigade combat team of the army's third infantry division and became involved with the militia. Pauley said the group believed it had been betrayed by Roark, who left the army two days before he was killed, and decided the ex-soldier and his girlfriend needed to be silenced.

Burnett testified that on the night of December 4, he and the three other soldiers lured Roark and York to some woods a short distance from the army post under the guise that they were going target shooting. He said Peden shot Roark's girlfriend in the head while she was trying to get out of her car. Salmon, he said, made Roark get on his knees and shot him twice in the head. Burnett said Aguigui ordered the killings. "A loose end is the way Isaac put it," Burnett said.

Also charged in the killings is Salmon's wife, Heather Salmon.

Pauley said Aguigui funded the militia using $500,000 in insurance and benefit payments from the death of his pregnant wife a year ago. Aguigui was not charged in his wife's death, but Pauley told the judge her death was "highly suspicious".

She said Aguigui used the money to buy $87,000 worth of semiautomatic assault rifles, other guns and bomb components that were recovered from the accused soldiers' homes and from a storage locker. He also used the insurance payments to buy land for his militia group in Washington state, Pauley said.

In a videotaped interview with military investigators, Pauley said, Aguigui called himself "the nicest cold-blooded murderer you will ever meet". He used the army to recruit militia members, who wore distinctive tattoos that resemble an anarchy symbol, she said. Prosecutors say they have no idea how many members belong to the group.

"All members of the group were on active duty or were former members of the military," Pauley said. "He targeted soldiers who were in trouble or disillusioned."

The prosecutor said the militia group had big plans. It plotted to take over Fort Stewart by seizing its ammunition control point and talked of bombing the Forsyth Park fountain in nearby Savannah, she said. In Washington state, she added, the group plotted to bomb a dam and poison the state's apple crop. Ultimately, prosecutors said, the militia's goal was to overthrow the government and assassinate the president.

The army brought charges against the four accused soldiers in connection with the slayings of Roark and York in March but has yet to act on them. Fort Stewart spokesman Kevin Larson said he could not comment immediately on the militia accusations that emerged in civilian court Monday.

District attorney Tom Durden said his office has been sharing information with federal authorities, but no charges have been filed in federal court. Jim Durham, an assistant US attorney for the southern district of Georgia, would not comment on whether a case is pending.