Another hurricane for New Orleans

Isaac revs up to hurricane force near New Orleans
Tropical Storm Isaac strengthened into a hurricane just off the U.S. Gulf Coast on Tuesday as it churned toward landfall in the New Orleans area seven years after the city was devastated by Hurricane Katrina. 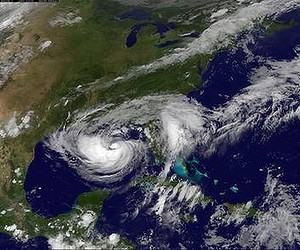 "Isaac has finally formed into a hurricane, so we are officially in the fight and the city of New Orleans is on the front lines," New Orleans Mayor Mitch Landrieu told reporters.

The U.S. Army Corps of Engineers began to close for the first time the massive new floodgate on the largest storm-surge barrier in the world, at Lake Borgne, east of New Orleans.

In other preparations, energy companies evacuated offshore oil rigs and shut down U.S. Gulf Coast refineries as the storm threatened to batter the oil refining belt.

At 11:20 a.m. EDT (1520 GMT), the Hurricane Center said Isaac was centered about 75 miles south-southeast of the mouth of the Mississippi River with top sustained winds of 75 miles per hour.

Its forward speed was a relatively slow 10 mph, a concern for people in the path of the storm since slow-moving cyclones can bring higher rainfall totals. The storm was about 370 miles wide.

Isaac spared Tampa, Florida, where the Republican National Convention began on Monday. But it forced party leaders to revamp their schedule and they may have to make further revisions so as not to be seen celebrating Mitt Romney getting the party's presidential nomination while Gulf Coast residents are struggling through the storm.

President Barack Obama added his concerns in a statement from the White House, saying: "We're dealing with a big storm and there could be significant flooding and other damage across a large area.

"Now is not the time to tempt fate," he added, saying people should heed warnings and evacuate if instructed by authorities to do so.

Rain and high winds were expected in the Gulf Coast region in the coming hours, bringing the threat of storm surge and flooding.

Isaac had New Orleans in its sights as the city still struggles to recover from Hurricane Katrina, which swept across it on August 29, 2005, killing more than 1,800 people and causing billions of dollars of damage.

After Katrina, the Corps of Engineers built a $14.5 billion defense flood system of walls, floodgates, levees and pumps designed to protect the city against a massive tidal surge like the one that swamped New Orleans in Katrina's wake.

The floodgate being closed is 26 feet high and 1.8 miles long. It was designed to prevent the Inner Harbor Navigation Canal from breaching its walls, as it did in 2005, flooding the neighborhoods of the Lower Ninth Ward, Gentilly and New Orleans East, and St. Bernard Parish.

Most of the Lower Ninth, which still shows the devastation of Katrina, was deserted and quiet about midday on Tuesday. Residents who hadn't evacuated were unloading water, food and fuel from their cars and trucks into their homes.

Authorities have urged thousands of residents in low-lying areas to leave, warning the storm could flood towns and cities in at least three U.S. Gulf Coast states with a storm surge of up to 12 feet.

Rainfall accumulations, potentially totaling as much as 20 inches in some areas, could also trigger widespread flooding.

Isaac was not forecast to strengthen beyond a Category 1 hurricane, the lowest on the five-step Saffir-Simpson scale. Its top projected winds were about 80 mph. While that would be well below the intensity of Katrina, which was a Category 3 storm, the size of Isaac's slow-moving system has forecasters predicting widespread flooding.

Sporadic rain had begun to fall in New Orleans with gusty breezes shaking trees by late Tuesday morning, in the first signs of the storm's approach.

"We're staying here for the duration," said Joe Locascio, 53, as he filled cans of gasoline for his generator at a local gas station. "It doesn't look too bad."

Locascio added that he and his family had evacuated for Katrina but this storm didn't look as severe.

Steve Frezer, a 45-year-old poker dealer was topping off gas cans in the rear of his truck.

"We're going to ride it out. We don't live in a flood zone and we have a generator, that's what the gas is for," said Frezer, who had also filled the rear of his truck with cases of bottled water. "We have a bunch of food, a grill, charcoal. We'll have a party tonight," he said.

But along Canal Street in the historic French Quarter, crews were boarding up the windows of stores and businesses.

"I'm not all that concerned about the storm. It's still a Category 1," said Charles Neeley, a 69-year-old contractor overseeing workers covering the windows of a CVS drugstore. "We usually ride out ones and twos and get the hell out for threes and fours."

Nonetheless, Neeley said he too had stocked up on food and water at home and fuel for his generator.

With nearly 80 percent of offshore U.S. Gulf of Mexico oil production shut in and nearly half of natural gas output offline, energy companies along the Gulf Coast refining center braced for the storm's impact, shuttering some plants and running others at reduced rates ahead of Isaac's landfall.

Intense hurricanes such as Katrina -- which took out 4.5 million barrels per day of refining capacity at one point -- have flooded refineries, keeping them closed for extended periods and reducing fuel supplies.

The U.S. Department of Energy estimates that about 1.32 million barrels-per-day of refining capacity had come offline in the Gulf Coast by Monday afternoon. Louisiana usually processes more than 3 million barrels per day of crude into refined products.

Although no damage to offshore installation had been reported, some energy experts said the sweeping disruption of oil production, refineries and key import terminals could make it more likely the U.S. government would release oil supplies from its nearly 696-million-barrel Strategic Petroleum Reserve in the coming weeks.

Prior to the storm, the White House had already considered a release, as tensions over Western sanctions on Iran pushed up oil prices. Despite Isaac's disruptions to production, international benchmark Brent crude traded down slightly to $112 a barrel on Tuesday.

Isaac killed at least 22 people and caused significant flooding and damage in Haiti and the Dominican Republic before skirting the southern tip of Florida on Sunday.

US President Barack Obama has warned of significant damage and flooding from Tropical Storm Isaac, telling people in its path to take the "big storm" seriously and follow directions.

"I want to encourage all residents of the Gulf Coast to listen to your local officials and follow their directions, including if they tell you to evacuate," Obama said in a televised statement at the White House.