Bettng against the world economy 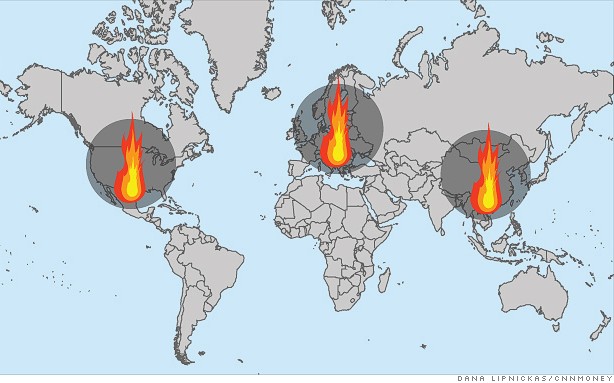 That so-called dry powder gives them the cash they need to quickly jump in if markets sell off, according to numerous hedge fund managers and industry consultants.

"Most hedge funds I see are carrying lower market exposure than I've seen in some time," said Brad Balter, founder of investment advisory firm Balter Capital Management. "This is not to say they are net short. They simply want to conserve their buying power and be ready for major opportunity sets that may arise."
Many are anticipating that Europe's debt crisis, the U.S. fiscal cliff, or the slowdown in China will cause a 2008-like reaction around the globe, when stocks swiftly sold off in the wake of the financial crisis.

But betting on a downturn in this environment is a risky play.

The latest Fed minutes showed central bankers leaning toward more stimulus. Should Fed chairman Ben Bernanke suggest another round of bond buying next week in Jackson Hole, Wyo., stocks could swiftly move higher. On top of that, Greece is still in limbo and talk of the European Central Bank intervening in the bond market makes predictions about an end-game for Europe nearly impossible.

"I have not seen the level of uncertainty this high for a long long time," said Komal Sri-Kumar, chief global strategist at TCW . "If you were a hedge fund and you didn't know when the correction would come but were concerned, it would makes sense to keep cash available."

"They could've picked stocks poorly, but with these returns, it looks more like they're not even close to being fully invested in the market," said Nadia Papagiannis, Morningstar's director of alternate fund research.

The SEC only requires hedge funds to disclose stocks they own, and not how much cash they're holding or what stocks they're betting against.

Holding onto cash is actually one of the boldest moves a hedge fund can make. Hedge fund managers get a 2% fee for all the money they manage, so investors quickly grow irritated with managers who sit and wait. "It's a natural reaction to say why am I paying you to hold cash," said Daniel Celeghin, partner at hedge fund consulting firm Casey, Quirk & Associates.

Some funds have outperformed the S&P. Among them: Tiger Global Management, which focused on technology stocks and counts Apple (AAPL) as its top holding, is up more than 20% as of July 31, according to a source with knowledge of the fund's returns. And the flagship hedge fund at Citadel run by billionaire Ken Griffin is up 11.5% through July 31, according to sources familiar with its returns.

Hedge funds betting on the mortgage market and those focused on financials have also scored big in 2012. Bay Pond Partners, owned by asset manager Wellington Partners, is up 11%, largely through its investments in bank stocks, said two sources. Two key funds at SPM, a $3.4 billion fund focused on residential mortgages, are up 13.4% and 11.3% respectively. Another mortgage focused hedge fund, Metacapital, is up 25% through July.

Despite the industry's overall recent poor performance, investors haven't shied away. In the first quarter of 2012, the hedge fund industry held a record $2.13 trillion of assets, according to Hedge Fund Research. During the second quarter, investors pulled back slightly, leaving them with $2.10 trillion.

Since the financial crisis, investors have been drawn to hedge funds because they have the ability to bet on all types of markets and don't simply expect stocks to move up. "The thought now is that I need to have at least some of my capital with managers who have the flexibility and skill set to take advantage of unpredictable sideways markets," said Casey, Quirk & Associates' Celeghin