A great response! Blame the victims. The South Africans have used an old law from the Apartheid era.

South African miners charged with murder of 34 colleagues killed by police
South African workers arrested after a shooting at a platinum mine have been charged with killing 34 of their colleagues, despite confirmation that police committed the murders. The officers, who did not deny using guns, face no charges. 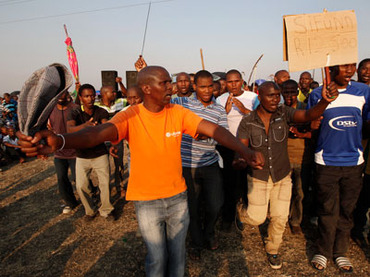 The Lonmin platinum mine in Marikana, in the country's North West province, made headlines on August 16, when protesters, who demanded their wages be raised to over $1,000 a month, clashed with police. The crackdown claimed the lives of 36 people – miners and two policemen, and left 78 injured.

All of the 270 arrested miners, including the six hospitalized, were previously said to be charged with attempted murder or public violence. But state prosecutor Nigel Carpenter increased the charges against them.
The miners are to be tried under the "common purpose" doctrine, which implies that all participants in a criminal activity can be charged for its consequences.
"This is under common law, where people are charged with common purpose in a situation where there are suspects with guns or any weapons and they confront or attack the police and a shooting takes place, and there are fatalities," Frank Lesenyego, spokesman for South Africa's National Prosecuting Authority, said.
The lawyers representing the Marikana strikers are expected to challenge the charges. A prior application for bail was rejected, and the hearing was delayed till September 6. Until then, the miners will remain in custody in three area police stations.

At the same time, the policemen involved in the deadly clashes at the Marikana mine will undergo a Commission of Inquiry investigation separately.
That is despite police commissioner Riah Phiyega's confirmation a few days after the tragedy that the 34 people were killed by police. However, police officers insist that they opened fire to defend themselves against a wave of strikers armed with machetes, who allegedly charged barricades. Prior to gunshots, the police used tear gas and water cannons.

However, leaked findings of victims' autopsies were published by the South African Star newspaper, and showed that the miners were shot in the back while running away.

The post-mortem results suggested that the strikers posed no danger to law enforcement at the time of the shooting.

An official spokesman refused to confirm or deny the accusations on what’s already being dubbed the Marikana Massacre – the most violent episode in South Africa’s history since the 1994 end of apartheid.
Posted by seemorerocks at 10:25