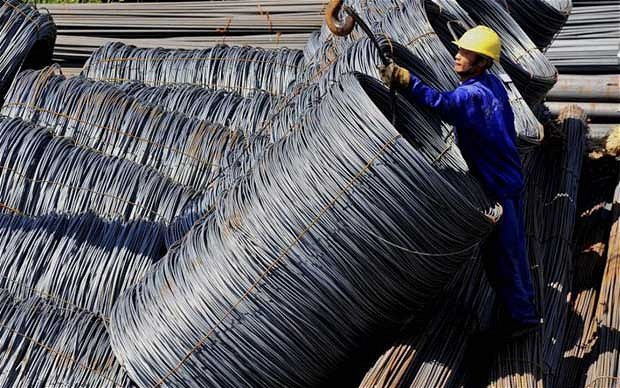 One Chinese province after another has stepped forward over the last fortnight to announce their plans, in what appears to be a propaganda effort to reassure the public that the economy is still on track.

Meanwhile, Wen Jiabao, the Chinese premier, promised over the weekend that the Chinese government would intensify its efforts to boost the economy in the second half of the year.

On a visit to Guangdong, the heartland of China's export industry, Mr Wen warned that "there will still be a lot of problems and uncertainties in exports going forward. The third quarter is a crucial period".

Analysts said the government could now steer the value of the yuan lower, after a gain of 4.7pc last year against the dollar. Further export tax rebates could also be used to bail out manufacturers.

China's export sector is suffering from anaemic demand from Europe and the United States. In the first seven months, exports rose 7.8pc, while imports rose 6.4pc, leaving China in danger of missing its 10pc target for trade growth this year. July's exports grew at the lowest pace since 2009 and there are reports of factory workers leaving and returning to their home provinces for the first time since the financial crisis.

The Telegraph has travelled to the south of China over recent days to witness a slowdown in the coastal economy and in the export sector, and also to areas which are flourishing with new investment, and where the local economy is booming. The picture appears mixed. China, geographically almost the same size as the Eurozone, appears to be struggling in some areas and flourishing in others. A new inland corridor, running from Liaoning in the north to Guizhou in the south, through cities such as Wuhan and Changsha, is booming.

In response, Guangdong has unveiled 177 "core projects" worth 1 trillion yuan, joining a long list of local governments to announce "stimulus" plans. The huge cities of Chongqing and Tianjin, meanwhile, both said they would spend 1.5 trillion yuan, while Guizhou, one of China's poorest provinces, has said it will spend 3 trillion yuan on eco-tourism and creating a series of national parks.

The central government, meanwhile, said it would spend to plough 2.4 trillion yuan into reducing carbon emissions and energy conservation programmes over the next three years, and has already set aside 26bn yuan in subsidies to encourage consumers to switch to low-energy appliances.

The role call of announcements may be a signal that after half a year of fine-tuning monetary policy, the government is preparing to take more drastic measures.

While the Communist party had pencilled in slower growth of 7.5pc for this year, in order to restructure and rebalance the economy, there are indications that China may suffer, or may already have suffered, a "hard landing", where growth would fall to below 7pc.

"A hard landing in China would look like the fourth quarter of 2008 and the first quarter of 2009 when exports collapsed, factories had no orders and migrant workers were laid off by the tens of millions," says Wang Tao, an economist at UBS.

Mr Wen said many "negative factors" would continue "to affect stable economic operations in the second half" and that the difficulties of boosting growth are "still relatively large".

"Facing the current difficulties, we have to improve the operating environment for companies and enhance the corporate confidence," he said.

Many of the new stimulus projects appear to simply be restatements of existing commitments, and there was no indication of how they will be funded.

However, economists at Barclays Capital said that, unlike the boom in infrastructure spending after the financial crisis, the projects are aimed at boosting China's technological capabilities and its domestic consumption.

"These plans should have a reasonable 'quality control'," they said, in a note, adding that whether or not the plans were new or old, bringing them forward would be "helpful in offsetting the headwinds from external demand deceleration".

Several economists remain confident that China will continue its blistering growth for several years to come. Justin Yifu Lin, the former chief economist at the World Bank, predicted that the Chinese economy would continue its high growth rate for "another 20 to 30 years".

Mr Wen also said that, despite the problems, China's "economic fundamentals have not changed". He added: "We have a lot of good conditions and optimistic factors that will help stabilise growth".