The Chinese "hard landing" and coal mining in New Zealand

90 seconds at 9 am: Chinese slump (news with Bernard Hickey)


More on the collapse of coal mining in New Zealand.... 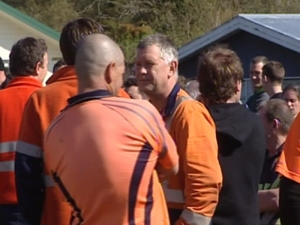 Solid Energy announced yesterday it would suspend operations at the mine, which has the potential to affect about 400 workers around the country.

Grey District Mayor Tony Kokshoorn told TV ONE's Breakfast this morning the community was "hanging by a thread", with the announcement following years of struggle for the mining industry.

"It's been a tough three of four years with the recession, coal prices dropping and the Pike River explosion."

More than 250 staff at Spring Creek Mine have been suspended while their fates are decided.

Sixty-three jobs are also expected to go at Huntly East Mine while another 77 are to go from other areas of the business, including at head office in Christchurch.

Two months ago, Solid Energy chief executive Don Elder and chairman John Palmer met with mine workers to tell them development of Spring Creek mine would go ahead as well as the development of the new Liverpool mine in Greymouth.

West Coast MP Damien O'Connor said before the announcement it seemed as if uncertainty within the industry had gone.

"We thought we had got over that and were looking to a sustainable prosperous future."

Solid Energy is one of four energy companies in the Government's partial assets programme, and O'Connor said the cut backs were about repositioning the company for sale.

"The Government is determined to sell down half of Solid Energy," he said.

"The company has to cut back all its costs, make the company look rosy on the books, and make sure it has a big amount of coal in reserve so it can offer a good deal to prospective investors."

O'Connor said even though the suspension was a temporary adjustment, it meant people would be forced to seek jobs in Australia.

"Miners will pack their bags and go to Australia and that will be bad for our region and the country.

"The Government is saying this is the way to save the economy, yet this is taking a real hit and we could lose a huge number of valuable and skilled employees."

Kokshoorn said the community would not give up hope until Solid Energy finalised the deal with "redundancy cheques in the mail".

"We are appealing to Solid Energy to have a hard look at the situation. We are saying don't take a knee-jerk reaction by drastically cutting jobs."

"At Spring Creek at the moment they only need another $70 million to develop the block, then they'll get a lot of coal out of it," said Kokshoorn
Posted by seemorerocks at 12:48