Death toll rises to 26 in Venezuela refinery explosion
A large explosion has struck Venezuela’s largest oil refinery, killing 26 people and injuring more than 80. The blast did significant damage to the plant as well as nearby houses and is thought to have been caused by a gas leak. 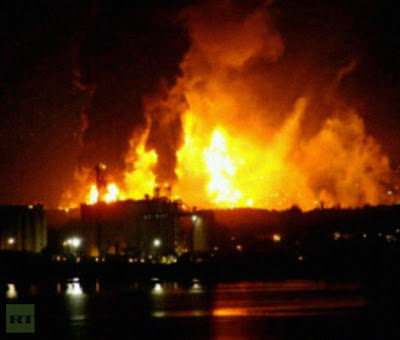 Among the dead include a 10-year-old boy, though 17 of the 26 who lost their lives were National Guard troops stationed at the refinery, Vice President Elias Jaua said after traveling to the afflicted area. He said authorities were working “to save the greatest number of lives.” At least 80 more were reported injured, nine of them seriously. Health Minister Eugenia Sader the other 77 had suffered light injuries and were released from hospital after receiving treatment.

President Hugo Chavez declared there would be three days of mourning and gave his condolences to the victims' families.

"This affects all of us," Chavez said while speaking on state television by phone. "It's very sad, very painful." He ordered a "deep" investigation to determine the cause of the blast.

The explosion occurred at approximately 1:07am local time (6:07 GMT) on Saturday, producing a tremor that was felt in nearby communities, smashing windows and damaging buildings. Massive balls of fire were seen over the refinery, with black plumes of smoke filling the sky.

"There was a gas leak," Energy Minister Rafael Ramirez told state TV. "A cloud of gas exploded … it was a significant explosion, there is significant damage to infrastructure and houses opposite the refinery."

“There is no risk of another explosion. At the moment we are concentrating our efforts on helping the injured," said Lugo.

Local authorities have restricted access to the refinery and the surrounding area in response to the blaze.

Ivan Freites, secretary of the United Federation of Oil Workers told state news that at 12:30am local time (05:30 GMT) a propane-butane leak was reported at the plant.

“The senior staff at the plant said they had used foam to control the leak and eliminate the risk of a fire,” said Freites. He added that the explosion could have been triggered by a problem with a gas valve that led to a pressure buildup.

The Amuay refinery produces955,000 barrels a day, making it one of the largest in the world. Despite the refineries economic importance, Venezuela‘s Oil Minister Rafael Ramirez said the country’s current fuel supplies were sufficient to guarantee there would be no major disruption in meeting domestic needs or continuing exports despite the blast