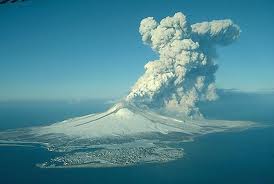 Alaska is known for pioneering, self-reliant residents who are accustomed to remote locations and harsh weather. Despite that, Gov. Sean Parnell worries a major earthquake or volcanic eruption could leave the state's 720,000 residents stranded and cut off from food and supply lines. His answer: Build giant warehouses full of emergency food and supplies, just in case.

For some in the lower 48, it may seem like an extreme step. But Parnell says this is just Alaska.

In many ways, the state is no different than the rest of America. Most people buy their groceries at stores, and rely on a central grid for power and heat. But, unlike the rest of the lower 48, help isn't a few miles away. When a fall storm cut off Nome from its final fuel supply last winter, a Russian tanker spent weeks breaking through thick ice to reach the remote town.

Weather isn't the only thing that can wreak havoc in Alaska, where small planes are a preferred mode of transportation and the drive from Seattle to Juneau requires a ferry ride and 38 hours in a car. The state's worst natural disaster was in 1964, when a magnitude-9.2 earthquake and resulting tsunami killed 131 people and disrupted electrical systems, water mains and communication lines in Anchorage and other cities.

"We have a different motivation to do this, because help is a long ways away," said John Madden, Alaska's emergency management director.

The state plans two food stockpiles in or near Fairbanks and Anchorage, two cities that also have military bases. Construction on the two storage facilities will begin this fall, and the first food deliveries are targeted for December. The goal is to have enough food to feed 40,000 people for up to a week, including three days of ready-to-eat meals and four days of bulk food that can be prepared and cooked for large groups. To put that number into perspective, Alaska's largest city, Anchorage, has about 295,000 people, according to the U.S. Census Bureau, and Juneau, its third largest, about 31,000.

It's not unusual for states that routinely experience hurricanes or other large-scale disasters to have supplies like water, ready-to-eat meals, cots and blankets. But Alaska is interested in stocking food with at least a five-year shelf life that meets the nutrition, health and cultural requirements of the state's unique demographics. That means, as part of the effort, trying to incorporate cultural foods like salmon for Alaska Natives as well as foods that would be more common in urban areas, state emergency management spokesman Jeremy Zidek said.

An estimated 90 percent of commodities entering Alaska are delivered through the Port of Anchorage. Air service is also a critical link to the outside world and generally the only way to reach many rural communities. A volcanic blast emitting a large amount of smoke and ash could disrupt supply lines by air and water for an extended period, Madden said, and an earthquake could knock out airport runways or ports. Those are just some of the disasters that might require emergency supplies.

Parnell has made disaster readiness a priority of his administration. His spokeswoman said he has experienced firsthand the devastation of natural disasters, including heavy flooding that knocked some buildings off foundations in Eagle in 2009, when he was lieutenant governor, and the Joplin, Mo., tornado last year. Parnell and his wife visited Joplin with members of the relief organization Samaritan's Purse.

Madden said Alaska's readiness is better than it once was and it continues to improve.

State officials have been working to encourage individual responsibility, with talks at schools and public gatherings. Emergency management officials plan to have a booth at the Alaska State Fair. A statewide disaster drill is planned for October.

Over the past year, the state has acquired or purchased water purification units and generators designed to work in cold climates, including units that could power facilities like hospitals, Madden said. Officials also are determining what the state needs in terms of emergency medical supplies and shelter, he said.

Delivery of the food stockpiles would be staggered over three years. It would be replaced after it's used or expired, and it's entirely possible that much of the food will never be needed. It is not clear what the state will do with the expired, unused food.

The project has a budget of around $4 million and hasn't generated any real controversy.

Allen Geiger, enjoying hot dogs from a street vendor Tuesday in Anchorage's Town Square Park, said he had no objections to the plan.

"It seems like an OK idea," Geiger said. "The scale of it is not too huge."