Scarcity of water and food in an over-populated world 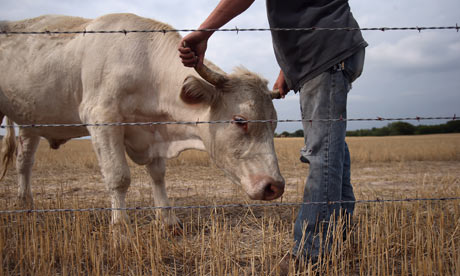 Leading water scientists have issued one of the sternest warnings yet about global food supplies, saying that the world's population may have to switch almost completely to a vegetarian diet over the next 40 years to avoid catastrophic shortages.

Humans derive about 20% of their protein from animal-based products now, but this may need to drop to just 5% to feed the extra 2 billion people expected to be alive by 2050, according to research by some of the world's leading water scientists.

"There will not be enough water available on current croplands to produce food for the expected 9 billion population in 2050 if we follow current trends and changes towards diets common in western nations," the report by Malik Falkenmark and colleagues at the Stockholm International Water Institute (SIWI) said.

"There will be just enough water if the proportion of animal-based foods is limited to 5% of total calories and considerable regional water deficits can be met by a … reliable system of food trade."

Dire warnings of water scarcity limiting food production come as Oxfam and the UN prepare for a possible second global food crisis in five years. Prices for staples such as corn and wheat have risen nearly 50% on international markets since June, triggered by severe droughts in the US and Russia, and weak monsoon rains in Asia. More than 18 million people are already facing serious food shortages across the Sahel.

Oxfam has forecast that the price spike will have a devastating impact in developing countries that rely heavily on food imports, including parts of Latin America, North Africa and the Middle East. Food shortages in 2008 led to civil unrest in 28 countries.

Adopting a vegetarian diet is one option to increase the amount of water available to grow more food in an increasingly climate-erratic world, the scientists said. Animal protein-rich food consumes five to 10 times more water than a vegetarian diet. One third of the world's arable land is used to grow crops to feed animals. Other options to feed people include eliminating waste and increasing trade between countries in food surplus and those in deficit.

The report is being released at the start of the annual world water conference in Stockholm, Sweden, where 2,500 politicians, UN bodies, non-governmental groups and researchers from 120 countries meet to address global water supply problems.

Competition for water between food production and other uses will intensify pressure on essential resources, the scientists said. "The UN predicts that we must increase food production by 70% by mid-century. This will place additional pressure on our already stressed water resources, at a time when we also need to allocate more water to satisfy global energy demand – which is expected to rise 60% over the coming 30 years – and to generate electricity for the 1.3 billion people currently without it," said the report.

Overeating, undernourishment and waste are all on the rise and increased food production may face future constraints from water scarcity.

"We will need a new recipe to feed the world in the future," said the report's editor, Anders Jägerskog.

A separate report from the International Water Management Institute (IWMI) said the best way for countries to protect millions of farmers from food insecurity in sub-Saharan Africa and south Asia was to help them invest in small pumps and simple technology, rather than to develop expensive, large-scale irrigation projects.

"We've witnessed again and again what happens to the world's poor – the majority of whom depend on agriculture for their livelihoods and already suffer from water scarcity – when they are at the mercy of our fragile global food system," said Dr Colin Chartres, the director general.

"Farmers across the developing world are increasingly relying on and benefiting from small-scale, locally-relevant water solutions. [These] techniques could increase yields up to 300% and add tens of billions of US dollars to household revenues across sub-Saharan Africa and south Asia."


Warming-Driven Drought Pushes Crop Prices To Record Levels, As We Burn 40% Of Corn Crop In Our Engines 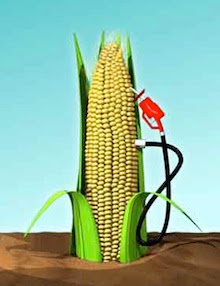 When will the madness stop? In a piece titled, “Nearly Half Of Corn Devoted To Fuel Production Despite Historic Drought,” Bloomberg editorialized:

Record-high corn prices should be sending a clear message to policy makers in Washington: Requiring people to put corn-based fuel in their gas tanks is a bad idea.

Climate Progress has been saying the same for many years (see “The Fuel on the Hill” and “Let them eat biofuels!“). Bloomberg notes:

The damage is far-reaching. Beef and pork producers are slaughtering their stocks at a record pace to cut use of corn feed that costs two-thirds more than three months ago. This week, President Barack Obama told a campaign rally in Iowa that the federal government will buy $170 million of meat to prop up the market. U.S. cattle herds next year are forecast to be the smallest since 1952, a guarantee of more expensive food in years to come.

Researchers at Texas A&M University have estimated that diverting corn to make ethanol forces Americans to pay $40 billion a year in higher food prices. On top of that, it costs taxpayers $1.78 in subsidies for each gallon of gasoline that corn-based ethanol replaces, according to the Congressional Budget Office.

Burning some 40% of the U.S. corn crop was crazy enough before the record drought, but now it is just plain inhumane. As uber-hedge fund manager Jeremy Grantham put it this month:

What is this drought doing to the breakbasket of the world? AFP reported Tuesday:

US corn and soybean prices closed at new record highs Tuesday as a new survey showed worse-than-expected crop damage from a brutal drought across the country’s central breadbasket…..

And remember, while this drought may be a record-setter now, if we keep taking no action to reduce carbon pollution, it’ll be the normal climate by my mid-century.

By then, humanity will be desperately trying to figure out how to feed another 2 billion people while dealing with extreme weather beyond anything humans have experienced during the period large-scale farming that (barely) fed ever-growing populations. See “Climate Story of the Year Decade: Warming-Driven Drought and Extreme Weather Emerge as Key Threat to Global Food Security.”

As an aside, conservatives like to claim that it is environmentalists who gave us our current biofuels policy, but in fact I never have met an environmentalist who thought we should mandate anywhere near the current amount of corn ethanol.

The only reason environmentalists and clean energy advocates even tolerated energy deals with corn ethanol mandates is the hope that jumpstarting the infrastructure for corn ethanol would pave the way for next-generation cellulosic ethanol.  That turned out to be a mistake (see “Are biofuels a core climate solution?“).

We have gone far beyond what is tenable.  Yes, the energy-intensive nature of food production means that oil prices will tend to rise in tandem with food prices, thus increasing the profitability of biofuels.  And yes, we are a rich country, the  breadbasket of the world, politically far more impervious to higher food prices than higher oil prices.

But as population grows, developing countries’ diets change, and the extreme weather of the last couple of years increasingly becomes the norm in a globally warmed world, food insecurity will grow and our biofuels policy will, inevitably, collapse.  It must.