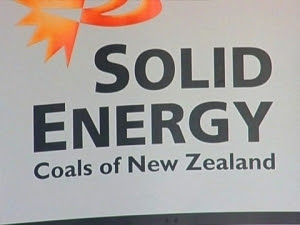 Writedowns on the value of its underground coal mines, renewable energy projects and experimental underground coal seam gas plant have pushed Solid Energy to a $40.2 million loss, although underlying earnings after tax were 16% higher than the previous year.

The $99.2 million underlying earnings figure excludes $151.7 million of writedowns and was described by outgoing chairman John Palmer as "good in a deteriorating market."

The company is using the writedowns, based on slumping global coal prices, to justify as many as 370 job losses at its Huntly East and Spring Creek underground mines, and in other parts of the business, including head office.

The restructuring was announced Wednesday, ahead of today's profit release.

The government has already signalled that Solid Energy, one of five SOEs slated for partial privatisation, is off the list for a share float while it works to get back on track financially. But Palmer said this showed why Solid Energy should be partially privatised.

"It's ironic, given the issues around Solid Energy today is that if you wanted the best reason for partial privatisation, then the commodity nature of the business and its dramatic turnaround in fortunes is the very best reason."

Such a risk profile was "unsuited to total Crown ownership," said Palmer, expressing "some regret" at leaving the Solid Energy board after six years as the company faces a difficult couple of years.

While revenues for the year increased 18% to $978.4 million, that was partly because coal due for shipment from Lyttelton Port before the end of the last financial year were delayed by the June 2011 earthquakes.

Earnings before interest, tax, depreciation and amortisation were just $44.9 million for the year to June 30, a 78% drop from the previous year's $200.8 million.

While the company has not released audited accounts to back today's profit announcement, a simplified financial results table also shows that gearing has rising to 42% from 30% a year earlier, reflecting $250 million of capital expenditure over the last four years.

Solid has cancelled some $100 million of capex for the current financial year.

Palmer said the company's financial situation would be "challenging and is worse than during the 2008 global financial crisis."

"In 2008-09, when US dollar export prices collapsed, the New Zealand dollar followed. Coal prices rebounded relatively quickly in the following year, whereas this time, with a high New Zealand dollar, we expect prices to be weak for a prolonged period."

"The company has made a significant investment developing renewable energy businesses," said Palmer. "The harsh reality is that other fuels are far more competitive in the current financial environment. We took a long run of these businesses, which relied on a sustained price premium which has largely failed to materialise."

As a result, the company is selling its bio-diesel business, which it has written down from $17.7 million to $8.7 million, and its Nature's Flame wood pellet burner fuel manufacturing unit from $37.5 million to $13 million.

The book value of the Spring Creek mine has almost halved from $137.3 million to $73 million, while Huntly East, on which major capital expenditure has been cancelled, sees its book value fall by $33.8 million to $32.1 million.

Solid is also writing off the $18.5 million it spent developing an underground coal seam gas unit at Huntly, although it intends establishing new UCG operations in larger coalfields in Taranaki as part of its turnaround plan.

A further $22 million of on-off costs were also declared, including $9.5 million on the value of Spring Creek stores and Nature's Flame inventory and onerous contracts.

On top of that, there was an after-tax impact of $9.1 million, caused by backing out tax losses relating to Spring Creek, which the balance sheet restructuring cancels out.