Clad in purple, Hillary Clinton took on the Trump administration Tuesday in one of her first public speeches since she devastatingly lost the presidential election.

Zero Hedge,
29 March, 2017
Under the banner of hashtag-inclusion, AP reports, Clinton criticized Republicans on everything from health care - calling last week's failure of the GOP health care bill, "a victory for all Americans," to the shortage of women appointees in top administration positions - declaring herself appalled at a much-circulated photo showing an all-male group of Republican lawmakers last month negotiating women's coverage in health care legislation.
Cracking jokes about her November defeat and her months out of the limelight since, Clinton spoke to thousands of businesswomen in San Francisco, joking there was no place she'd rather be, "other than the White House."

"I mean, it's not like I didn't know all the nasty things they were saying about me. I thought some of them were kind of creative," she said. "But you just have to keep going."

Without mentioning President Donald Trump by name, Clinton faulted the Republican presidential administration repeatedly, including calling its representation of women in top jobs "the lowest in a generation."

She rebuked White House press secretary Sean Spicer, again not by name, for hours earlier Tuesday chiding a black woman journalist during a news conference for shaking her head.
"Too many women have had a lifetime of practice taking this kind of indignity in stride," Clinton said.

She ended by urging voters to resist Trump policies that she said included suspicion of refugees and voter suppression in some areas.

"These are bad policies that will hurt people and take our country in the wrong direction," Clinton said, relaying what she had become one of her mantras since the November election.

"It's the kinds of things you think about when you take long walks in the woods," she said. "Resist, insist, persist, enlist."

Seems like a little different message from that of the campaign "stronger together" or her concession speech...

"I still believe in America, and I always will. And, if you do, then we must accept this result and then look to the future. Donald Trump is going to be our president. We owe him an open mind and the chance to lead."

Still, no matter what, it appears no matter what the message that The Clintons and The Democrats try to churn out,support remains dismal...

Elites dust off "continuity of government" playbook to stay in power


The shadow government has expanded its “continuity of government” powers to ensure its survival amid the presidency of Donald Trump – and the worldwide populist revolt that’s transferring power back to the people:

Over60% Of Republicans And Independents Believe Trump Was Surveilled By Obama

As Devin Nunes (R-CA) faces calls from Democrats to step down from his role as Chairman of the House Intelligence Committee due to concerns over his "impartiality", a new poll from CBS News reveals that nearly three-quarters of Republicans and half of Independents believe President Trump’s claim that former President Obama wiretapped him during the 2016 campaign. 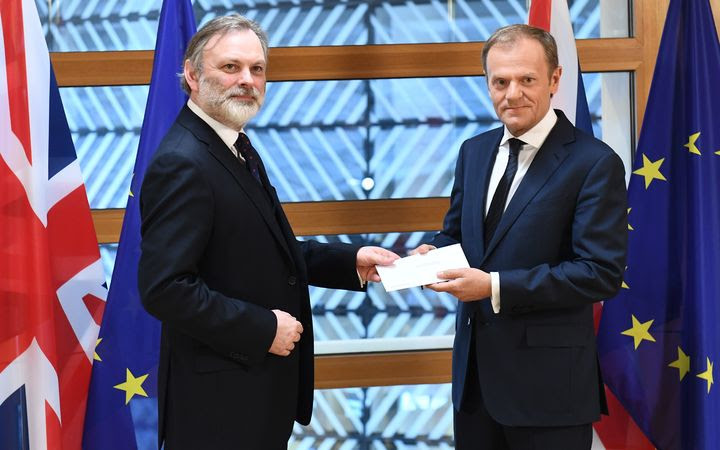 Prime Minister Theresa May has formally triggered the process of leaving the European Union, declaring there was no turning back

Britain's ambassador to the EU Tim Barrow, left, delivers the formal notice of the UK's intention to leave the bloc to European Council President Donald Tusk in Brussels. Photo: AFP

In one of the most significant steps by a British leader since WWII, Mrs May notified EU Council President Donald Tusk in a hand-delivered letter that Britain would quit the club it joined in 1973.

"The United Kingdom is leaving the European Union," Mrs May told parliament.
"This is an historic moment from which there can be no turning back."

Nine months after Britain shocked world leaders by unexpectedly voting to quit the bloc, the prime minister now has two years to negotiate the terms of the divorce before it comes into effect in late March 2019.

She is faced with the task of holding Britain together in the face of renewed Scottish independence demands, while conducting arduous talks with 27 other EU states on finance, trade, security and other complex issues.

The outcome of the negotiations will shape the future of Britain's economy, the world's fifth biggest, and determine whether London can keep its place as one of the top two global financial centres.

For the EU, already reeling from successive crises over debt and refugees, the loss of Britain is the biggest blow yet to 60 years of efforts to forge European unity in the wake of two world wars.

Its leaders say they do not want to punish Britain. But with nationalist, anti-EU parties on the rise across Europe, they cannot afford to give London generous terms that might encourage other member states to break away.

Mrs May's notice of the UK's intention to leave the bloc under Article 50 of the EU's Lisbon Treaty was hand-delivered to Tusk in Brussels by Tim Barrow, Britain's permanent representative to the EU, on the top floor of the new Europa Building in Brussels.

That moment formally set the clock ticking on Britain's two-year exit process. Sterling, which has lost 25 cents against the dollar since the June 23 referendum, jumped to $US1.25.

Mrs May signed the 6-page Brexit letter on Tuesday night, pictured alone at the cabinet table beneath a clock, a British flag and an oil-painting of Britain's first prime minister, Robert Walpole.

Her letter sought to set a positive tone for the talks though it admitted that the task of extracting the UK from the EU was momentous and that reaching comprehensive agreements within two years would be a challenge.

The prime minister wants to negotiate Britain's divorce and the future trading relationship with the EU within the two-year period, though EU officials say that will be hard given the depth of the relationship.

"We believe it is necessary to agree the terms of our future partnership alongside those of our withdrawal from the EU," Mrs May told Tusk in her letter, adding that London wanted an ambitious free trade agreement with the EU.

"If, however, we leave the European Union without an agreement the default position is that we would have to trade on World Trade Organisation terms," she said.
Mrs May signs the six-page Brexit letter on Tuesday. Photo: AFP / Julien Mattia / NurPhoto

'We already miss you'

Mrs May has promised to seek the greatest possible access to European markets but said Britain was not seeking membership of the 'single market' of 500 million people as she understood there could be no "cherry picking" of a free trade area based on unfettered movement of goods, services, capital and people.

Britain will aim to establish its own free trade deals with countries beyond Europe, and impose limits on immigration from the continent, May has said.
Mr Tusk said the EU would seek to minimise the cost of Brexit to EU citizens and businesses and that Brussels wanted an orderly withdrawal for Britain.

"We already miss you," said Mr Tusk who will send the 27 other states draft negotiating guidelines within 48 hours. "Thank you and goodbye."

Germany will strive in Brexit negotiations to make sure there is as little disruption as possible to the lives of European Union citizens living in Britain, Chancellor Angela Merkel said.

Stressing that she hoped Britain and the EU would remain close partners, Mrs Merkel said the prospect of Brexit made many people in Europe worried about their own personal future.

"This is the case especially for the many Germans and European citizens in Britain. Therefore, the German government will work intensively to make sure the effect on the everyday lives of those people is as small as possible," she said.

British newspapers' front pages on the formal triggering of Brexit. Photo: AFP
In recent months, German officials have made clear that they do not believe there is time to negotiate a bespoke transitional agreement for Britain that would come into force immediately after Brexit.

A huge number of questions remain, including whether exporters will keep tariff-free access to the single market and whether British-based banks will still be able to serve continental clients, not to mention immigration and the future rights of EU citizens in the UK and Britons living in Europe.

At home, a divided Britain faces strains that could lead to its break-up. In the Brexit referendum, England and Wales voted to leave the EU but Scotland and Northern Ireland voted to stay.

Scottish nationalists have demanded an independence referendum that May has refused. In Northern Ireland, rival parties are embroiled in a major political crisis and Sinn Fein nationalists are demanding a vote on leaving the UK and uniting with the Republic of Ireland.

Posted by seemorerocks at 12:22 No comments: