No US bases in Australia

Is Australia looking to its own strategic interests?

No Permanent U.S. Bases in Australia, Aussie FM Says
The United States will not seek permanent military bases in Australia and nor would hosting one be in Canberra’s interests, Foreign Minister Bob Carr said Aug. 25 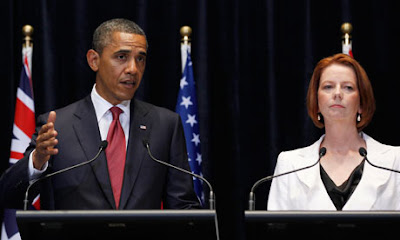 
Australia has welcomed long-term ally Washington’s plans for an enhanced naval presence in the Pacific and last year agreed to allow up to 2,500 U.S. Marines to be deployed to a barracks near the northern city of Darwin.

But Carr rejected the idea of a permanent U.S. military base in Australia.

“In fact, the Americans will not seek it because of the cost involved at a time when they are going to have to produce more cuts in their defense spending,” he told Sky News. “And second, because it doesn’t fit with the way they project power. But above all ... it’s not in Australia’s interest.”

Carr said what Canberra liked about U.S. troops training in the country was that it was “in and out.”

“They’re here, and they’re out,” he said, adding: “I don’t think Australians will be comfortable defining themselves with permanent American bases.”

Washington’s plan to bolster its military presence in the strategically vital Asia-Pacific comes amid concerns about China’s increasing assertiveness.

The deployment of U.S. Marines to Darwin, the first of whom touched down in April on a six-month rotational basis, has irked Beijing, which has described the Marines’ presence as proof of a “Cold War mentality.”

Carr said Canberra understood China’s military modernization and accepted that its rise in economic power would be matched by a defense upgrade.

“But just as we accept that, you, the Chinese, must accept that we are a small population holding a large continent and will, as we have done historically, look to an alliance with the United States,” he said. “But we reject utterly any notion of containing China. We look to engage with China
Posted by seemorerocks at 13:40