Nine years later the murder by Israelis of Rachel Corrie and the bulldozing of palestinian homes may seem to be eclipsed by an avalanche of events that are upon us now.

But to me, this is still shocking even if the whitewashing by the Israelis is unsurprising. We must never get desensitised to these individual acts of extreme injustice.

Israeli court acquits IDF in 2003 death of American pro-Palestinian activist Rachel Corrie
An Israeli judge has exonerated a military investigation that acquitted the IDF of the killing of a US activist by a bulldozer. The judge reiterated that the death was “an accident,” while the victim’s family insists she was purposefully run over. 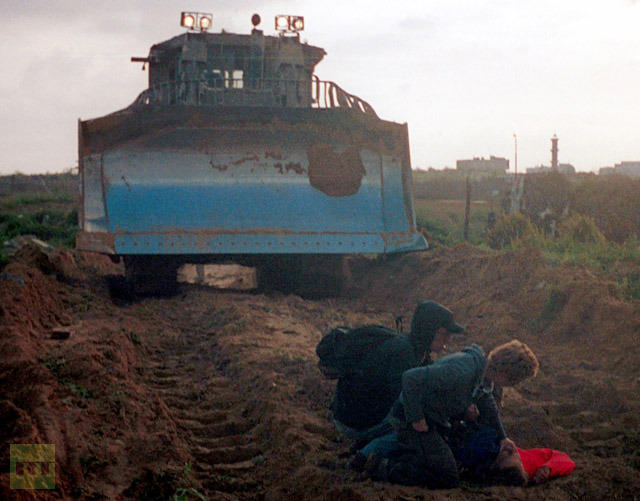 Nine years after US activist Rachel Corrie was crushed to death by an Israeli army bulldozer, her family has been handed a verdict in their civil lawsuit against Israel.

The court ruled that the state was not at fault for Corrie’s death and that an earlier military investigation, which cleared troops of wrongdoing, was conducted appropriately. It further stated that there was neither intent nor negligence involved.

After hearing the verdict, Rachel's mother Cindy said that she was deeply saddened, but expected that the IDF soldiers would be granted systemic impunity.

"Now we know that the protection for soldiers extends to the court," she told reporters outside the court. “At least we have had access to a court system, which most Palestinians are denied," she said.

“While not surprising, this verdict is yet another example of where impunity has prevailed over accountability and fairness,” attorney for the Corrie family Hussein Abu Hussein said in a statement posted on the Rachel Corrie foundation website.

On March 16, 2003, the 23-year old American was crushed and killed by an Israeli bulldozer while attempting to stop the vehicle from destroying Palestinian homes on the Egypt-Gaza border. Corrie was a volunteer with the International Solidarity Movement, and was one of eight American and British activists attempting to prevent the demolition.

The Israeli army had been conducting systematic demolitions in the densely populated area in an attempt to halt gun and mortar attacks against soldiers and Jewish settlers.

An investigation by an Israeli military court cleared the IDF of wrongdoing, concluding that Corrie’s death was an accident and that she was at fault for endangering herself.

“Rachel Corrie was not run over by an engineering vehicle but rather was struck by a hard object, most probably a slab of concrete which was moved or slid down while the mound of earth which she was standing behind was moved,” the IDF report said.

The driver, whose name has never been disclosed, insisted he had not seen the activist despite her wearing an orange jacket and being clearly visible. The Corrie family was unable to take him to court, as the Israeli Supreme Court has upheld a decision to shield him from prosecution.

Eyewitness accounts from Rafah claimed that the driver of the bulldozer was aware that Corrie was in front of the vehicle, but continued to demolish the house and intentionally crushed her in the process.

“The bulldozer went towards her very slowly, she was fully in clear view, straight in front of them,” witness Tom Dale of Lichfield, Staffordshire, said.
No charges were brought against the driver or his superiors, and the case was closed.

Unsatisfied by the IDF’s report, the Corrie family launched a civil case against the state of Israel in March 2010, accusing its military of either intentionally killing Corrie, or of gross negligence.

The court ruling exonerated the Israeli military investigation, and denied any malicious intent or negligence on the part of the IDF.

“Rachel Corrie was injured as a result of her prohibited action, for which she is solely responsible, due to her considerable negligence and lack of caution,” the Israeli Justice Ministry said in a statement.

The Corrie family's case is the first civil lawsuit on behalf a foreigner harmed by the IDF to have been concluded in a full civilian trial. Other cases have resulted in out-of-court settlements.

The family claimed they spent over $200,000 of their own savings to fly in witnesses, attend hearings and translate over 2,000 pages of court transcripts. Their case was supported by an army of volunteers, including lawyers, translators and media activists.

The Corries were seeking a symbolic $1 in damages, along with compensation for costs incurred during litigation.