I wasn't going to mention the Empire State Building shooting – but now it transpires that this is a story of collapse in the USA – what happens to someone when their world falls apart.

It transpires that the NYPF was responsible for 10 of the 11 people shot.

Somehow, I doubt if the details will make it into the mainstream media. 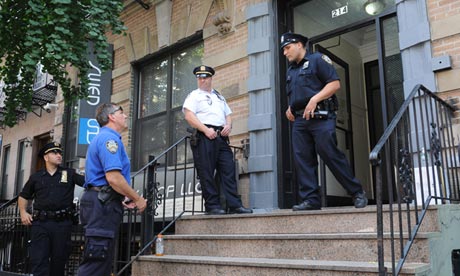 A fuller picture of the shooter who sparked panic at the Empire State Building emerged Saturday, depicting a Willy Loman-like figure who would still dress for work despite losing his job a year ago.

As the New York police department faced questions over how officers managed to injure nine bystanders during the confrontation with Jeffrey Johnson, details of the gunman's troubled back story began to be known.

The assassination of his former boss – the event that led to Friday's chaotic scenes on the doorstep of the New York landmark – appears to have taken place following a year of brooding over the loss of his job.

Johnson had worked as a designer of women's clothing at Hazan Imports for six years before he was let go due to downsizing at the firm.

Neighbours say that even after he was laid off by the firm, Johnson would leave his apartment in Manhattan's Upper East Side every morning dressed in a suit.

Some days the 58-year-old would merely go to a nearby McDonald's for breakfast before retuning back home.

"He was always alone," said Gisela Casella, who lived a few floors above him. "I always felt bad. I said: 'Doesn't he have a girlfriend?' I never saw him with anybody."

Apartment superintendent, Guillermo Suarez, said he lived alone in a one-bedroom apartment that he was subletting. He called him a "very likeable guy" who always wore a suit.

But police say that he harboured a grudge against his former firm's vice president Marc Ercolino.

He blamed the one-time colleague for his unemployment, complaining that Ercolino failed to promote his line of women's t-shirts.

The workplace dispute was to cost Johnson's former colleague his life.

Dressed in an olive suit and carrying a briefcase, the laid-off employee walked up to Ercolino early Friday and shot him once in the head and then in the torso without saying a word, eye-witnesses said.

But the two men's dispute was known within the firm, and even spilled out into the courts.

Police commissioner Ray Kelly said Johnson had gone back to his former place of work regularly since being laid off.

There was a "confrontation with Ercolino virtually every time he went back", CNN quoted Kelly as saying.

He added that both men had filed harassment complaints against each other in April 2011.