Taleban warns more Kiwis will die
The Taleban says more New Zealand soldiers will be killed if they are not withdrawn from Afghanistan immediately. 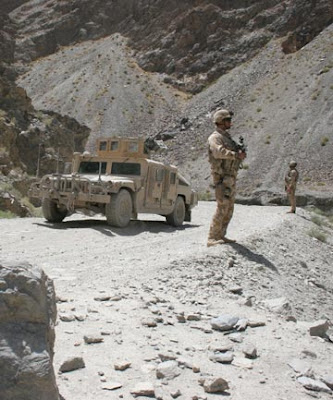 The threat comes a week after Corporal Luke Tamatea, Lance Corporal Jacinda Baker and Private Richard Harris were killed by a roadside bomb in the province of Bamiyan, where the 140-strong Kiwi Provincial Reconstruction Team (PRT) are based.

The attack happened northwest of Do Abe, near where lance corporals Rory Malone and Pralli Durrer, both 26, were killed in a fire fight two weeks earlier.

The Taleban claimed responsibility for both incidents.

"New Zealand has made itself a target of our attacks. We have a message for the New Zealand people, we warn you that if you don't get out of our country, many more of your soldiers will be killed," he said.

"The New Zealand Government and its military know that they will face more attacks."

Mujahid said every single member of the PRT were a target because they had "invaded" Afghanistan and they were the "enemy".

"New Zealand has not sent us workers or engineers. They have sent their soldiers to us.

"The soldiers don't do the work of aid or assistance. The soldiers come for secret purposes and they carry guns. They have military equipment and they have entered our country illegitimately, illegally as an invading force," he told Radio New Zealand.

"We know that it has become more dangerous in that part of the [Bamiyan] province. But, look, this is what's happening across Afghanistan every day. This is just a usual day in Afghanistan," he said.

"But at the same time, the second point is, there is a war of words and propaganda. And naturally the Taleban would want to unsettle the public and the Government of New Zealand with statements like this," he said.

The deaths of Tamatea, 31, Baker, 26, and Harris, 21, last week brought the total number of Kiwis soldiers who died in Afghanistan to 10.

A service for the three soldiers was held at Burnham Military Camp, south of Christchurch, on Saturday.

Prime Minister John Key last week attributed the latest attack to bomb makers who were part of a new insurgent group New Zealanders had been targeting.

He said specialist troops had arrived in Afghanistan following Durrer and Malone's deaths, and there were plans to send a small contingent of SAS.

The SAS could help with intelligence and planning for a counterstrike against those responsible for the death of the five Kiwi soldiers this month, but Key would not send an SAS fighting unit.

Any counterstrike was likely to be undertaken by special forces from other countries, probably the United States, Defence Force chief Lieutenant-General Rhys Jones said.