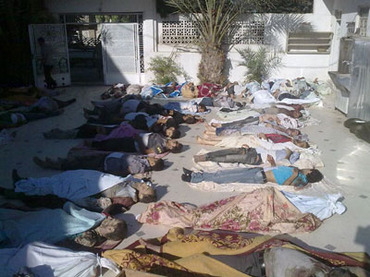 A gruesome video has emerged showing a man navigating a sea of bodies in what he says is a mosque complex in Daraya, a working class Sunni Muslim town of 200,000 located southwest of Damascus. Amid repeated calls of Allahu Akbar, the individual filming the scene proclaims there are “more than 150 martyrs in this mosque in Daraya so far.”

Blood is conspicuously absent in the dimly-lit room, as the bodies were evidently moved to the Abu Auleiman al-Darani mosque post mortem.

Anti-government activists claim many of the corpses bore the marks of sniper fire, while others had been shot "execution-style" in house-to-house raids.

The video’s authenticity could not be independently verified, and the details of just what happened during the five-day offensive in Daraya remain sketchy at best.

The Local Co-ordination Committees (LCC), a network of activists on the ground in Syria, accused government troops of summarily executing people and burning their bodies. The LCC alleges that 400 people died in violence throughout Syria on Saturday alone, most of those deaths taking place in Damascus and its southern belt.

The UK-based Syrian Observatory for Human Rights (SOHR) said 320 people had been killed throughout the five days of intense clashes in Daraya, with many allegedly dying in house-to-house raids on Saturday.

Syrian government newspaper Ath-Thawra reported on Sunday that the armed forces "cleared the town of Daraya of the remnants of armed terrorist groups which committed crimes that traumatized the citizens of the town and destroyed public and private property."

Despite the conflicting figures on the number of dead, their identities, and the circumstances in which they were killed, what remains clear is that rebel fighters have regularly been repelled in their attempts to reclaim lost ground on the southern outskirts of Damascus following a broader government offensive which successfully reclaimed the bulk of the capital by late July.

Daraya has become the focal point of this offensive to further drive rebels from the area, though fighting erupted on the outer edges of the capital as well. Government tanks were reportedly deployed on the Damascus ring-road in the southern neighborhoods of al-Lawwan and Hahr Aisheh, as fierce clashes continued unabated in the eastern Ghouta suburbs of the capital deep into Saturday night, Reuters reports.

Activists have described the battle of Daraya and greater Damascus as a new bid to crush "once and for all" the anti-government insurgency. The new government offensive appears to be working, as activists have admitted that many rebel forces had have had to resort to hit-and-run operations from their bases in the countryside upon being driven out of the capital and its urbanized environs.

For the al-Jazeera take on this story GO HERE

The British Daily Star has reported in their article, "SAS HUNT BIO ARMS," that, "nearly 200 elite SAS and SBS troops are in or around Syria hunting for Assad’s weapons of mass destruction." The Star also claims that the SAS are accompanied by British MI6, US CIA, and both French and American soldiers. This after US' Barack Obama made comments claiming the US would military intervene if Syria so much as "moves them [unconfirmed WMDs] in a threatening fashion."
Like Iraq, the West has provided no evidence that such weapons even exist, let alone prove that the weapons have or even would be used against terrorists operating across Syria. And like in Iraq, another false pretext is being developed through leaks, and limited hangouts in an attempt to prime the public for a desperate intervention designed to bolster the West's collapsing terrorist front.
The West also categorically lacks any semblance of an international mandate to act militarily within Syria - meaning that if SAS soldiers are in Syria, they are in egregious violation of international law.

Image: The symbols for nuclear, biological, and chemical weapons. The West is the undisputed champion of deploying each of these weapons of mass destruction against their enemies - from nuclear bombs upon Japan, to depleted uranium and white phosphorus upon Iraq, to Agent Orange all across Vietnam - it stands to reason that these weapons would eventually end up in the hands of the their proxies as well.
....

Should chemical weapons "move" or be "used" in Syria, it will be in the form of a false flag attack, with weapons brought in by Libyan terrorists now confirmed to be leading the so-called "Free Syrian Army" with US, UK, European, and Gulf State weapons, cash, and logistical support.
US, British, French, and Gulf State-backed Al Qaeda militants have been attempting to infiltrate and violently overthrow the government of Syria, as well as terrorize the population into submission in a brutal, year and half long terror campaign. In July and August, NATO-backed terrorists attempted to seize Syria's two largest cities, Aleppo and Damascus only to be dealt severe losses and a rebound of Syrian forces enjoying increasing public support for ending the violence.
The Syrian conflict was engineered by Western interests as early as 2007.
Posted by seemorerocks at 11:48