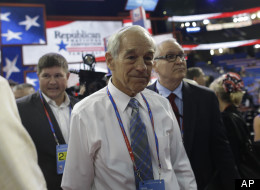 The fight was over the unglamorous rules process that dictates how delegates are apportioned in each state. Paul didn't sweep the ballot boxes in state caucuses and primaries, but his supporters quietly worked behind the scenes in an effort to take control of state parties and delegate assignments.

The RNC's rules committee adopted provisions that would bar this sort of insurgent takeover from happening in the future: Convention delegates would be bound to vote for the candidate who won statewide at the ballot box.

In other words, when there is a statewide popular vote, if the result is not winner-take-all, each candidate must get delegates in proportion to their percentage of the popular vote. The rule was proposed and pushed through the committee by lieutenants loyal to Romney. Some Republicans, including ones loyal to Romney,opposed the rule change, arguing it hurt grassroots activism.

Twenty Paul backers from Maine were also stripped of their spots as official delegates after the RNC concluded that their election was invalid.

On Tuesday afternoon, House Speaker John Boehner (R-Ohio) called for a full delegation vote on the rules, including the ones the Paul backers opposed. The voice vote of ayes and nays were equal in volume, but Boehner immediately gave it to the ayes, leading to loud boos and shouts from Paul supporters.

The dismissed Maine delegation was easy to spot on Tuesday. They were all wearingwhite baseball caps that read "Maine 2012" and had a picture of Paul. Before the vote on the rules, Paul supporters would frequently interrupt the proceedings with shouts of "Seat them now" (referring to the Maine delegation), "We were robbed," "President Paul" and "Point of order."After the vote, Paul supporters took to the hallways outside the main convention area and continued shouting and talking to reporters about how they believed they were robbed. Several of them said they may not support Romney -- and it could cause problems for Republicans in the fall.

"After the way they treated us, treated the state of Maine, treated us Republicans, they should be worried about how this is going to affect the election," said Erin Gail, a stripped Maine delegate.

Paul is with his backers, all the way. He is not speaking at the convention this year, because he denied the RNC's two conditions: that he allow his remarks to be vetted by RNC officials and that he fully endorse Romney.

“It wouldn't be my speech,” Paul told The New York Times. "That would undo everything I've done in the last 30 years. I don't fully endorse him for president."

On Tuesday, Paul told Fox News host Neil Cavuto that he was "undecided" on whether he would vote for Romney.

Gladys Lemley, an alternate delegate from West Virginia who is backing Romney -- although she originally supported Newt Gingrich -- agreed with the Paul delegates that the divide in the GOP could hurt the party in November. She said she wished the Paul backers would join with other Republicans and focus on defeating Obama.

When asked whether it could help Democrats win in November, she added, "It could. I remember back when Ross Perot ran. It hurt the Republican Party."

Posted by seemorerocks at 09:10