India Wheat futures rise as mills face shortage
Despite record harvest of wheat from Punjab and Haryana this year,wheat mills and food producers like biscuit makers are facing severe shortage of wheat , according to mill owners. 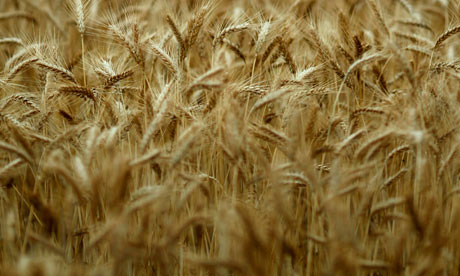 Shortage of wheat has also fuelled the prices of wheat- based products, like wheat flour, to rise by Rs. 3-4 per kg in last one month.In Punjab and Haryana, there are about 130 flour mills, which have requirement of 1.70 lakh tons of wheat per month.

Wheat futures are exhibiting up trend as wheat mills in Punjab and Haryana are facing severe shortage of wheat.

On Monday wheat futures at NCDEX exhibited upward movement for December trade. Last traded price was Rs.1587 per 100 kg with a positive change of 1.28 % at 11.30 IST.

Wheat prices have shot up by 35 percent in last one and half month to reach a mark of about Rs. 1,600 per quintal – said wheat traders.

How ever, despite these shortages India has projected 4.5 million ton wheat export this year. Last year it was 0.75 million tons as per the official data.

Despite record harvest of wheat from Punjab and Haryana this year,wheat mills and food producers like biscuit makers are facing severe shortage of wheat , according to mill owners. Shortage of wheat has also fuelled the prices of wheat- based products, like wheat flour, to rise by Rs. 3-4 per kg in last one month.

In Punjab and Haryana, there are about 130 flour mills, which have requirement of 1.70 lakh tons of wheat per month.

Poor In India Starve As Politicians Steal $14.5 Billion Of Food
Ram Kishen, 52, half-blind and half- starved, holds in his gnarled hands the reason for his hunger: a tattered card entitling him to subsidized rations that now serves as a symbol of India’s biggest food heist.

Kishen has had nothing from the village shop for 15 months. Yet 20 minutes’ drive from Satnapur, past bone-dry fields and tiny hamlets where children with distended bellies play, a government storage facility five football fields long bulges with wheat and rice. By law, those 57,000 tons of food are meant for Kishen and the 105 other households in Satnapur with ration books. They’re meant for some of the 350 million families living below India’s poverty line of 50 cents a day.

Instead, as much as $14.5 billion in food was looted by corrupt politicians and their criminal syndicates over the past decade in Kishen’s home state of Uttar Pradesh alone, according to data compiled by Bloomberg. The theft blunted the country’s only weapon against widespread starvation -- a five-decade-old public distribution system that has failed to deliver record harvests to the plates of India’s hungriest.

“This is the most mean-spirited, ruthlessly executed corruption because it hits the poorest and most vulnerable in society,” said Naresh Saxena, who, as a commissioner to the nation’s Supreme Court, monitors hunger-based programs across the country. “What I find even more shocking is the lack of willingness in trying to stop it.”

This scam, like many others involving politicians in India, remains unpunished. A state police force beholden to corrupt lawmakers, an underfunded federal anti-graft agency and a sluggish court system have resulted in five overlapping investigations over seven years -- and zero convictions.

India has run the world’s largest public food distribution system for the poor since the failure of two successive monsoons led to the creation of the Food Corporation of India in 1965. The government last year spent a record $13 billion buying and storing commodities such as wheat and rice, and expects that figure to grow this year.

Yet 21 percent of all adults and almost half of India’s children under 5 years old are still malnourished. About 900 million Indians already eat less than government-recommended minimums. As local food prices climbed more than 70 percent over the past five years, dependence on subsidies has grown.

From the government warehouses, millions of tons are dispatched monthly to states including Uttar Pradesh, which are supposed to distribute them at subsidized prices to the poor. About 10 percent of India’s food rots or is lost before it can be distributed, while some 3 million tons of wheat in buffer stocks is more than two years old, according to the government.

For article GO HERE
Posted by seemorerocks at 13:14