Millions suffer from late monsoons in India
Farmers wait for the government to declare drought as monsoons come too little, too late 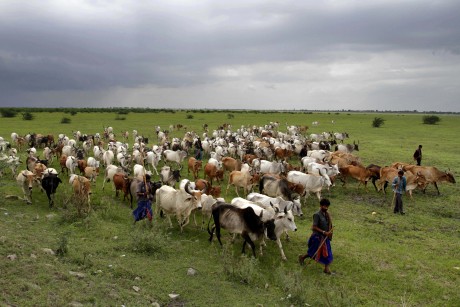 Indian shepherds walk with their cattle in Bagodara, about 75 kilometers (47 miles) west of Ahmedabad, India. The showers, which normally run from June to September in large areas of what is now a drought affected Gujarat, are crucial in a country where 60 percent of the population works in agriculture and less than half the farmland is irrigated. India's Meteorological Department has said it expects the country to get at least 10 percent less rain this year than during a normal monsoon, but large parts of the country have been hit much harder. (AP Photo/Ajit Solanki)(Credit: Ajit Solanki)

The farmer walks past muddy fields of stunted sugarcane and damaged rice paddies as a light drizzle falls. “Too late, too late,” he says of the rains he has been praying for since many weeks ago.

For nearly two months, Satyavan Narwal’s eyes scoured the heavens looking for the monsoon rains that would nourish his crops, but he found nothing and was left with parched earth. Now monsoon showers are soaking the fields — but late August is much too late for him.

This year’s fickle monsoon has played havoc with millions of Indian farmers. The showers, which normally run from June to September, are crucial in a country where 60 percent of the population works in agriculture and less than half the farmland is irrigated.

“Here farming is entirely on God’s mercy. If nature doesn’t bless us, the farmer can’t do anything,” Narwal says.

India’s Meteorological Department has said it expects the country to get at least 10 percent less rain this year than during a normal monsoon, but large parts of the country have been hit much harder.

In the northwestern state of Haryana, where Narwal’s family has farmed for generations, rainfall is less than half what it should have been. And when the rains finally did come, the crops were already nearly dead, fit only to be used as animal feed.

Shriveled old men share a water pipe and one of them points to the skies and shouts “What now, brother?” as they watch men and women carry damaged sugar cane to feed to their cattle. At the edge of fields, young men stand, hands on hips, shaking their heads in dismay. The village is 140 kilometers (87 miles) northwest of New Delhi.

By now the sugar cane crop should have been at least eight feet tall (2.4 meters tall). Rice paddy crops would have been lush and emerald green. Small patches of pearl millet, corn and sorghum would have dotted the landscape.

But the sun shone on with determination through all of July and most of August so that the cane is now only knee-high at best and most of the rice crop is burnt.

The lack of monsoon rains has also been partly to blame for the worst blackout in world history, which cut power to half of India last month. Large-scale farmers were using extra power to pump water from deep aquifers, and little electricity was being generated by hydropower projects.

Across the country rains in June and July — a crucial time for farmers — were nearly 20 percent below normal.

“Now some of the crop is so dry and damaged even our cattle won’t eat it,” says farmer Mahinder Singh, as he watches over the cleaning up of his sugar cane fields.

Punjab, the unofficial breadbasket of India, has received less than 40 percent of the rain it should have. Large swaths of western Gujarat and Maharashtra have been declared drought-stricken.

The government has said it’s not worried about food scarcity because millions of tons of rice and wheat from earlier bumper harvests are spilling out of state-owned granaries.

But for the average farmer, who lives and earns from season to season, a poor monsoon means that food must be carefully rationed because he has little money to spend.

With dreams of a good harvest, most small- and medium-scale farmers borrow money, often at exorbitant interest rates, from local money lenders to buy seeds and fertilizers and hire tractors to plow the fields.

“Now even they won’t give farmers money. They know there are no crops so there’s no chance of recovery,” said Ranbir Singh, as he cleaned up his three acres of dead sugarcane.

“Now I will need to borrow more money to feed myself, but lenders will hold back,” he said.

With nearly 70 percent of India’s population living in rural areas, farming is vital to the economy. A poor monsoon is expected to further dampen already disappointing growth this year, according Citigroup economist Rohini Malkani.

Poor agricultural output could result in growth as low as 5.4 percent in the current fiscal year, down from the bank’s earlier estimates of 6.4 percent, according to the economist’s August report.

“If drought conditions worsen, headline growth could come in lower at 4.9 percent,” she writes.

The federal government and many state governments have hesitated to declare a drought for fear of causing panic and because it requires them to assess each farmers’ losses and compensate them.

Farmers in Punjab, Haryana and western Uttar Pradesh state, which have not been given declarations of drought, are losing patience.

“What will it take for the government to declare a drought?” asks Narwal. “Will all the farmers have to die first?”

Agriculture Minister Sharad Pawar said Cabinet ministers would meet later this week to discuss the impact of the poor monsoon.

In Kathura village, however, Pankaj Aggarwal, the top district official, brushes aside talk of a drought, saying that the few recent days of rain will revive the crops.

Meanwhile, farmers lament the lack of government investment in irrigation and other infrastructure that could protect farmers from the vagaries of the monsoon.

“Where are the irrigation canals, the irrigation pumps, the electricity supply that the government keeps promising the farmers?” asked Dharmendra Malik, a farmer and activist in Uttar Pradesh.

“You have food grains in your stocks so you’re not worried, but that doesn’t mean you abandon 600 million of your people who tend the fields,” he said.