As we know this is already happening in the Arctic.

Antarctic may host methane stores
Large volumes of methane - a potent greenhouse gas - could be locked beneath the ice-covered regions of Antarctica, according to a new study. 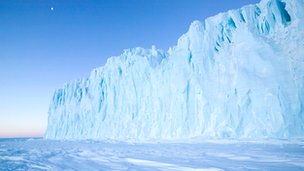 It says this methane could be released into the atmosphere as ice retreats, contributing to climate warming.

The findings indicate that ancient deposits of organic matter may have been converted to methane by microbes under the ice.

An international team reported the results in Nature journal.

Study leader Jemima Wadham, from Bristol University, said: "This is an immense amount of organic carbon, more than ten times the size of carbon stocks in northern permafrost regions.

"Our laboratory experiments tell us that these sub-ice environments are also biologically active, meaning that this organic carbon is probably being metabolised to carbon dioxide and methane gas by microbes."

They estimate that there could be hundreds of billions of tonnes of carbon stored in methane reservoirs under the ice sheet.

The authors say that the predicted shallow depth of these methane reserves means that they could be destabilised by climate change, and might act as a positive feedback on global warming.

Co-author Dr Sandra Arndt, also from the University of Bristol, said: "It's not surprising that you might expect to find significant amounts of methane hydrate trapped beneath the ice sheet.

"Just like in sub-seafloor sediments, it is cold and pressures are high which are important conditions for methane hydrate formation."

In their Nature paper, the authors comment that their "findings suggest that the Antarctic Ice Sheet may be a neglected but important component of the global methane budget".


Billions of Tons of Methane Lurk Beneath Antarctic Ice

This seems to have been known about for some time as witnessed by this video dating back to 2010. The video seems to have some relationship with a vegetarian group!

With ice shelves in Western Antarctica and the Peninsula already noted to be melting due to climate change, the additional release of methane could, due to its potency accelerate global warming beyond what scientists have described as an irreversible tipping point

See this, from earlier this year

Posted by seemorerocks at 13:33