This article is remarkable mostly because of who is saying it – Evans Pritchard of the Telegraph. He may say that Peak Oil 'may or maynot have been discredited but everything he says confirms Peak Oil.

Peak cheap oil is an incontrovertible fact
If the looming global oil crunch has been postponed for another decade or two as widely alleged, this is far from obvious in today’s commodity markets. 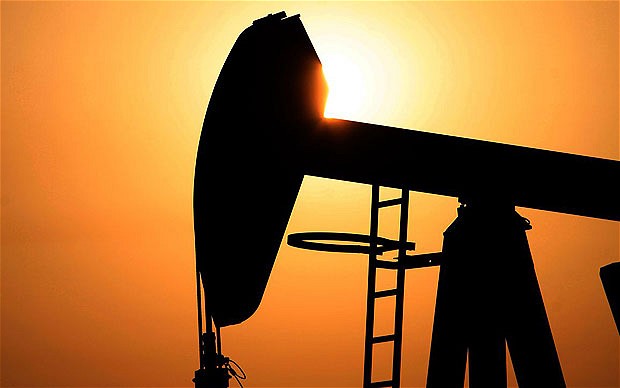 Brent crude jumped to $115 a barrel last week. Petrol costs in Germany and across much of Europe are now at record levels in local currencies.
Diesel is above the political pain threshold of $4 a gallon in the US, hence reports circulating last week that the International Energy Agency (IEA) is preparing to release strategic reserves.

Barclays Capital expects a “monster” effect this quarter as the crude market tightens by 2.4m barrels a day (bpd), with little extra supply in sight.

This is a remarkable state of affairs given the world economy is close to a double-dip slump right now, the latest relapse in our contained global depression.

Britain, the eurozone, and parts of Eastern Europe are in outright recession. China has “hard-landed”, the result of a monetary shock and real M1 contraction last winter. The HSBC manufacturing index fell deeper into contraction in July.

The CPB World Trade Monitor in the Netherlands show that global trade volumes have been shrinking for the last five months. Container shipping volumes from Asia to Europe fell 9pc in June. Iron prices have fallen by 30pc since April to $103 a tonne.

So we face a world where Brent crude trades at over $100 even in recession. Fears of an Israeli strike on Iran may have spiked the price a bit, though Intrade’s contract for an attack is well below levels earlier this year.

Iranian sanctions may have cut supply by more than the extra 900,000 bpd pumped by Saudi Arabia. Japan’s increased reliance on oil since switching off most of its nuclear reactors has played its part.

Yet the deeper force at work is the relentless fall in output from the North Sea and the Gulf of Mexico, endless disappointment in Russia because of Kremlin pricing policies, and the escalating cost of extraction from deep sea fields.

Nothing has really changed since the IEA warned four years ago that the world must invest $20 trillion in energy projects over the next 25 years to feed the industrial revolutions of Asia and head off an almighty crunch. The urgency has merely been disguised by the Long Slump.

We learned in the 2006-2008 blow-off that China is now the key driver of global oil prices, with consumption rising each year by 0.5m bpd -- now a total 9.2m bpd in a world market of 90m bpd. Demand is broadly flat in Europe and America.

So what will happen when China latest spending blitz gains traction? The regions have unveiled a colossal new spree on airports, roads, aeronautics, and industrial parks: a purported $240bn each for Tianjin and Chongqing, $160bn for Guangdong, $130bn for Changsha, and so forth. Sleepy Guizhou has trumped them all with $470bn. Your mind goes numb.

What will happen too when car sales in China surpass 20m next year, as expected by the China Association of Automobile Manufacturers?

Kamakshya Trivedi and Stacy Carlson from Goldman Sachs say a disturbing pattern has emerged where each tentative recovery in the world economy sets off an oil price jump that it turn aborts the process. A two point rise in global manufacturing indexes leads to a 30pc rise in oil prices a few months later.
“Oil has bec
ome an increasingly scarce commodity. A tight supply picture means that incremental increases in demand lead to an increase in prices, rather than ramping up production. The price of oil is in effect acting as an automatic stabilizer,” they said. If so, it is “stabilizing” the world economy in perma-slump.

World opinion has swung a little too cavalierly from the Peak Oil panic four years ago to a new consensus that America’s shale revolution -- and what it promises for China, Argentina, and Europe -- has largely solved the problem.

Much has been made of “Oil: The Next Revolution” by Harvard’s Leonardo Maugeri, who forecasts an era of bountiful supply and cheap oil as global output capacity rises by almost 18m bpd to 110m bpd by 2020.

Sadad al-Huseini, former vice-president of Saudi Aramco, has a written a testy rebuttal, arguing that Dr Maugeri assumes a global decline rate of 2pc a year from oil fields compared to the IEA’s estimate of 6.7pc. There alone lies the gap between crunch and glut.

“Much as all the stakeholders in the energy industry would like to be optimistic, it isn’t an oil glut by 2020 that is keeping oil prices as high as they are. It is the reality that the oil sector has been pushed to the limit of its capabilities and that this difficult challenge will dominate energy markets for the rest of the decade,” he said.

The US turn-around has certainly been astonishing. The country now meets 94pc of its natural gas needs. It may ultimately become an exporter. Oil output from North Dakota’s Bakken field and other basins in Texas and Pennsylvania may push US shale/tight oil output to near 5m b/d by 2020, greatly reducing US reliance on imports.

This is a magnificent feat of engineering and panache, a perfect example of why one should never write off the US. American industry is currently paying a fraction of European and Asian prices for gas, an invaluable cost advantage that is spawning a renaissance for the US petrochemical industry. “It is an incredible boom,” says Adam Sieminski, head of the US Energy Information Administration (EIA).

The shale revolution has profound implications for America’s role in the world and the global balance of power, but let us not get carried away. Oil experts noticed how many crews in the Bakken field were told to stand down when crude prices dipped earlier this summer. “Supposedly cheap shale turned out to be rather expensive shale in that, as soon as Brent fell to $90 per barrel, a large proportion of US shale oil in key regions seemed to lose all its rent,” said Paul Horsnell from Barclays Capital.

Early hopes of a shale bonanza in Poland have been dashed. Exxon has pulled out of the country. China has more promise but exploration has barely begun and the government fears that leaks from the Sichuan basin could contaminate the Yangtze River that feeds so many of the great Chinese cities.

One might add that some of Brazil’s non-shale fields are so far offshore in the Atlantic that helicopters have to be refuelled in the air. The drilling is through layers of salt that blind the imaging technology. Extraction is even harder and more costly than the task that overwhelmed BP at Macondo.

The proper conclusion is to thank our lucky stars that US shale has helped the world avert an immediate crunch. It buys us a little more time to build a new generation of nuclear power stations -- preferably based on thorium -- and to achieve the Holy Grail of unsubsidised grid parity in solar technology.

Peak Oil may or may not have been discredited. Peak Cheap Oil remains to haunt us.