Budget cuts leave Spanish fire crews high and dry
Austerity measures imposed by Spain’s central and regional governments have left fire brigades short-handed as they battle some of the worst forest fires in years, according to a conservationist and news reports from the parched country.. 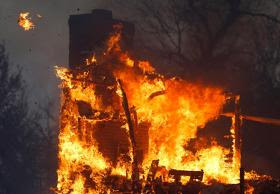 “This means important loss of forest cover, biodiversity and in many cases consequences for the local economy that is based on the products obtained from forests,” said María Melero de Blas of the forestry programme at the WWF conservation group in Madrid.

Melero de Blas said that in addition to a shortage of fire personnel, lack of cooperation between different levels of government has fuelled the fire threat. “The budget reductions in the fight against forest fires are not only the cause of the fires that are currently affecting Spain,” she said.

“Poor forest management and lack of coordination between regional and state forestry policies in the last years have influence on the risk of fire,” she said in a written response to questions sent by EurActiv. “Although Spanish law requires that forests have a management plan, only 13% have it. The same occurs in natural protected areas. Only 9% of [EU] Natura 2000 areas have a management plan.”

A 2008 report on the state of Spain’s natural areas says some 14 million hectares, or 28% of the country, is dedicated to natural areas under national or regional guidelines. However, the report also cited a lack of coordination in the protection of natural areas and lack of enforcement of national and EU laws on biodiversity protection.

Weather conditions have taken a toll in other parts of Europe. Hot and dry conditions have fuelled damaging forest fires in Portugal, southern France and Greece, as well as in the Balkans and Turkey.

The latest update from the European Forest Fire Information System shows extreme or high risk of fires extending from most of Spain, Italy, the western Balkans, Hungary and nearly all of Turkey. Burnt areas were reported in northern Spain and the Balkans.

In Greece this week, the cash-strapped government is investigating whether some of the nearly two dozen major wildfires may have been deliberately set as part of the ongoing unrest over austerity measures.

“There are indications, if not proof, that the fires on Chios are due to arson and we have therefore mobilised together with the fire service, the police and the National Intelligence Service,” Public Order Minister Nikos Dendias said, referring to areas on the eastern Aegean island that burned destroyed thousands of hectares of farm and forest land, the English-language website of the Greek daily Kathimerini reported.

Summer wildfires are nothing unusual in the parched Mediterranean region and authorities typically hire temporary firefighters to supplement regular brigades. But one Spanish forester and professional firefighter told Britain’s daily Guardian that the temporary forces have been cut because of austerity measures even as fires rage around the country.

“In 15 years of fighting fires I had never seen anything like it,” he said of blazes around the eastern town of Alcublas.

The EU’s European Drought Observatory reported drought conditions in parts of France, Germany, Spain and Italy as well as the North Atlantic Faroe Islands, the self-governing region of Denmark, contributing to the fire outbreaks. Spain expects to use about 60 billion euros, or $75 billion, of the 100 billion euros of bank rescue financing offered by European finance ministers in June, according to the Spanish economy minister, Luis de Guindos.

Next month could prove decisive for Spain and other ailing economies at the heart of the euro debt crisis. A proposal for an ambitious bond-buying program will be on the agenda of the central bank’s governing council meeting on September 6.

Posted by seemorerocks at 15:26