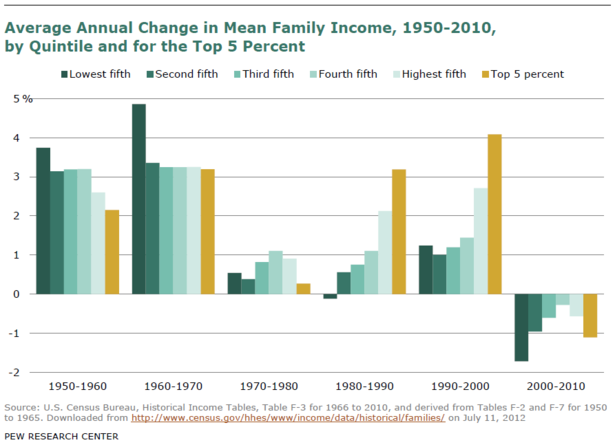 In the 60 years after World War II, the United States built the world's greatest middle class economy, then unbuilt it. And if you want a single snapshot that captures the broad sweep of that transformation, you could do much worse than this graph from a new Pew report, which tracks how average family incomes have changed at each rung of the economic ladder from 1950 through 2010.

Here's the arc it captures: In the immediate postwar period, America's rapid growth favored the middle and lower classes. The poorest fifth of all households, in fact, fared best. Then, in the 1970s, amid two oil crises and awful inflation, things ground to a halt. The country backed off the postwar, center-left consensus -- captured by Richard Nixon's comment that "we're all Keynesians now" -- and tried Reaganism instead. We cut taxes. Technology and competition from abroad started whittling away at blue collar jobs and pay. The stock market took off. And so when growth returned, it favored the investment class -- the top 20 percent, and especially the top 5 percent (and, though it's not on this chart, the top 1 percent more than anybody).

And then it all fell apart. The aughts were a lost decade for families, and it's not clear how much better they'll fare in the next.

None of this is new history.But it's helpful to have a crisp layout of what's changed.