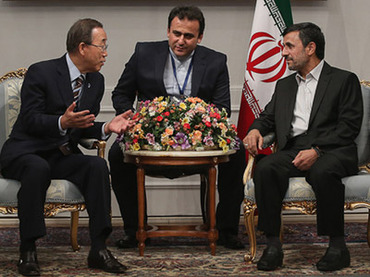 Ban is attending the summit despite objections from the US and Israel.
Iran is also expected to ask the Non-Aligned Movement (NAM) nations at the summit to back its call for a Syrian ceasefire.

The Non-Aligned Movement has become a platform for developing countries in Africa, Asia, and Latin America. India is a full member of the group, while other BRICS nations such as China and Brazil hold observer status.
The Syrian conflict is one of several topics on Ban's agenda. He is also expected to discuss Tehran’s controversial nuclear program and human rights issues during talks with Iranian leaders.

"Iran's proposal to the meeting of members of the Non-Aligned Movement to solve the Syria issue is to recommend a ceasefire and the implementation of national reconciliation talks in the country," state news agency IRNA quoted deputy Foreign Minister Hossein Amir Abdullahian as saying.

Tehran’s play for support is one of several events expected to take place at the weeklong gathering of leaders from countries that are not considered global powers. The guest list includes Egyptian President Mohammed Morsi.

The NAM summit puts its host country in the spotlight, as Tehran is given the chance to assert itself on a platform it does not receive from western countries like America, which has leveled increasing sanctions and pressure against Iran over its nuclear program.

Tehran is in talks with NAM member-states to find new customers for its crude oil amid western-led sanctions against the country's oil trade.

The Iranian Oil Ministry has planned an exhibition on the sidelines of the summit to display its achievements in the scientific and technological fields, the Tehran Times reported.

Tehran also hopes to discuss the ongoing Syria crisis, promote its narrative for its nuclear program, and ease tension with Middle East rivals in Egypt and the Gulf, the AP said.

“This gives Iran a diplomatic stage and puts them on equal footing with other competing nations, both economically and diplomatically. They’re not afforded this sort of stage in New York…so this is a good opportunity for Iran,” geopolitical analyst Patrick Henningsen told RT.

But Ban's appearance at the summit hasn’t been supported by the US and Israel. Washington and Tel Aviv both called on international government officials and the UN Secretary-General to boycott the gathering.

Dodging the event was likely never an option for Ban – the 120 countries present at the event represent the biggest single voting bloc in the UN General Assembly.
“A sizable chunk if not a majority of the world’s population are citizens of nonaligned nations. It’s not something the UN Secretary-General can easily dismiss,” Karim Sadjadpour, Iranian expert at the Carnegie Endowment for International Peace, told the New York Times
.
Washington is less than supportive of the summit. Besides Iran, the meeting includes a number of other countries that the US has sought to marginalize in the past, including North Korea and Sudan.

Perhaps the most talked-about aspect of the gathering isn't US disapproval, but the highly anticipated arrival of Egyptian President Mohamed Morsi, who is flying in on Thursday for a four-hour visit.

Morsi will be the first Egyptian leader to travel to Tehran since the 1979 Islamic Revolution, when Iran broke ties with Cairo over Egypt’s peace pact with Israel. The Egyptian President's visit is seen as an effort by the leader to redefine his country’s place on the international stage.

Posted by seemorerocks at 09:30