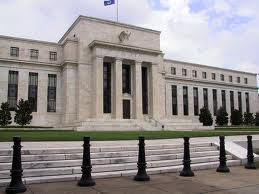 
The Federal Reserve is a wealth transfer machine, skimming wealth from the productive many and transferring it to the parasitic few.

Today I launch a series entitled "The Rot Runs Deep" that examines the moral and financial rot at the core of American finance, politics and culture. We have reached a unique junction of American history: the confluence of Big Lie propaganda, neofeudalism and the worship of false financial gods.

The Big Lie propaganda machine of corporate media and the Central State has perfected Orwell's nightmare vision of centralized media and a fascist centralized State which turn lies into self-serving "truth."

Since the Federal Reserve is once again expected to "save" a crumbling, exploitative Status Quo, let's use the Fed as an example. The propaganda machine would have us believe that the Federal Reserve, the privately owned central bank of the U.S., has "saved" the Status Quo from financial ruin on numerous occasions by "smoothing out" the business cycle (credit expands and contracts) and by "stimulating aggregate demand" by lowering interest rates and pumping money into the economy (quantitative easing).

We are constantly prompted to worship the Federal Reserve's supposedly god-like powers to rescue a corrupt and venal Status Quo from the black hole of recession and collapse, and this Big Lie masks its real nature: The Fed is nothing but a parastic wealth transfer machine, skimming wealth from the many and transferring it to the few.

In effect, the Fed is the "enforcer" of neofeudalism in America: the feudal Lords of Finance control the for-sale political system and skim tribute from the 99.5% toiling in the fields below their castles. The Fed enforces this parasitic transfer of wealth by manipulating interest rates to enrich the banks and provides "free money" to the Financial Lords which is then used to buy assets and lend at interest.

The mechanisms of the Fed's parasitic transfer of wealth are well-known. Here's one: the Fed "loans" money to the Feudal Lords at 0% interest. the Lords then loan this free money out to peasants, students and other debt-serfs at high rates of interest. The interest "earned," courtesy of the parasitic Fed, is theirs to keep.

If they can't find enough debt-serfs who can pay more interest, they can always deposit the free money back at the Fed and earn interest from the Fed itself.

Here's another: the Fed "loans" free money (0% interest) to the Financial Lords, who then buy low-risk long-term U.S. Treasury bonds paying 3%. When the Lords spot a better skimming opportunity, they sell the bonds to the Fed, who buys the bonds from the Lords as part of its "Operation Twist."

Peasants who have arduously saved up capital (cash) earn next to nothing as a result of Fed policy, but the Fed insures Feudal Lords earn a guaranteed return on money they obtained for free. The suppression of interest income to near-zero (a negative return once inflation is factored in) is a massive transfer of wealth from savers to Fed-backed speculator Lords and banks.

As a direct and intentional result of the Fed's quantitative easing, huge sums of "free money" slosh into the "risk-on" stock market, where the money provides liquidity for the Lords' high-frequency trading (HFT) skimming operations.

The losers are the peasants who have been locked into 401K plans that divert their earnings into the stock market, where the Lords' HFT can skim billions from the 401K plans.

The Fed guarantees the Lords free money, and also supports the Financial Lords' speculative bets in the stock market; whenever the market threatens to swoon, the Fed intervenes and manipulates the markets up to levels where the HFT machines will trigger momentum buying.

In a society and culture that has lost its moral compass, a culture of greed, self-serving lies and corrupt vested interests, the word "evil" has lost its power. It has been reduced to a cartoonish label, a cynic's smarmy joke.

The Soviet Empire was evil, and President Reagan was mocked by "sophisticates" for labeling our global competitor evil. In the relativist terms of propaganda, the only difference between the U.S. and the U.S.S.R. were two letters; this is the mindset created by a reliance on propaganda. There is no good or evil, there is only the paycheck "earned" by serving one master or another.

Anyone daring to label the widely worshipped Federal Reserve as a false god, a purveyor and enforcer of predation and exploitation, will also be mocked by presumptive "sophisticates" of the many Cargo Cults that depend on the neofeudal skimming, exploitation and lies for their own share of the spoils. Their self aggrandizement and share of the swag demands obedience to the Fed's godlike power to skim from the many and distribute to the few.

Since they are among the few, they will do anything for their Master, the Federal Reserve, for it has the power they worship: the power to transfer vast wealth from the productive many to the parasitic few.

Should we be surprised that the parasites in the media, academia, politics and finance support the evil that enables their own predation and exploitation? Of course not, for self-service and self-justification are the ultimate American gods.