'Drugs money was the only liquid investment capital available to many banks at height of crisis.’ - Max Keiser

Where the Mob Keeps Its Money 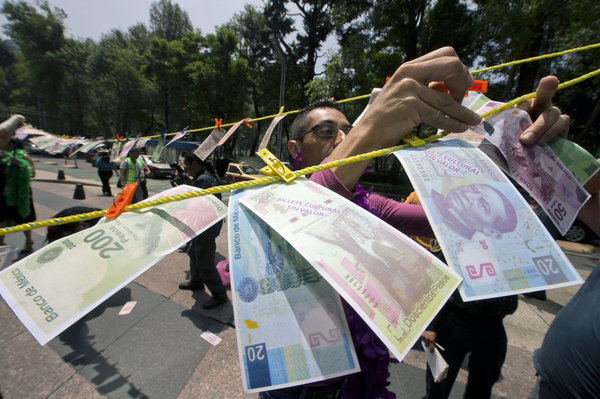 
THE global financial crisis has been a blessing for organized crime. A series of recent scandals have exposed the connection between some of the biggest global banks and the seamy underworld of mobsters, smugglers, drug traffickers and arms dealers. American banks have profited from money laundering by Latin American drug cartels, while the European debt crisis has strengthened the grip of the loan sharks and speculators who control the vast underground economies in countries like Spain and Greece.

Mutually beneficial relationships between bankers and gangsters aren’t new, but what’s remarkable is their reach at the highest levels of global finance. In 2010, Wachovia admitted that it had essentially helped finance the murderous drug war in Mexico by failing to identify and stop illicit transactions. The bank, which was acquired by Wells Fargo during the financial crisis, agreed to pay $160 million in fines and penalties for tolerating the laundering, which occurred between 2004 and 2007.

Last month, Senate investigators found that HSBC had for a decade improperly facilitated transactions by Mexican drug traffickers, Saudi financiers with ties to Al Qaeda and Iranian bankers trying to circumvent United States sanctions. The bank set aside $700 million to cover fines, settlements and other expenses related to the inquiry, and its chief of compliance resigned.

ABN Amro, Barclays, Credit Suisse, Lloyds and ING have reached expensive settlements with regulators after admitting to executing the transactions of clients in disreputable countries like Cuba, Iran, Libya, Myanmar and Sudan.

Many of the illicit transactions preceded the 2008 crisis, but continuing turmoil in the banking industry created an opening for organized crime groups, enabling them to enrich themselves and grow in strength. In 2009, Antonio Maria Costa, an Italian economist who then led the United Nations Office on Drugs and Crime, told the British newspaper The Observer that “in many instances, the money from drugs was the only liquid investment capital” available to some banks at the height of the crisis. “Interbank loans were funded by money that originated from the drugs trade and other illegal activities,” he said. “There were signs that some banks were rescued that way.” The United Nations estimated that $1.6 trillion was laundered globally in 2009, of which about $580 billion was related to drug trafficking and other forms of organized crime.

A study last year by the Colombian economists Alejandro Gaviria and Daniel Mejía concluded that the vast majority of profits from drug trafficking in Colombia were reaped by criminal syndicates in rich countries and laundered by banks in global financial centers like New York and London. They found that bank secrecy and privacy laws in Western countries often impeded transparency and made it easier for criminals to launder their money.

At a Congressional hearing in February, Jennifer Shasky Calvery, a Justice Department official in charge of monitoring money laundering, said that “banks in the U.S. are used to funnel massive amounts of illicit funds.” The laundering, she explained, typically occurs in three stages. First, illicit funds are directly deposited in banks or deposited after being smuggled out of the United States and then back in. Then comes “layering,” the process of separating criminal profits from their origin. Finally comes “integration,” the use of seemingly legitimate transactions to hide ill-gotten gains. Unfortunately, investigators too often focus on the cultivation, production and trafficking of narcotics while missing the bigger, more sophisticated financial activities of crime rings.

Mob financing via banks has ebbed and flowed over the years. In the late 1970s and early 1980s organized crime, which had previously dealt mainly in cash, started working its way into the banking system. This led authorities in Europe and America to take measures to slow international money laundering, prompting a temporary return to cash.

Then the flow reversed again, partly because of the fall of the Soviet Union and the ensuing Russian financial crisis. As early as the mid-1980s, the K.G.B., with help from the Russian mafia, had started hiding Communist Party assets abroad, as the journalist Robert I. Friedman has documented. Perhaps $600 billion had left Russia by the mid-1990s, contributing to the country’s impoverishment. Russian mafia leaders also took advantage of post-Soviet privatization to buy up state property. Then, in 1998, the ruble sharply depreciated, prompting a default on Russia’s public debt.

Although the United States cracked down on terrorist financing after the 9/11 attacks, instability in the financial system, like the Argentine debt default in 2001, continued to give banks an incentive to look the other way. My reporting on the ’Ndrangheta, the powerful criminal syndicate based in Southern Italy, found that much of the money laundering over the last decade simply shifted from America to Europe. The European debt crisis, now three years old, has further emboldened the mob.

IN Greece, as conventional bank lending has gotten tighter, more and more Greeks are relying on usurers. A variety of sources told Reuters last year that the illegal lending business in Greece involved between 5 billion and 10 billion euros each year. The loan-shark business has perhaps quadrupled since 2009 — some of the extortionists charge annualized interest rates starting at 60 percent. In Thessaloniki, the second largest city, the police broke up a criminal ring that was lending money at a weekly interest rate of 5 percent to 15 percent, with punishments for whoever didn’t pay up. According to the Greek Ministry of Finance, much of the illegal loan activity in Greece is connected to gangs from the Balkans and Eastern Europe.

Organized crime also dominates the black market for oil in Greece; perhaps three billion euros (about $3.8 billion) a year of contraband fuel courses through the country. Shipping is Greece’s premier industry, and the price of shipping fuel is set by law at one-third the price of fuel for cars and homes. So traffickers turn shipping fuel into more expensive home and automobile fuel. It is estimated that 20 percent of the gasoline sold in Greece is from the black market. The trafficking not only results in higher prices but also deprives the government of desperately needed revenue.

Greece’s political system is a “parliamentary mafiocracy,” the political expert Panos Kostakos told the energy news agency Oilprice.com earlier this year. “Greece has one of the largest black markets in Europe and the highest corruption levels in Europe,” he said. “There is a sovereign debt that does not mirror the real wealth of the average Greek family. What more evidence do we need to conclude that this is Greek mafia?”

Spain’s crisis, like Greece’s, was prefaced by years of mafia power and money and a lack of effectively enforced rules and regulations. At the moment, Spain is colonized by local criminal groups as well as by Italian, Russian, Colombian and Mexican organizations. Historically, Spain has been a shelter for Italian fugitives, although the situation changed with the enforcement of pan-European arrest warrants. Spanish anti-mafia laws have also improved, but the country continues to offer laundering opportunities, which only increased with the current economic crisis in Europe.

The Spanish real estate boom, which lasted from 1997 to 2007, was a godsend for criminal organizations, which invested dirty money in Iberian construction. Then, when home sales slowed and the building bubble burst, the mafia profited again — by buying up at bargain prices houses that people put on the market or that otherwise would have gone unsold.

In 2006, Spain’s central bank investigated the vast number of 500-euro bills in circulation. Criminal organizations favor these notes because they don’t take up much room; a 45-centimeter safe deposit box can fit up to 10 million euros. In 2010, British currency exchange offices stopped accepting 500-euro bills after discovering that 90 percent of transactions involving them were connected to criminal activities. Yet 500-euro bills still account for 70 percent of the value of all bank notes in Spain.

And in Italy, the mafia can still count on 65 billion euros (about $82 billion) in liquid capital every year. Criminal organizations siphon 100 billion euros from the legal economy, a sum equivalent to 7 percent of G.D.P. — money that ends up in the hands of Mafiosi instead of sustaining the government or law-abiding Italians. “We will defeat the mafia by 2013,” Silvio Berlusconi, then the prime minister, declared in 2009. It was one of many unfulfilled promises. Mario Monti, the current prime minister, has stated that Italy’s dire financial situation is above all a consequence of tax evasion. He has said that even more drastic measures are needed to combat the underground economy generated by the mafia, which is destroying the legal economy.

Today’s mafias are global organizations. They operate everywhere, speak multiple languages, form overseas alliances and joint ventures, and make investments just like any other multinational company. You can’t take on multinational giants locally. Every country needs to do its part, for no country is immune. Organized crime must be hit in its economic engine, which all too often remains untouched because liquid capital is harder to trace and because in times of crisis, many, including the world’s major banks, find it too tempting to resist.

Roberto Saviano is a journalist and the author of the book “Gomorrah.” He has lived under police protection since 2006, when he received death threats from organized crime figures in Italy. This essay was translated by Virginia Jewiss from the Italian.
Posted by seemorerocks at 10:40