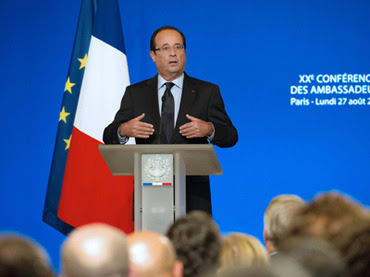 Syria’s opposition remains badly fragmented, and it is far from clear whether such a provisional government could be formed anytime soon. But such a statement is seen by many as added incentive for the formation of government.

The French leader made annoucement during his first address to the country's ambassadors around the world.

Hollande also warned the Syrian government that there could be a direct military intervention.

"With our partners we remain very vigilant regarding preventing the use of chemical weapons, which for the international community would be a legitimate reason for direct intervention."

This announcement comes after US Barack President Obama warned Assad that any use or even movement of the country’s stockpile of chemical weapons would be met by US military intervention.

The French leader also criticized Russia and China, claiming “their attitude weakens our ability to carry out the mandate conferred on us by the UN charter.”

Egypt's president Morsi says time is up for Syria's Assad tells Syrian opposition to form govt, pledges to recognize it
Syrian fighter jet attacks on Damascus suburbs kills at least 60, in what opposition activists say are the first aerial attacks by fighter planes on the Syrian capital. 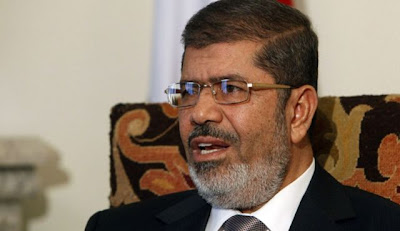 Egypt's new Islamist president, preparing to make his debut on the stage of world diplomacy with an initiative over the Syrian crisis, called on Monday for President Bashar Assad's allies to help lever the Syrian leader out of power.

"Now is the time to stop this bloodshed and for the Syrian people to regain their full rights and for this regime that kills its people to disappear from the scene," Mohammed Morsi said in his first interview with an international news organization.

Morsi, 61, propelled to power by the once banned Muslim Brotherhood, was speaking to Reuters before travelling this week to China and Iran, two countries which, along with Russia, have so far opposed Arab and Western calls to end Assad's rule.

"There is no room to talk about reform, but the discussion is about change," Morsi said, adding Egypt had repeated that "the friends of the Syrian people in China and Russia and other states" need to back ordinary Syrians.

They said the aerial attacks targeted the neighborhood of Zemalka and the more easterly suburb of Saqba where Free Syrian Army fighters had attacked and overrun several army roadblocks earlier in the day.

Both suburbs are poor and predominantly Sunni Muslim. Sunnis have been at the forefront of 17 months of fighting against Assad.

"The 60 casualties were recorded in Zemalka and there were many dead as well in Saqba but their numbers could not be ascertained," said Osama al-Dimashqi, an activist speaking from Zemalka and giving an alias for fear of reprisals.

"Most of those killed were civilians and the Free Syrian Army had attacked the roadblocks then left," he said.

Dimashqi said these were the first aerial attacks by fighter planes on Damascus.