Key: 'China has tentacles around the world'

NZ under this government is a fully-fledged lackey of the United States.
PM says China's increasing influence a reality in Pacific
Prime Minister John Key says it's a reality that China has grown tentacles around the Pacific and the world - but there is not much New Zealand can do about it. 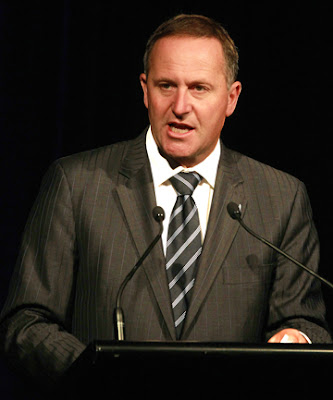 Mr Key was speaking on the opening day of the three-day Pacific Islands Forum in Rarotonga on Tuesday, as confirmation came that US Secretary of State Hillary Clinton would also be attending.

John Key and other Pacific leaders were carried into the opening ceremony on a pa'ata (platform) flanked by Cook Island school children. The leaders' retreat will be held on the island of Autitaki on Thursday.

Hillary Clinton will attend the post-forum dialogue, where countries that are not members of the forum can meet with regional leaders, on Friday before having a lunch meeting with Mr Key.

Mr Key said on Tuesday that Mrs Clinton's attendance is not so much to counter China's increasing influence in the Pacific, but more to demonstrate the United States' long-standing interest in the region.

"I think it's a great example of how they are interested in what's happening here, they're committed to this part of the world.

"We look forward to having an opportunity to sit down with Hillary Clinton on Friday to talk to her about the issues out here in the Pacific, our perspective on those, but also to talk about a wide range of issues from Afghanistan through to Syria."

Mr Key said China's influence is not something New Zealand can stop but, rather, it tries to work alongside countries with big chequebooks to spend on aid.

Hillary Clinton will lead the highest-level US delegation in the forum's history, accompanied by senior officials from the departments of State, Defence, and Interior. Her attendance was confirmed by spokesperson Victoria Nuland.

Ms Nuland said Mrs Clinton would attend the post-forum "as part of our intensive engagement and ongoing collaboration with the Pacific Islands."

Mrs Clinton's attendance comes as part of a wider trip to Indonesia, China, East Timor, Brunei, and Russia. She will lead the US delegation to the APEC Economic Leaders' Meeting in Vladivostok on 8 and 9 September.