Petcoke-Producing BP Refinery Leaks Oil Into Lake Michigan
A BP refinery in Whiting, Indiana leaked an unknown amount of oil into Lake Michigan Monday afternoon, an incident that occurred less than two weeks after the U.S. lifted BP’s ban on seeking new oil leases in the Gulf of Mexico. 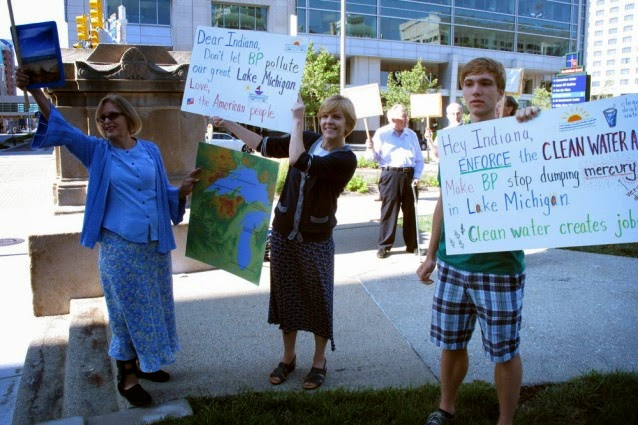 Protesters outside the Indiana Statehouse call on Indiana regulators to require BP to cut its Whiting refinery’s mercury discharges into the lake in August 2013.

BP says the spill, which has since been stopped and contained, was caused by a “disruption in the refining process” at its Whiting refinery in northwest Indiana. Dan Goldblatt, spokesman at the Indiana Department of Environmental Management, told ThinkProgress that his office was notified at about 4:30 CDT Monday of an oil sheen, which EPA officials said on a press call Thursday totaled about 5,000 square yards, on Lake Michigan. Mike Beslow, On-Scene Coordinator for the EPA, said that when he visited the site around 9 p.m. Monday, the sheen was no longer visible. Neither Goldblatt nor EPA officials had information on how much oil had spilled, but CBS, citing unnamed sources, reports that between 10 and 12 barrels — around 500 gallons — spilled into the lake.

Lake Michigan acts as the drinking water source for 7 million people in the Chigago area alone, but EPA officials said on the call that the drinking water wouldn’t be affected by the spill. The EPA, BP and the Coast Guard are leading the cleanup effort, which involves placing booms on the water, scooping up oil, which has been turned hard and waxy by cold weather, with their hands, and cleaning up a nearby beach that was contaminated. BP told Reuters that they have had “no reports of any wildlife impacted,” and EPA officials confirmed this on the call.

The presence of a sheen on a body of water is typically viewed as a violation of the Clean Water Act, and EPA Region 5 Administrator Susan Hedman said during the call that officials would look into whether action should be taken against BP.

“I can assure you that EPA’s lawyers will be looking at this matter and determining whether or not enforcement action will be appropriate,” she said.
The Whiting refinery, which was recently upgraded to process oil from the Canadian tar sands, has drawn the ire of environmentalists in the past, due to its pollution of Lake Michigan. Last September, Indiana regulators ruled that BP must cut the amount of mercury pollution it releases annually into Lake Michigan from the refinery from 23.1 parts per trillion of to 8.75 parts per trillion. The new rule marks a “modest but significant” change, according to the NRDC, but is still above the federal mercury limit of 1.3 parts per trillion.

The Whiting refinery was also at the center of a November lawsuit by Chicago residents, who sued BP, Koch Industries, and other companies over the storage of vast piles of petroleum coke, a byproduct left over from the refining of tar sands oil. The Whiting refinery currently produces about 600,000 tons per year of petcoke, but the recent $3.8 billion expansion has the potential to up its petcoke production to 2.2 million tons per year.

Spokespersons at BP did not immediately respond to ThinkProgress’ request for comment. The spill comes on the heels of a barge collision that spilled up to 170,000 gallons of oil into into Galveston Bay Saturday, and just over a week after a spill of 20,000 gallons of oil was reported in an Ohio nature reserve.
Posted by seemorerocks at 13:29