Precipitation anomalies over South America during the active monsoon season, September 2012 – May 2013 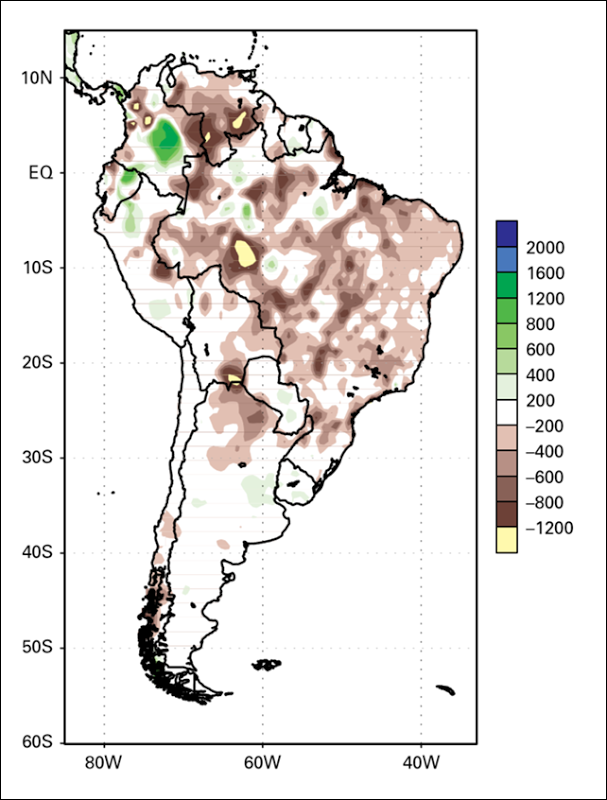 Geneva, 24 March 2014 (WMO) – Temperatures in South America were dominated by hot conditions in most parts of the continent, except for some limited areas in southern Brazil and the north-central and western parts of South America, which had near to colder than average temperatures. A warm October–December period – including the hottest December on record – contributed to the second warmest year in Argentina since records began in 1961, behind only the record warmth of 2012. In December, the most significant heatwave since 1987 struck central and northern Argentina.

North-eastern Brazil experienced its worst drought in 50 years. This followed the 2001–2010 decade, when large parts of the Amazon Basin saw prolonged drought. The Brazilian Plateau, which is the core monsoon region in South America, experienced its largest rainfall deficit since records began in 1979; damages exceeded US$ 8 billion.

On 2 April, La Plata, Argentina, received about 300 mm of rainfall in just three hours. The torrential downpour led to flash floods that resulted in more than 50 fatalities, making this one of the worst weather disasters in the history of Argentina. Many states in Brazil also had extremely heavy rainfall during December, with at least seven cities setting new precipitation records. In south-eastern Brazil, the city of Aimores received


http://www.desdemonadespair.net/2014/03/graph-of-day-precipitation-anomalies.html
Posted by seemorerocks at 22:17