salmon are migrating to the

Salmon in California wanting to get downstream to the ocean have one major problem: a drought has dried up their river. But a fleet of lorries is coming to their rescue 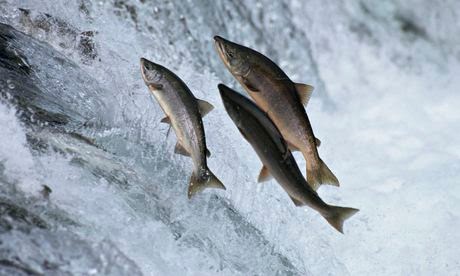 Given the choice between swimming down a cool river to the Pacific Ocean or being jolted along in a truck, most sea creatures would choose the former.
Unfortunately, the worst drought for 40 years has left the River Sacramento so low that 30m 3in-long juvenile salmon can no longer perform their natural migration and must be transported in relays of trucks 200 miles towards the ocean.

This is not the first example of a human-assisted migration, but it is one of our more self-interested endeavours. The salmon trucking operation is being organised by the California Fish and Wildlife Service, aided by fisheries businesses, who hope that carrying the juveniles from a hatchery towards the ocean will boost salmon stocks – and their $1.4bn industry – in two years' time, when the fish seek to make the return journey up river.

Freedom of movement for many animals has long been curtailed by human developments but we also go to great lengths to reinstate certain favoured species' liberty to roam. Fish ladders have been installed at weirs to enable salmon to more easily head upriver and modern motorways often include tunnels and culverts for reptiles, otters and badgers, as well as overhead bat bridges, which have been criticised for their cost but have been shown to work for small numbers of lucky individuals.

These are modest examples of creating "wildlife corridors", an increasingly popular conservation concept in which fragmented habitats are linked together so animals and plants now confined to isolated nature reserves can more easily move around and so become less vulnerable to extinction.

An ability to move is increasingly important in an era of climate change, as rapidly changing conditions threaten species with extinction.

Perhaps the most extreme example of "assisted colonisation" – deliberately moving a species to a new area where they will better survive in the future – is the suggestion that polar bears could be relocated from the melting Arctic ice to the Antarctic (where they might swiftly devour every penguin). Closer to home, the swallowtail butterfly is currently only found on the Norfolk Broads and could become extinct if the freshwater Broads are inundated with salt water from rising seas. Suitable habitat in the Cambridgeshire fens is too far for the butterfly to find by itself, so if it is to survive, humans may have to move it.

It is controversial, but there is likely to be more moving of plants and animals in the future as some academics argue it will help save species and enhance and repair ecosystems. Migrating salmon by truck, however, is a vivid example of the danger of intervening in complex natural processes. Denied the learning experience of a trip downstream, the maturing salmon are less likely to find their way back up the Sacramento to the waters of their parents.
Posted by seemorerocks at 14:39