Galveston Bay Spill Will Take Economic, Ecological Toll
With no end in sight to containing a spill that may have dumped 150,000 gallons of fuel oil into Galveston Bay on Saturday, the hit to Texas’ economy and environment is already huge — and sure to grow. 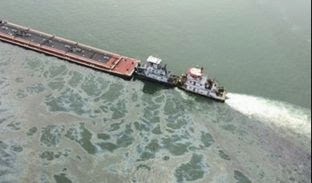 The 50-mile Houston Ship Channel, one of the world’s biggest waterways for the transport of petroleum products, chemicals and other materials, remains shut down. Cruise ships can’t depart from key ports. Galveston Bay’s multibillion-dollar recreational and commercial fishing industry is off limits during a peak tourist season. And the scores of vulnerable species in Galveston Bay, most notably birds that are soon to begin their northward migration along the upper Texas coast, are at grave risk.
The type of oil that spilled — a marine fuel oil known as RMG 380 — is black, sticky and particularly heavy. That means that instead of evaporating from the surface of the water like gasoline would, much of it will sink, persisting in the environment for months or even years. While this heavier oil is not acutely toxic, it can smother wildlife, to devastating effect.
“Fuel oil is not easy to clean off anything,” said Jim Suydam, a spokesman for the General Land Office, the state agency that is leading the response and cleanup efforts in conjunction with the U.S. Coast Guard. “It sticks to things.”
Coast Guard Lt. Kristopher Kidd said Sunday that it still isn’t clear how much oil spilled into the bay when a 585-foot bulk carrier collided with an oil barge on Saturday. The barge was holding close to 1 million gallons of oil, but Kidd said only one tank with a capacity of 168,000 gallons was affected. That tank “didn’t completely empty,” he said, but a substantial portion of it probably did. The oil barge has been removed, but there is no easy way to contain the spill, and efforts have been further hampered by strong winds.

The most recent oil spill of a comparable size off the coast of Texas occurred in 2010, when close to a half-million gallons of oil ended up in the Port Arthur Ship Channel. The waterway was closed for several days, a big blow to oil refineries and other operations in the port. (The 2010 BP oil spill, while far larger in scope, had less effect on the bay, Suydam said — though Texas beaches took a bigger hit, and some are still recovering.)
Even though more oil was involved in the 2010 Port Arthur incident than Saturday's spill, experts say the current situation in Galveston Bay will create much bigger problems. The Port Arthur spill was confined to that ship channel; this one occurred in open water.
Scott Hickman, who has been chartering boats in Galveston Bay for decades, said slicks are clearly visible from shore, and the smell of oil is strong. His boat-chartering business is poised to lose thousands of dollars a day, he said — during spring break no less — because operations are shut down as containment efforts continue.
“This is really, really the worst stuff you can dump in the water," he said.
Suydam added that Galveston Bay is an ecologically sensitive area, which was far less true of the Sabine-Neches waterway where the Port Arthur spill occurred. Migratory birds such as the loon will begin their northward flight this month and are sure to be affected by the sticky oil slicks. In their case, Suydam said, even a few barrels of oil could have had a major impact.
Galveston Bay and its environs are also home to thousands of other species of shorebirds that will get coated when they dive for fish. Tom Harvey, a spokesman for the Texas Parks and Wildlife Department, said birds covered in sticky black oil have already been recovered in Galveston's East Beach area, which faces the ship channel.
The economic impact of this spill is also likely to exceed that of the 2010 spill. The Houston Ship Channel is a significant financial engine and a large reason Texas is the top exporting state in the nation; its exports now exceed New York City's. The state’s ongoing oil and gas boom has boosted the channel's importance even more, with refineries along it working furiously to process crude oil so it can be shipped elsewhere.
Suydam said the spill has "already had an economic impact as far as industrial activities." But he expressed optimism about the cleanup operation, saying Texas is in a good position to respond to the spill.
"We’ve got the most robust response capacity in the United States," he said.