Russia agrees to return some military arms, equipment to Ukraine
Russia's foreign ministry on Friday alleged that ethnic minorities in Ukraine are living in fear after the ouster of the country's president and the coming to power of interim authorities that include right-wing nationalists. 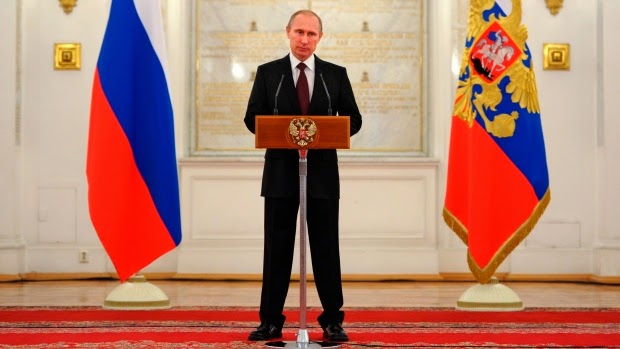 
The statement by the ministry was in line with Russia's frequent contention that Ukraine's large ethnic Russian community faces repression under the new government that Moscow characterizes as fascist.

The ministry statement raises the stakes on the issue, saying that ethnic Germans, Hungarians and Czechs in Ukraine also feel themselves in peril.

"They are unsettled by the unstable political situation in the country and are seriously afraid for their lives," the statement said, without citing specific incidents.

Russia has brought large numbers of troops to areas near the Ukrainian border and speculation is strong that Moscow could use protection of ethnic Russians as a pretext for a military incursion.

Tensions between Ukraine's ethnic Russians and Ukrainian-speakers continue to plague the country in the wake of the ouster of President Viktor Yanukovych, who fled to Russia in February after months of protests against him.

The Crimea region, where ethnic Russians are a majority, voted this month to secede from Ukraine and Russia has formally annexed the Black Sea peninsula, a move that Western countries have denounced as illegitimate. Talk percolates of similar referenda in other regions with large Russian populations, although none has been scheduled.

Yanukovych on Friday issued a statement calling for an "all-Ukrainian referendum" to determine the status of Ukraine's regions, according to Russian news reports. The reports did not specify if he envisioned referenda in each region or a national vote, nor did he say what actually should be voted on.

Proposals have been floated by Russia and some politicians to federalize Ukraine -- giving the regions more autonomy. The interim authorities reject such a move.

Also Friday, Russia's president said Ukraine could regain some arms and equipment of military units in Crimea that did not switch their loyalty to Russia.

Putin also approved Shoigu's proposal to turn over arms and equipment of the units still loyal to Ukraine, the reports said. No specifics were given on quantities, types of hardware or timing