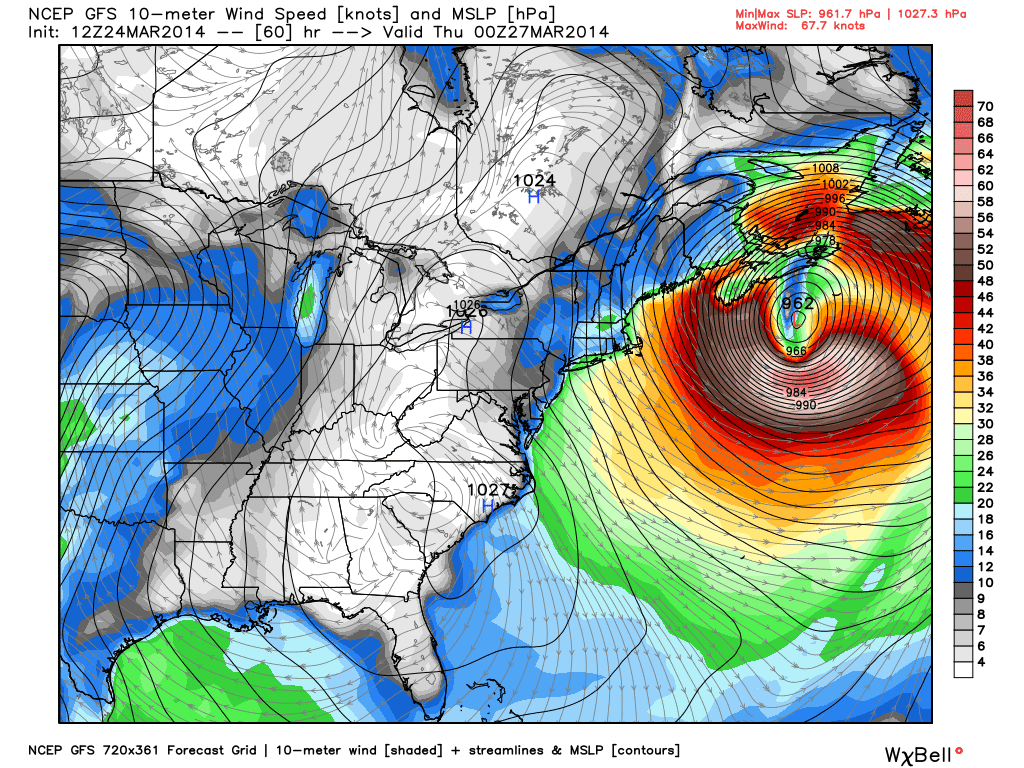 A modest storm that will bring some light rain and snow to the Mid-Atlantic will transform into the most intense cyclone off the East Coast since Superstorm Sandy. Between Tuesday and Wednesday afternoon, the storm is forecast to strengthen explosively or undergo what meteorologists call “bombogenesis.”

Blizzard watches have been hoisted for eastern Massachusetts, which is forecast to receive over 6 inches of snow and 50 mph winds.  Areas farther west, from New York City to Boston, may just experience a glancing blow but a small shift in the storm track back towards the coast would raise the specter of more significant impacts. 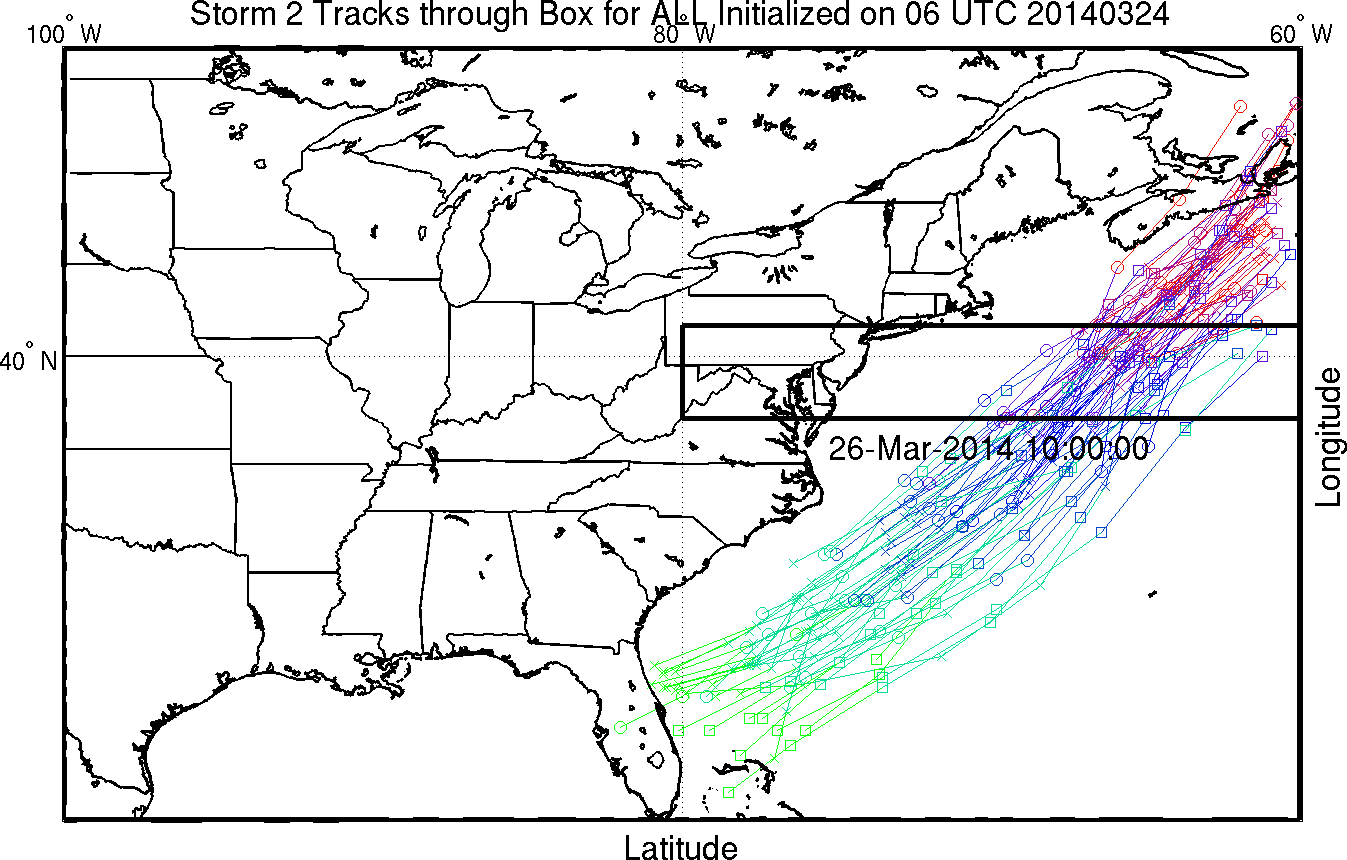 Storm track forecasts from different simulations of the Canadian and GFS (GEFS) model ensembles. (Stony Brook)
An astonishing rate of strengthening
Computer models have consistently forecast this storm to intensify at an exceptional rate.  Meteorologists consider a drop in pressure of 24 millibars in 24 hours “rapid intensification.”  Some models have predicted this storm’s pressure will drop up to 50 millibars in 12-24 hours.
A general consensus is that the storm’s minimum central pressure will plummet from around 1,000 millibars Tuesday to 950-960 millibars Wednesday.  Bear in mind, a pressure of 950 millibars is equivalent to what we see in category 3 hurricanes and not far off the minimum pressure of Superstorm Sandy (940 mb) at peak intensity. 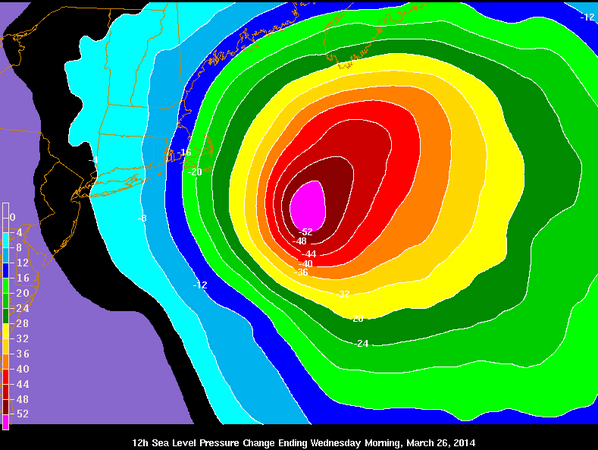 Latest 12km NAM forecasting 12h pressure falls of more than 52mb between Tues. night and Wed. morning! #Bombogenesis
How is this happening? 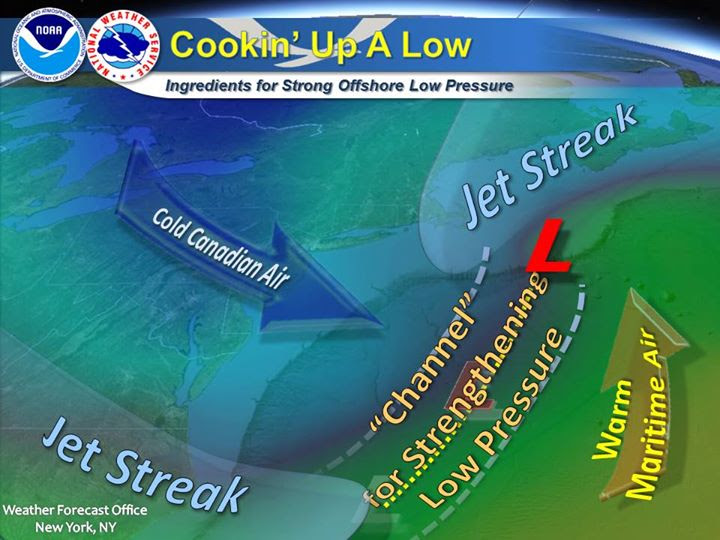 The National Weather Service office serving New York City posted a nice, concise explainer – complemented by an excellent graphic (above) – on why this storm is set to intensify so quickly.  In short, the storm explosively develops due to the collision of cold Canadian air with warm, moist air from the south – in a region of rising air and strong high altitude winds:

To promote the rapid strengthening (or deepening) of surface low pressure, we need air to rise up from the ground. How does that happen? Well, one way is thanks to zones of stronger wind, called “jet streaks,” many thousands of feet above the ground. If positioned correctly, they create a relative void of air aloft, forcing air from below to rise and fill it back up (think of it as the atmosphere’s vacuum). This helps low pressure form closer to the ground.

Another important ingredient is a strong change (or gradient) in temperature across the developing low pressure. As the low “spins up,” it can pump warmer air to its north and east, and pull in colder air from the west and down to the south. This makes the gradient even stronger, which energizes the overall system even more. The whole process feeds into itself and causes rapid strengthening of the low pressure

A general rule for this storm is that the farther east you are, the closer you’ll be to the storm center and the more severe conditions will be.  The National Weather Service currently forecasts the worst conditions in eastern Massachusetts, including Cape Cod and Nantucket – where the Blizzard Watches are in effect.
Writes the National Weather Service forecast office serving Boston:

CONFIDENCE IS RELATIVELY HIGH FOR HIGH IMPACT OVER THE CAPE AND ISLANDS AND FOR RELATIVELY LOW IMPACT ACROSS SOUTHWEST NEW HAMPSHIRE…NORTHWEST CONNECTICUT AND MASSACHUSETTS NORTH AND WEST OF WORCESTER. CONFIDENCE IS CONSIDERABLY LESS IN THE GRADIENT REGION IN BETWEEN.

Areas under the blizzard watch could see in excess of 6 inches of snow and wind gusts to 55 mph. 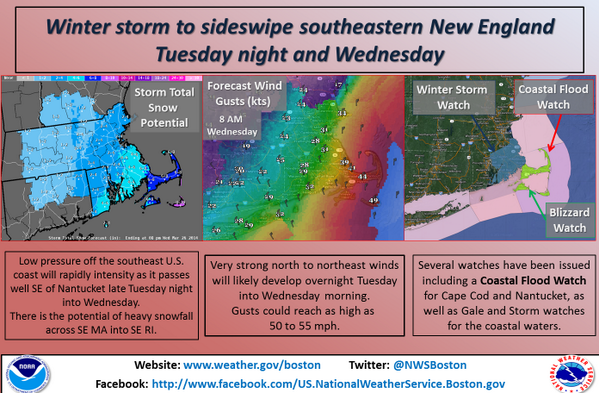 Here are the details about the winter storm potential late Tuesday night into Wednesday:
A storm surge of 1 to 2 feet also poses the risk of coastal flooding. 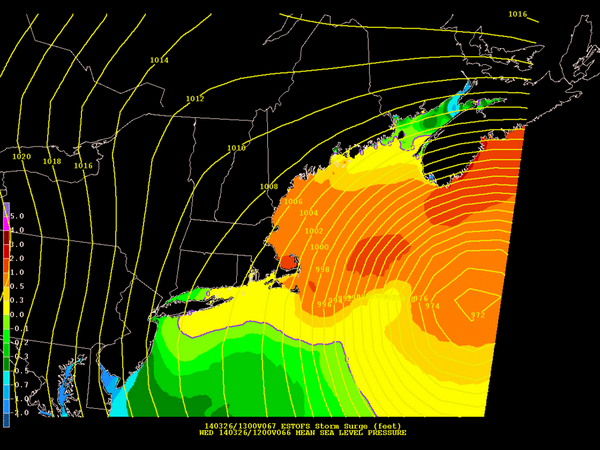 #ESTOFS surge guidance w/ values of 1 to 2 ft above normal water levels in Gulf of Maine for Wed in strong NE flow.

Farther south, the National Weather Service office serving New York City conveys a similar message to the Boston office, stressing its easternmost areas – such as Long Island – are most likely to be affected by disruptive snow and wind. Some computer models suggest significant snow (of at least a couple inches) could reach New York City, others do not – as the National Weather Service explains:

[THE FIRST CAMP] SPELLS A POTENTIALLY SIGNIFICANT IMPACT FOR EASTERN ZONES. THE SECOND CAMP … SUGGESTS THAT THE TRI-STATE [NY/PA/NJ] WILL RECEIVE AT MOST A GLANCING BLOW…AND THERE IS SOME CHANCE THAT AREAS NW OF NYC COULD EXPERIENCE LITTLE IF NO IMPACT. 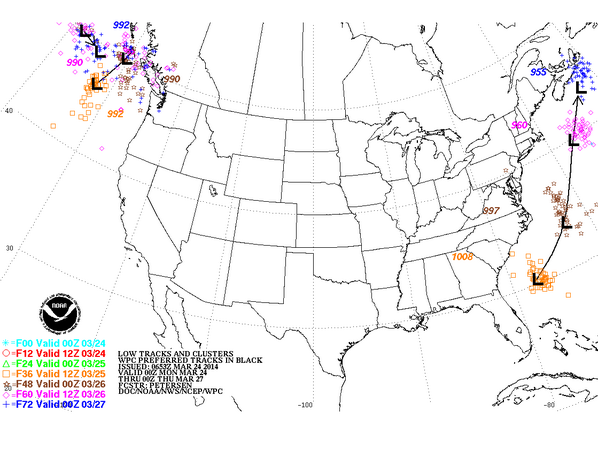 Here is another update of that graphic I showed previously of storm track and model output.
2 RETWEETS 2 FAVORITES

The Canadian Maritimes – directly in the storm’s path –  are likely to be ground-zero for this storm.  A foot or more of snow is forecast in many areas (although somewhat less may fall in some coastal areas where rain mixes in), along with wind gusts to 75 mph, around hurricane-force.  Power outages are expected along with coastal flooding.

Plan for near complete travel shutdown Wednesday across the Maritimes. We can take a good punch, but this is a haymaker #atlstorm
The storm is likely to generate incredible offshore winds of up to 75-85 mph (sustained) and waves to 40-50 feet according to some models. 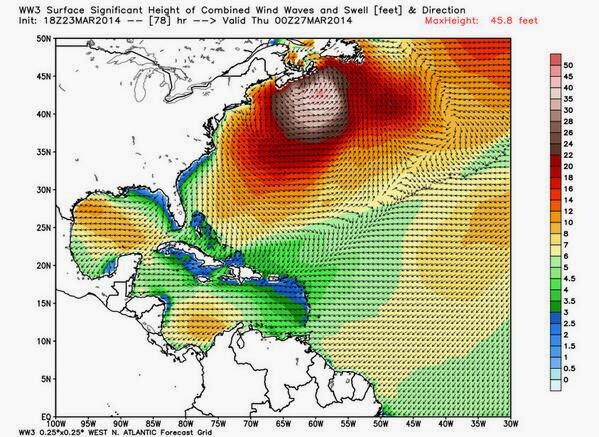 Wave heights could approach 50 feet plus with this weeks Nor'easter. http://fplus.me/6dQ1

Interested in what this storm (in its tamer phase) will mean for D.C.? Stay tuned for a detailed update between 1 and 2 p.m. …