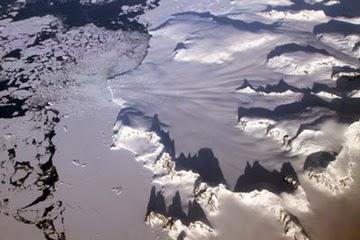 If you think of climate change as a hazard for some far-off polar bears years from now, you're mistaken. That's the message from top climate scientists gathering in Japan this week to assess the impact of global warming.

In fact, they will say, the dangers of a warming Earth are immediate and very human.

"The polar bear is us," says Patricia Romero Lankao of the federally financed National Center for Atmospheric Research in Boulder, Colo., referring to the first species to be listed as threatened by global warming due to melting sea ice.

She will be among the more than 60 scientists in Japan to finish writing a massive and authoritative report on the impacts of global warming. With representatives from about 100 governments at this week's meeting of the Intergovernmental Panel on Climate Change, they'll wrap up a summary that tells world leaders how bad the problem is.

The key message from leaked drafts and interviews with the authors and other scientists: The big risks and overall effects of global warming are far more immediate and local than scientists once thought. It's not just about melting ice, threatened animals and plants. It's about the human problems of hunger, disease, drought, flooding, refugees and war, becoming worse.

The report says scientists have already observed many changes from warming, such as an increase in heat waves in North America, Europe, Africa and Asia. Severe floods, such as the one that displaced 90,000 people in Mozambique in 2008, are now more common in Africa and Australia. Europe and North America are getting more intense downpours that can be damaging. Melting ice in the Arctic is not only affecting the polar bear, but already changing the culture and livelihoods of indigenous people in northern Canada.

This report finds "It's not far-off in the future and it's not exotic creatures — it's us and now," says Mann, who didn't work on this latest report.

The United Nations established the climate change panel in 1988 and its work is done by three groups. One looks at the science behind global warming. The group meeting in Japan beginning Tuesday studies its impacts. And a third looks at ways to slow warming.

Its reports have reiterated what nearly every major scientific organization has said: The burning of coal, oil and gas is producing an increasing amount of heat-trapping greenhouse gases, such as carbon dioxide. Those gases change Earth's climate, bringing warmer temperatures and more extreme weather, and the problem is worsening.

The panel won the Nobel Peace Prize in 2007, months after it issued its last report.

Since then, the impact group has been reviewing the latest research and writing 30 chapters on warming's effects and regional impacts. Those chapters haven't been officially released but were posted on a skeptical website.

The key message can be summed up in one word that the overall report uses more than 5,000 times: risk.

"Climate change really is a challenge in managing risks," says the report's chief author, Chris Field of the Carnegie Institution of Science in California. "It's very clear that we are not prepared for the kind of events we're seeing."

Already the effects of global warming are "widespread and consequential," says one part of the larger report, noting that science has compiled more evidence and done much more research since the last report in 2007.

— VIOLENCE: For the first time, the panel is emphasizing the nuanced link between conflict and warming temperatures. Participating scientists say warming won't cause wars, but it will add a destabilizing factor that will make existing threats worse.

— FOOD: Global food prices will rise between 3 and 84 percent by 2050 because of warmer temperatures and changes in rain patterns. Hotspots of hunger may emerge in cities.

— WATER: About one-third of the world's population will see groundwater supplies drop by more than 10 percent by 2080, when compared with 1980 levels. For every degree of warming, more of the world will have significantly less water available.

— HEALTH: Major increases in health problems are likely, with more illnesses and injury from heat waves and fires and more food and water-borne diseases. But the report also notes that warming's effects on health is relatively small compared with other problems, like poverty.

— WEALTH: Many of the poor will get poorer. Economic growth and poverty reduction will slow down. If temperatures rise high enough, the world's overall income may start to go down, by as much as 2 percent, but that's difficult to forecast.

According to the report, risks from warming-related extreme weather, now at a moderate level, are likely to get worse with just a bit more warming. While it doesn't say climate change caused the events, the report cites droughts in northern Mexico and the south-central United States, and hurricanes such as 2012's Sandy, as illustrations of how vulnerable people are to weather extremes. It does say the deadly European heat wave in 2003 was made more likely because of global warming.

Texas Tech University climate scientist Katharine Hayhoe, who was not part of this report team, says the important nuance is how climate change interacts with other human problems: "It's interacting and exacerbating problems we already have today."

University of Colorado science policy professor Roger Pielke Jr., a past critic of the panel's impact reports, said after reading the draft summary, "it's a lot of important work ... They made vast improvements to the quality of their assessments."

Another critic, University of Alabama Huntsville professor John Christy, accepts man-made global warming but thinks its risks are overblown when compared with something like poverty. Climate change is not among the developing world's main problems, he says.

But other scientists say Christy is misguided. Earlier this month, the world's largest scientific organization, the American Association for the Advancement of Science, published a new fact sheet on global warming.

It said: "Climate change is already happening. More heat waves, greater sea level rise and other changes with consequences for human health, natural ecosystems and agriculture are already occurring in the United States and worldwide. These problems are very likely to become worse over the next 10 to 20 years and beyond."

Texas Tech's Hayhoe says scientists in the past may have created the impression that the main reason to care about climate change was its impact on the environment.

"We care about it because it's going to affect nearly every aspect of human life on this planet," she says. 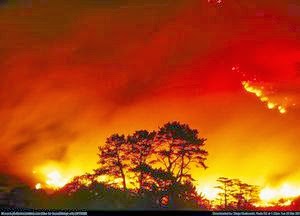 The Intergovernmental Panel on Climate Change says New Zealand faces an increased risk of fire, particularly in the north and east of the country.
The Fire Service says research over the past 40 years has shown a growing risk of fire.
National rural fire officer Murray Dudfield said changes to the landscape and land cover are a factor.
He said wilding trees, which have seeded naturally by wind, are spreading in some areas, including the high country around Marlborough, Canterbury and Otago.
They have the potential to increase if there are no controls put on them.
And changes through the retirement of grazing land in the high country are also having an impact.
Mr Dudfield said there isn't as much high country "burn off" as there used to be 20 or 30 years ago, meaning there's a risk of increased fuel loadings.
But Mr Dudfield said the service has strategies in place to manage these changes.
These include heightened public awareness during periods of elevated fire danger and a fire weather monitoring system that allows it to assess the danger daily.
Mr Dudfield said while parts of the country - like the central North Island - are getting drier, he doubts New Zealand wildfires will become like Australia's.
In Australia, fires get into the eucaluptus forest and there is poor access to those fires, so it takes a long time to contain it once they have escaped.
But in New Zealand there's good road access to plantations and other areas, enabling the service to put more energy into first response and ensure any fires are kept to a smallish size.
Mr Dudfield said they are comfortable with the resources that forest owners, the Department of Conservation, local government and the Fire Service have to manage any wildfire that may occur.


The Fire Service also has agreements with its counterparts in Australia, Canada and the United States to call on if needed.
Posted by seemorerocks at 13:42