100 unaccounted for in Washington mudslide 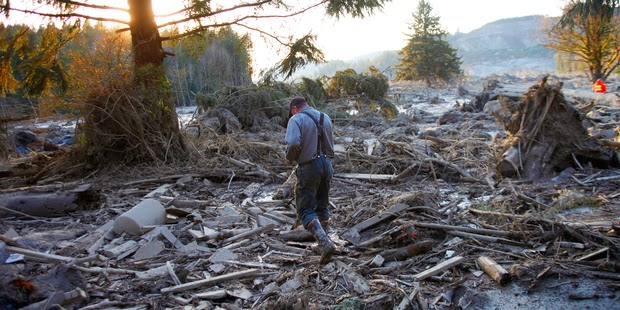 The search for survivors of a deadly Washington state mudslide has grown to include scores of people who were still unaccounted for as the death toll from the wall of trees, rocks and debris that swept through a rural community rose to at least 14.

In struggle to find loved ones, family members and neighbours used chain saws and their bare hands to dig through wreckage that was tangled by the mud into broken piles.

Authorities said they were looking for more than 100 people who had not been heard from since the disaster about 88.5 kilometres northeast of Seattle. They predicted that the number of missing would decline as more people are found safe. But the startling initial length of the list added to the anxieties two days after a 1.6km-wide layer of soft earth crashed onto a cluster of homes at the bottom of a river valley.

"The situation is very grim," Snohomish County Fire District 21 Chief Travis Hots said, stressing that authorities are still in rescue mode and are holding out hope. But he noted: "We have not found anyone alive on this pile since Saturday."
Snohomish County sheriff's spokeswoman Shari Ireton said Monday afternoon (Tuesday NZT) search and rescue crews discovered an additional six bodies, bringing the number fatalities to at least 14.
About 30 houses were destroyed, and the debris blocked a 1.6km-long stretch of state highway near Arlington.

The Stillaguamish River is shown backed up after it was blocked on by the massive mudslide. Photo / AP

Cory Kuntz and several volunteers worked with chain saws to cut through the roof of his uncle's house, which was swept about 150 yards from its previous location. Kuntz said his aunt, Linda McPherson, was killed. He and the others pulled out files, his aunt's wallet and a box filled with pictures and slides.
"When you look at it, you just kind of go in shock, and you kind of go numb," he said, adding that there were more people out helping Sunday. On Monday, they couldn't get through roadblocks.
"They are all eager to get down here, but unfortunately they can't. It just shows how tight this community is," he said.
Doug Reuwsaat, who grew up in the area and was also helping in the search, said authorities had told people to stay away.
"We're related to a lot of these people from around here. So that's why we're here," he said.
The mudslide struck Saturday morning, a time when most people are at home. Of the 49 structures in the neighbourhood, authorities believe at least 25 were full-time residences.
An overnight search of the debris field turned up no other bodies, Hots said. Monday's search was to include aircraft, dogs and heavy equipment.
Frustrations were growing as family members and neighbours waited for official word on the missing and the dead. Elaine Young and her neighbours uncovered several bodies Sunday and had to contact authorities to get them removed.
They also found a chocolate Labrador named Buddy alive, and helped pull the dog from the rubble, leading her to wonder if other survivors could be out there, desperate for help.
"If we found a dog alive yesterday afternoon that we cut out of a part of a house, doesn't that seem that maybe somebody could be stuck up under part of a house and be alive too?" asked Young, whose home survived the slide but was on the edge of the devastation.
Authorities believe Saturday's slide was caused by recent heavy rains that made the terrain unstable.
From the beginning, rescue crews on the ground have faced dangerous and unpredictable conditions as they navigated quicksand-like mud that was 4.5m deep in some places. Some who went in got caught up to their armpits in the thick, sticky sludge.
The threat of potential flash floods or another landslide also loomed over rescuers. On Monday, some crews had to pull back because of concern that a hillside could shift.
Retired firefighter Gail Moffett, who lives in Oso, said she knows about 25 people who are missing, including entire families with young children.
"It's safe to say I'll know everyone affected or who they are," Moffett said. "There's so much pain going on in the community right now."
Among the injured were a mother and her baby. Amanda Skorjanc, 25, was in satisfactory condition at Harborview Medical Center in Seattle, spokeswoman Susan Gregg said. Her son, 22-week-old Duke Suddarth, remained in critical condition and was improving, Gregg said. Three other men were in serious condition.
Snohomish County Emergency Management Director John Pennington said the list of 108 names included construction workers who were working in the area and people just driving by. But, he cautioned, that does not necessarily mean there are dozens of additional fatalities. Three other patients remained in serious condition.
"It's a soft 108," Pennington said, explaining that the number would almost certainly fall as people are slowly located.
The spirits of search-and-rescue teams were raised late Saturday when they heard cries for help from the flotsam of trees, dirt and shattered wood. But no one else has been found alive.
The slide blocked the North Fork of the Stillaguamish River, which is continuing to back up, officials said. Authorities said Monday at least seven homes are now flooded, and more flooding is expected.
Frequent, heavy rain and steep geography make the area prone to landslides. Less than a decade ago, another slide hit in the same general area.
Washington Gov. Jay Inslee described the scene as "a square mile of total devastation" after flying over the disaster area Sunday. He assured families that everything was being done to find their missing loved ones. Inslee said Monday that he had received assurances that the Federal Emergency Management Agency would help.
Barbara Welsh went to Monday's news briefing in Arlington to get more information. She said she has not seen her husband, William Welsh, since Saturday, when he went to help someone in Oso with a water tank.
Bruce Blacker, who lives just west of the slide, doesn't know the whereabouts of six neighbours.
"It's a very close-knit community," Blacker said as he waited at an Arlington roadblock before troopers let him through.