The revolution eats its own


I agree with the conclusion of Neil Clarke, that this is a very dangerous development.

This is (and I have checked on their internal seach engine) the first mention of Muzychko or of far-Right presence in the interim government.

Special forces shot dead a far-right Ukrainian leader early on Tuesday in an incident which is likely to raise tensions between Kiev's new interim government and restive ultra-nationalist groups.

Oleksander Muzychko – known as Sashko Bily, or Sasha the White – was killed in a shootout in the western city of Rivne, Ukraine's interior ministry said. Police tried to arrest him in a cafe when he opened fire on them, they added. 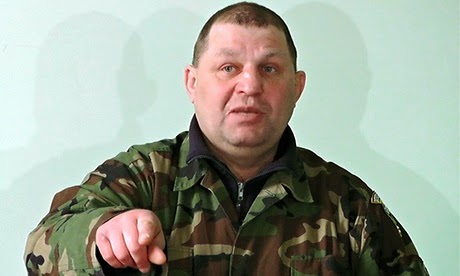 Muzychko was a prominent member of Praviy Sektor, a far-right paramilitary outfit which took part in the Maidan uprising against the then president, Viktor Yanukovych. The group has no role in government, although its leader Dmytro Yarosh has announced he intends to stand in May's presidential election. His volunteers occupy several buildings in the capital. Russia points to Praviy Sektor as evidence that Yanukovych's overthrow last month was a "fascist coup".

On Tuesday Yarosh demanded that Ukraine's interior minister, Arsen Avakov, resign over the killing. Avakov, however, refused. Unrepentant, he said his ministry would take tough measures against any "armed bandits" – whatever their political orientation – if they threatened public order.

The episode highlights the fragility of the new opposition-led coalition, which has so far failed to persuade militia groups to disarm. Though marginal, Praviy Sektor could become a growing headache for the authorities, especially if its activists refuse to leave the Maidan, and the downtown hotel where they are camping out. 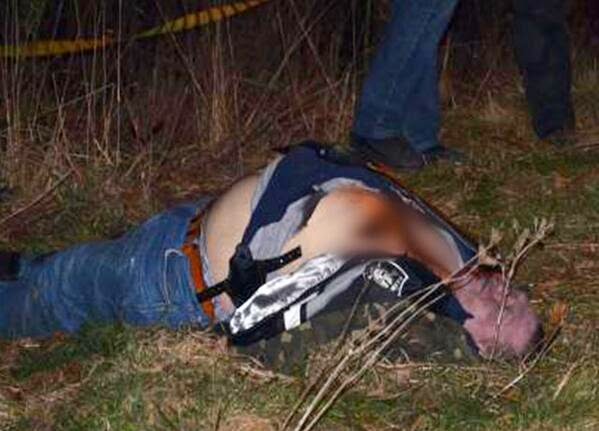 The killing came as Ukraine's parliament, the Rada, accepted the resignation of the defence minister, Ihor Tenyukh, as thousands of Ukrainian troops began to evacuate from Kremlin-controlled Crimea. Tenyukh rejected criticism that he had failed to give clear orders to soldiers trapped in their bases for up to three weeks. But he agreed to step down. Deputies appointed Col Gen Mykhailo Koval as his replacement.

According to Tenyukh, about 6,500 Ukrainian soldiers and their family members are leaving Crimea – about a third of the 18,000-strong Ukrainian military force based there. The other two-thirds plus dependents had opted to stay on the peninsula, which the Russian Federation annexed last week. "4,300 servicemen and 2,200 family members who wish to continue serving in Ukraine's armed forces will be evacuated," Tenyukh said.

Officials in Kiev, meanwhile, described the meeting on Monday between Russia's foreign minister, Sergei Lavrov, and his Ukrainian counterpart, Andriy Deshchytsia, in The Hague as "a positive move". It was the first direct contact between both sides since Russian troops seized Crimea last month. They agreed some confidence-building measures. Following a blackout over the weekend, Deshchytsia promised that Kiev would not cut off Crimea's electricity and water supply. Lavrov said Russia was not preparing a further military incursion into southern and eastern Ukraine.

Speaking on Tuesday, however, Ukraine's deputy foreign minister Danylo Lubkivksy said there could be no "normalisation" of relations while Russia continued to occupy Ukrainian territory. He said: "People in the Crimea are beaten and tortured. Russian militants abduct people. They seize Ukrainian property." He also said large numbers of Russian troops were still poised on Ukraine's eastern border.

Russia, meanwhile, indicated that it would continue its uncompromising stance towards the government in Kiev, which it views as illegitimate. Dmitry Peskov, Vladimir Putin's press spokesman, said Moscow was likely to raise the price Kiev has to pay for gas. Ukraine was no longer entitled to a discount since Russia's Black Sea fleet, based in Crimea, was not on Ukrainian territory, Peskov argued. Ukraine had failed to settle its debts to Gazprom, the Russian state energy giant, he added.

According to Ukraine's authorities, Muzychko was the leader of a criminal gang. The first deputy interior minister Volodymyr Yevdokimov said officers of the "Sokol" special unit had killed him as he tried to escape. "At the moment of arrest, at shouts of 'Stop! Police,' Muzychko fled, jumping through a window, and opened fire," Yevdokimov said. "He was still alive as they were arresting him – but then the paramedics who arrived at the scene found that he had died," he said. Three other gang members were detained, he added.

Muzychko's associates, however, dispute the official version of what happened. One said that special forces shot him in the leg and then shot him again as he tried to flee through a window. Another, the independent lawmaker Oleksander Doniy, claimed on his Facebook page that the ultra-nationalist leader had been executed. "He was then thrown out of the vehicle, with his hands cuffed behind his back, and with two gunshot wounds to his heart."

It is clear that the thug-like Muzychko had become an embarrassing liability for the authorities in Kiev. Last month he stormed into the office of the local Rivne prosecutor. He then slapped and humiliated a hapless official, shouting abuse and yanking the unfortunate man's tie. RT, the Kremlin propaganda channel, broadcast the video. In another recent YouTube address Muzychko acknowledged that the authorities might try to kill him, signing off: "Glory to Ukraine."

Russia issued an international warrant for Muzychko's arrest earlier this month. Moscow claims that Muzychko fought alongside separatist Chechen rebels during the first Chechen war in the mid-1990s, and was guilty of the murder and torture of several Russian soldiers.

'Kiev leaders took power with Right Sector's help, but now afraid of them'

Notorious Ukrainian right-wing militant leader Aleksandr Muzychko, also known as Sashko Bilyi, has been shot dead during a police raid against his gang, confirmed Ukraine's Ministry of Interior. Neil Clark, a UK-based journalist and broadcaster who's been covering the events in Ukraine extensivley, explained why allegations that the Right Sector activist was assassinated make perfect sense

It's not only the Right Sector. There are real fascists in the govenment 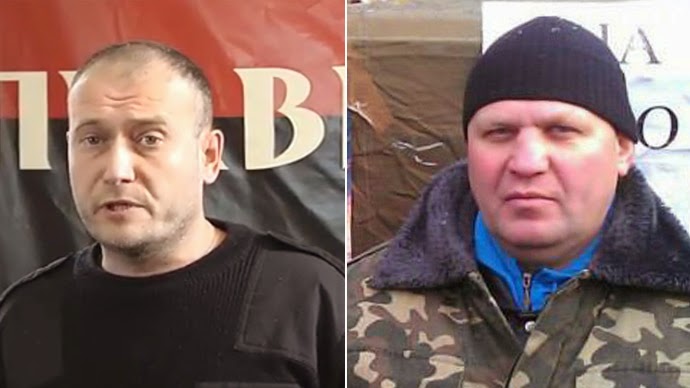 "We cannot watch silently as the Interior Ministry works to undermine the revolution," Interfax reported Yarosh as saying. “We demand the immediate resignation of the Interior Minister Arsen Avakov, and the arrest of the commander of the Sokol Special Forces and those guilty of [Muzychko’s] murder."

Right Sector leaders threatened Avakov with revenge, though they did not specify exactly what they would do.

“We will take revenge on Arsen Avakov for the death of our brother,” said Roman Koval, the Right Sector organizer in Rovno, charivne.info news portal reported.

Koval claimed that the operation to kill Muzychko was ordered personally by Avakov, the acting Interior Minister.

Yarosh backed the claim, adding that the party views Muzychko’s killing as an assassination. The Right Sector leader said that the party understands that “many want to destabilize the situation in Ukraine,” but added that the nationalists “call for peace” and are doing everything in their power to prevent conflicts.

Muzychko is, however, known for stunts that are far from peaceful.


Following the coup in Kiev, the far-right militant refused to give up the weapons which he occasionally used to intimidate government officials in the city of Rovno, in western Ukraine. He threatened local authorities with an AK-47 and made openly anti-Semitic statements on videos which were then posted on YouTube.
Ukraine filed charges of hooliganism and obstructing law enforcement agencies against Muzychko on March 8. Four days later he was put on the Ukrainian police’s wanted list.

Avakov said in a reply to Right Sector that he accepts the far-right group’s challenge, adding that his stance toward lawbreakers will be harsh.
"If some gangsters threaten the minister, I accept this challenge and I am ready to accept any challenge, because that's my job,” Avakov said in a statement. “Henceforth my policy will be very harsh toward bandits, toward those who take up arms to violate order."

By “bandits,” Avakov said he was referring to people who loot enterprises or homes and possess unregistered guns.

Earlier, Russia put both Muzychnko and Yarosh on the international wanted list for allegedly torturing and murdering at least 20 captured Russian soldiers during the first Chechen War in 1994-1995.

On March 16, Yarosh threatened to sabotage Russian pipelines on the Ukrainian territory.

Yarosh has headed the ultra-right Stepan Bandera All-Ukrainian Organization Trizub since 2005. During the Maidan protests, the organization became the basis for the Right Sector movement.
On Saturday, the movement announced it would become a political party. In a statement it slammed the current authorities in Kiev and demanded early parliamentary elections, nominating Yarosh for president.

Right Sector members were very active in the violence which triggered the ouster of President Viktor Yanukovich. The group’s fighters used clubs, petrol bombs and firearms against Ukrainian police and have been wearing Nazi insignia Training in hand combat among opposition fighters from the nationalist organization "Right sector" in a camp on Independence Square in Kiev. (RIA Novosti/Andrey Stenin)


“The current government in Kiev came to power with the help of the Right Sector. They wouldn’t have got the power without the Right Sector. It was the force that was torching government buildings, using the violence to get them into power. Now they’ve become an embarrassment to them. I think there are two reasons why this has happened.

“First of all the new authorities in Kiev want to get the Right Sector into government security operator organizations – they want them to join the National Guard, they want them to lay down their weapons , because they are frightened that they will be an alternative force in the country, which could threaten them in time. I think that the second reason is the PR angle. They are an embarrassment to the new government in Ukraine, which is being sold as a wonderfully progressive, democratic government,” he said.