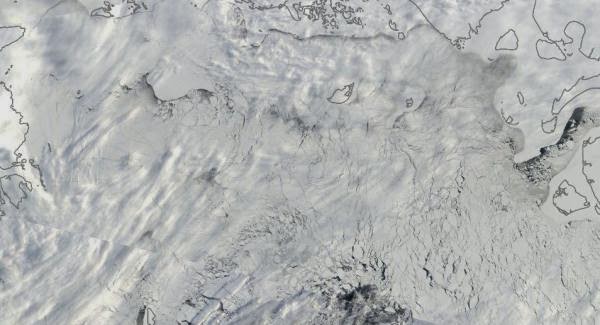 The Siberian Heat Wave that began last week continues apace today. Far warmer than normal southerly winds continue to blow over a large region of Siberia bringing with them near freezing and occasionally above freezing temperatures. The combined influence of this off-shore flow and, what is for the Arctic, late spring and early summer-like weather is having a profound effect on Arctic sea ice in the regions of the Kara, Laptev, and East Siberian Seas.

Last week, we reported that an early break-up of sea ice was ongoing in the Kara Sea. Now, with the warm, off-shore flow shifting west, this break-up zone has expanded well into the Laptev and East Siberian. Satellite observations indicate that a very large section of ice pack, stretching from Severnaya Zemlya past the New Siberian Islands and on into the East Siberian Sea has been shoved northward by the strong south-north wind flow. The result is large gaps, ranging from 50-100 miles in width, forming along the boundary of the land fast ice and spreading through a zone of high impact for about 2,000 kilometers through the Kara and Laptev Seas before extending along a less involved fault zone another 1,000 kilometers into the East Siberian Sea.

Moving from west to east around the Arctic Basin, below is a summary of the ongoing break-up. Please note that some sections of these images are obscured by cloud cover: 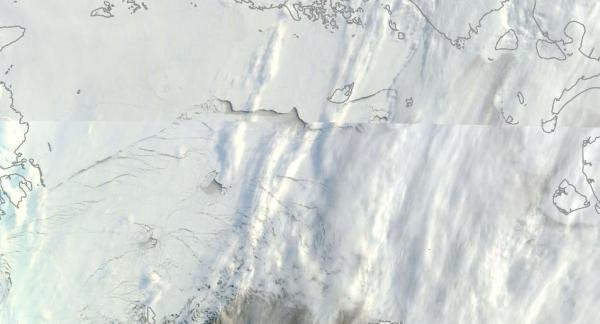 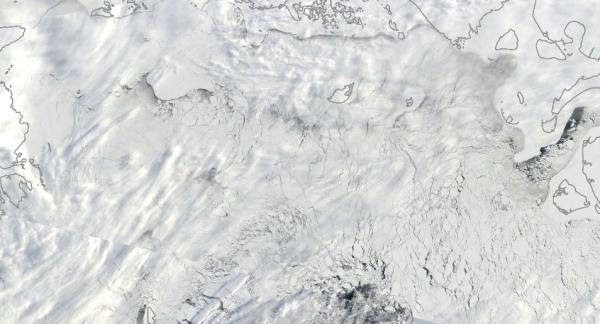 (Kara sea before large scale breakup on March 9 in the top frame and after large-scale break up on March 24 in the lower frame. Image source: Lance-Modis)

Above, we have a continuation of the Kara Sea ice breakup we reported last week. Note that the break-up now extends all the way through sections of the land-fast ice to shore. Motion of the floe is still mostly south to north with sections of open water here ranging from 5-30 kilometers in width.
Moving east, we find that the eastward drift of the off-shore wind pattern and associated warm air temperatures that are closer to May and June norms have had a dramatic impact on Laptev sea ice as well: 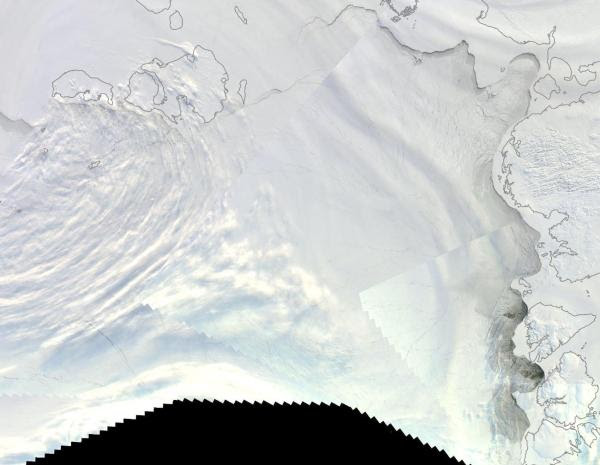 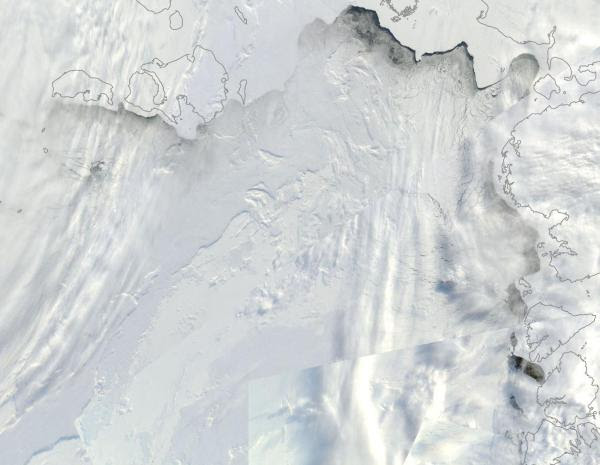 (Laptev sea ice on March 9 with some large polynas prior to large scale break-up and extending of polynas on March 24. Image source: Lance-Modis)

Here we find the section of large openings and polynas spreading east from Severnaya Zemlya through the Laptev and on past the New Siberian Islands. Ice crack sizes are quite large with gaps stretching between 30-50 kilometers in width. Sea ice toward the central pack shows much more extensive cracks (leads) and breakage.
Still further east, the warm southerly winds have also widened and extended large cracks running through the East Siberian Sea, the region of water covering the shallow and sensitive East Siberian Arctic Shelf zone: 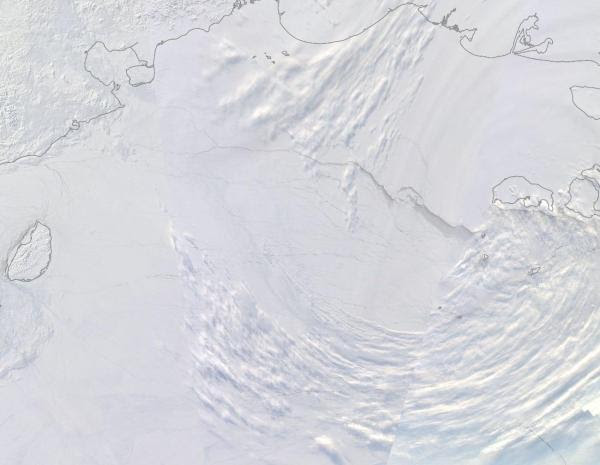 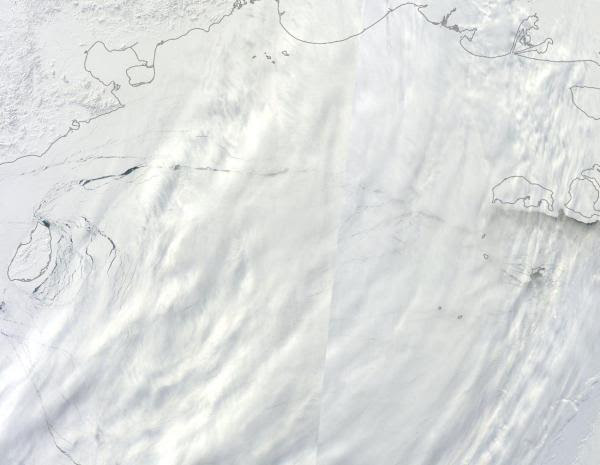 (East Siberian Sea ice on March 9 in the top frame and March 24 in the bottom frame. Image source: Lance-Modis.)

The crack structure appears to have shifted north, extended and widened even as the ice system became more crack-riddled.
Siberian Heat Wave Continues

Temperatures in the region continue to range between 5 and 20 or more degrees Celsius (9 to 36 F) above average for this time of year. This abnormal ‘heat’ translates into average temperatures ranging from -14 to 0 C (8 to 32 Fahrenheit). It is worth noting that salt water freezes at around -2 C (28 F, depending on salinity). So average temperatures in this range are enough to retard refreeze after breakage, to keep sea ice more disassociated and brittle, and to result in some areas where sporadic melt occurs.
As spring continues, warmer water beneath the ice pack, waters warmed by solar insolation, ice warmed by solar insolation, and warm water outflows from the Continents may well become involved to enhance early season sea ice break up and melt.
Overall, the Arctic is now experiencing an extraordinarily high temperature anomaly of +4.21 above the 1979-2000 average or about 5.7 C above the 1880s average. These excessive above average temperatures are high enough to initiate early melt, fragility and break-up in some zones (as observed above). 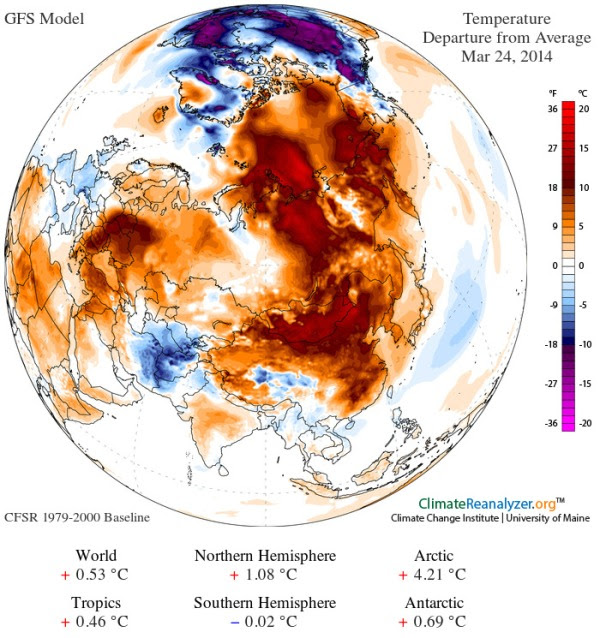 This particular heat wave is in association with a very large Asian system in which much warmer than average temperatures extend south to north from Northern China, Mongolia, through the Yakutia region of Russia and on up into the Kara, Laptev, East Siberian, and Beaufort Seas of the Arctic Ocean. It is also worth noting the rather impressive hot pool forming over the Balkan States of Eastern Europe and the Ukraine which is, perhaps, a pattern settling in with the potentially oncoming El Nino.
GFS model runs show the current Arctic pulse spiking to around +5 C above 1979 to 2000 averages over the next 48 hours and then slowly fading through March 31 as anomalies return to a range of about +2-3 C above average. Hot zones continue to linger over China, Mongolia, Siberia and Eastern Europe as a somewhat troubling heat pulse develops over a large swath of western Greenland before riding up over Svalbard potentially bringing 30-40 degree (F) temperatures to both Western Greenland and this Arctic island by late in the forecast period.
Links:
Lance-Modis
University of Maine
Arctic Ice Graphs