(A monster Kelvin wave, possibly more powerful than the 1997-98 event, is now rushing toward the surface of the Eastern Pacific. Image source: NOAA/ESRL.)

We are observing an extraordinarily powerful Kelvin Wave, one that was likely intensified by factors related to human global warming, traveling across the Pacific. It appears to be an epic event in the making. One that may be hotter and stronger than even the record-shattering 1997-98 El Nino. What this means is that we may well be staring down the throat of a global warming riled monster.
*   *    *    *    *
Ever since the early 2000s very strong east to west trade winds have been blowing across the Pacific. By around 2010, the force of this wind pattern had risen to never before seen records. Over the years, these record winds piled very warm waters in a region of the world east of the Philippines and Australia. As the pool grew warmer, evaporation increased and salinity levels in the hot water pool spiked. Increasing salinity in the zone resulted in a down-welling current that transferred heat into the ocean’s depths.
By 2013, this hot water pool had grown into a vast abyss of heat. Cyclones forming over this zone experienced a kick in intensity as the typical upwelling force of their winds only dredged more hot water from the ocean deeps. It was a pattern that is contrary to typical tropical storm dynamics in which cooler waters drawn up by intense storms tend to limit their peak strength. Not so with mega-typhoon Haiyan, the strongest storm ever to strike land. The cyclonic wind pattern only dredged more heat from the extraordinarily deep hot water. And so the storm only grew stronger and stronger, knowing little in the way of limits before it barreled into an already storm-battered Philippines.

After Haiyan’s passage, the heat pool remained, only growing deeper and more intense, waiting for a change in the wind. And by January of 2014, that wind change was already well on its way.
In Deep, Hot Water

Like an enormous bag waiting to burst eastward, the hot water pool contained temperatures of 29-30 degrees C or hotter and sagged deep, extending up to 150 meters below the ocean surface. A vast stretch of explosive heat that had been held in check from an equatorial surge only by the strongest trade winds on record. But by January, those trade winds had faded. The east-west flow first weakened, then it fluttered, then it died, allowing the wind direction to reverse. 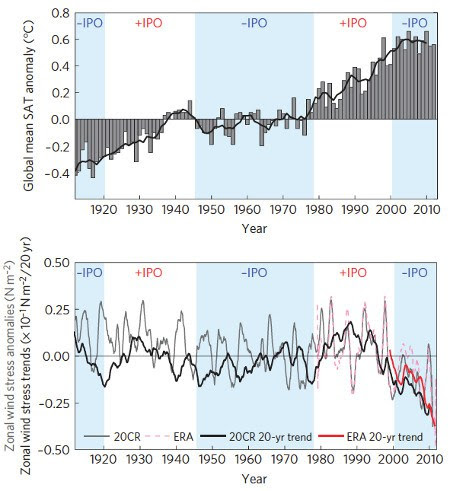 This trade wind reversal has, since January, been facilitated by a string of explosive low pressure systems that developed in the vicinity of the Western Pacific both south and north of the equator. Northern hemisphere storms circulate in a counter-clockwise fashion while southern hemisphere storms circulate clockwise. When the storms line up, they kick storm winds out along the equator, providing strong reversals to the trade winds and further shoving our hot, monster Kelvin Wave to the east.
And as the trade winds fell and reversed due to this sporadic assault of countervailing storms, the hot, deep pool of water surged eastwards. To those on the surface, the motion was invisible. And but for a series of floats spread throughout the Pacific, we would never know a monster thing was rushing along toward the east at a depth of about 150 meters below.
But the floats did their work and by late February it looked like a rather strong heat pulse was on its way across the Pacific Ocean. Risks began to dramatically increase that the heat would breach the surface of the Eastern Equatorial Pacific and set in place the globe-altering weather pattern called El Nino. In a world where human warming was already having serious impacts, the emergence of a new, potentially strong El Nino was not at all a welcome sign. For one, it meant new global high temperature records were likely to soon follow.
It also meant that world food security may well be about to receive yet one more staggering blow.
First Warnings

As the signal for a new El Nino began to appear in the models during late February,NOAA started to issue watches and predictions. Initial estimates were for a 52% chance of El Nino by late 2014.

These warnings caused a ripple of concern through the global food markets. Already reeling under the insults of a series of severe, climate change induced, droughts from Brazil and Argentina, to California and Texas, to the Middle East, to China, the world’s growers were hardly prepared for another series of anomalous weather events. Russia rolling into bread-basket Ukraine further set anxieties alight. But the threat of even a moderate El Nino and its associated droughts and extreme weather seemed to be a rising perfect storm for what was already a terrible year.

Growers in Southeast Asia chided forecasters in the West, with some cautioning that El Nino trackers do their best to quiet down so as not to induce a panic.

Southeast Asia often experiences an interruption of the annual monsoon in association with El Nino. So the region, which was already suffering from ground water shortages, lowering glacial outflows and sporadic periods of intense drought — all conditions related to growth, over-consumption and climate change — could ill afford yet one more strike against it.
Still, the strike appeared to be gathering heat and steam.
A Rising Monster Pushing the Tip of Its Nose up in the
Eastern Pacific

As growers and states with marginal or bad food security grew more anxious, the hot water surge intensified. Researchers independent of NOAA began to issue estimates for a 60, 70 even 80% probability for the emergence of El Nino. Others, tracking what now appeared to be the hottest Kelvin wave ever seen, began to issue warnings that a monster event may well be on the way.

At issue were deep ocean temperature anomalies that were now rushing across the Pacific and beginning to rise toward the surface. The zone in late February that had indicated temperature anomalies in the range of +4-6 C was over an area of approximately 48 degrees of longitude. By March 19, the hot zone of 4-6 C above normal temperatures had expanded to cover about 62 degrees of longitude, and contained a hotter 5-6 C anomaly zone that was now larger than the 4-6 C zone from late February. The deep, hot water pool in the Western Pacific was now beginning to set up a kind of bridge in which it could transfer east, dump its heat into the atmosphere and disrupt global weather. Perhaps, somewhat more disturbing, it was linking to a deep pool of warmer water off the coast of South America (also see animation at the top of this post).

By comparison, the monster El Nino of 1997 featured a Kelvin Wave covering about the same area but whose high temperature anomalies only peaked out at about 4.5 C above average. So the current Kelvin wave is of approximately the same size but, based on current observations, appears to contain more heat.

The Kelvin wave had also begun to tilt up in the front with its ‘nose’ just starting to break the Pacific Ocean surface at between 120 and 100 West Longitude. This put the tip of the rising heat spike almost due south of Baja California and almost due west of the Peru and Ecuador border as of yesterday, March 23.

(Monster El Nino pokes the tip of its nose through Pacific surface waters between 120 W longitude and 100 W longitude along the equator. Image source: NOAA/ESRL.)

In the above ocean temperature anomaly measure for March 23, 2014, we can see a hot pool in the range of 1 to 2 C above average beginning to emerge between 120 and 100 West Longitude. It is a heat pulse that has eliminated all but the closest near-shore cool upwelling along the west coast of South America.

Should the rest of the Kelvin wave follow, temperature anomalies in this region will spike well above 4 C and possibly has high as 5-6 C. Such an event would be even stronger than the one seen in 1997-98, drive global temperatures about .05 to .2 C hotter than previous records in a single year, and set off a series of extreme weather that, when combined with the already severe conditions set in place by human-caused warming, may well be far in excess of those seen during past events.