Anger, Disbelief as Obama Defends US Invasion of Iraq

'In order to not appear hypocritical, Obama rewrites history around Iraq War while denouncing Russia' 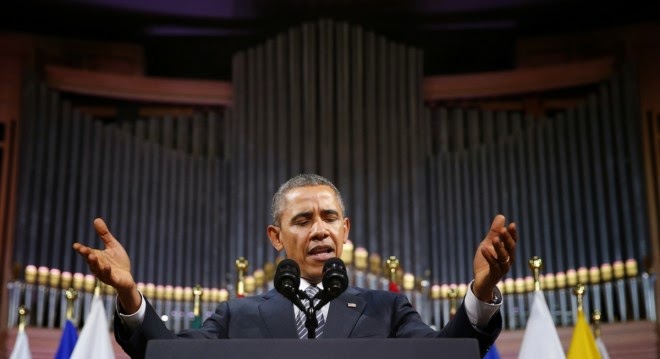 President Obama is on the receiving end of scorn for remarks made during a high-profile speech in Brussels on Wednesday in which he defended the U.S. invasion of Iraq in an attempt to chastise Russia for recent developments in Crimea and Ukraine.

Speaking to the international community about the ongoing crisis in Ukraine and fending off repeated accusations that the U.S. has lost its moral authority given the invasion of Iraq and other breaches of international law in recent years, Obama said:

Russia has pointed to America’s decision to go into Iraq as an example of Western hypocrisy. Now, it is true that the Iraq war was a subject of vigorous debate, not just around the world but in the United States, as well. I participated in that debate, and I opposed our military intervention there.

But even in Iraq, America sought to work within the international system. We did not claim or annex Iraq’s territory. We did not grab its resources for our own gain. Instead, we ended our war and left Iraq to its people in a fully sovereign Iraqi state that can make decisions about its own future.


But instead of tamping down accusations of hypocrisy, Obama inflamed it.
Responding to the speech on FireDogLake, DSWright shot back: "Worked within the international system? So if Russia had gone to the UN to get a resolution, failed, then annexed Crimea it would have been OK?"


Reaction on Twitter was swift—and among those with a seemingly better memory of the devastation caused by the U.S. invasion of Iraq than the president—fierce:

Ross Caputi and Matt Howard, members of the Iraq Veterans Against the War, spoke withCommon Dreams by phone and said that President Obama's argument was both weak factually and morally. As it happens, both IVAW members were together in Washington, DC on Wednesday, organizing an evening event focused on the devastating impacts of the Iraq War—both for veterans like themselves and the Iraqi civilian population—when they heard news about what the president had said.

"What President Obama said is false," said Caputi. "The U.S. did not attempt to work within the international system. We acted unilaterally, without the approval of the UN Security Council."
Howard said the president's narrative on the events that led up to the Iraq invasion, inside or outside the context of Ukraine, was simply "not grounded in reality."
"We went from one lie, which was weapons of mass destruction, to another lie which was liberation and freedom," said Howard. Citing the devastation cited by Iraqi civil society allies, especially women in the country, he continued, "This idea that Iraq is somehow better off or that the U.S. waged a so-called 'Good War' is ridiculous."
In addition, argued Caputi, the U.S. did make very real and successful attempts to gain access to Iraqi resources, namely through the writing of the new Iraqi Constitution and aspects of the so-called "Bremer Orders," referring to Paul Bremer who was the U.S.-appointed Administrator of the Coalition Provisional Authority of Iraq during the aftermath of the 2003 invasion. Those efforts "privatived Iraq's formally nationalized energy resources," paving the way for foreign oil companies, including those from U.S., to gain coveted access to Iraq oil and gas fields.
The Huffington Post's Ryan Grim also made note of this false assertion by Obama regarding Iraqi "resources," writing:

In fact, the U.S. forced Iraq to privatize its oil industry, which had previously been under the control of the state, and further required that it accept foreign ownership of the industry. The effort to transfer the resources to the control of multinational, largely U.S.-based oil companies has been hampered in part by the decade of violence unleashed by the invasion.

Obama's assertion also hinges on how broadly one construes the word "our." Taxpayers on the one hand are worse off, as the wars in Afghanistan and Iraq have added $2 trillion to the national debt, according to one study. But contractors reaped tremendous gains, and Halliburton -- a company often associated with the invasion, of which former Vice President Dick Cheney served as CEO -- saw its stock price surge from under $10 a share to over $50, before falling along with the rest of the market in 2008. (It has since recovered.)

Watch the president's full speech:
Posted by seemorerocks at 12:58