Also NOT included in mainstream western media coverage. "Who cares a f..k" about the Ukrainian people 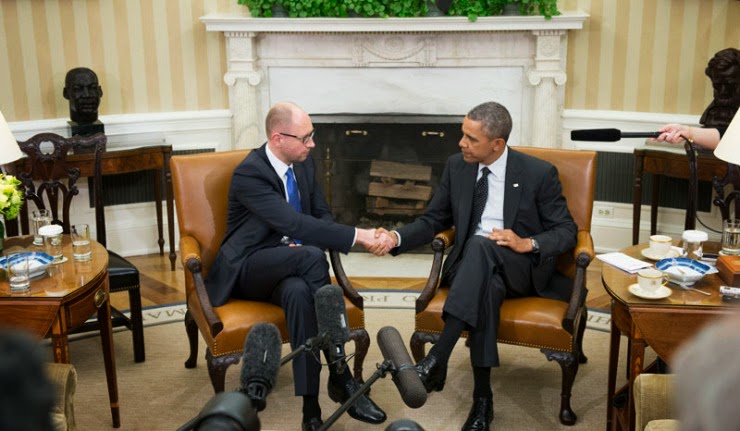 In a TV address to his divided nation, Ukraine's PM Yatsenyuk stunned the people by first suggesting heating prices would rise gradually, then confirming a plan that will see prices rise 100% in the next 2 years (and almost 200% by 2017) as the cost of imported Russian gas is expected to be around $500 (up from the current $84). This standard of living crushing move was then followed by tougher capital controls, restricting cash purchases to around $1300 per person per day after the Central bank basically admitted"amid a tense situation in money markets" it was broke. And all of this comes on the heels of what can only be described as a vague pro-forma comment by US and EU governments over the riots by the "Right Sector" ultranationalists that clearly did not want to upset the state-sponsored thugs too much.

Yatsenyuk addressed the nation in a TV appearance:
So a 182% increase by 2017
And then, via The Ukraine Central Bank, they implement tougher capital controls:
After admitting they are broke...


Taking into account the preservation of the tense situation in the money market, the Decree ? 172 introduced some additional stabilization measures, such as:

Given the increased demand for foreign currencies set the maximum amount of sales of the same individual, which is equivalent to not exceed 15 000 for other operating (working) day in the same banking institution; imposed certain restrictions on transfers of foreign currency by individuals outside of Ukraine for current non-commercial operations.

Such operations are allowed to an amount not exceeding the equivalent of 150 000 per month. However, these restrictions do not apply to a number of important social and transfers, namely to cover the costs of medical treatment abroad, transporting patients, transfers carried out in case of change of the state of residence relating to the payment of non- residents of Ukraine and some others. Residents allowed to repay loans

And then, following last night's riots where the alledgely US sponsored ultranationalists who ousted Yanukoych turned on their new masters,

And this rather vague response from a joint EU/US statement:


The U.S. Embassy in Kyiv and the Delegation of the European Union to Ukraine condemn the incident that took place at the Verkhovna Rada on the night of March 27.

This is a difficult moment in Ukraine’s history, which requires consolidation of all reform efforts, while embracing mutual respect and eschewing violence. Lasting reform in Ukraine will be a long and complex process. To be credible, it must remain democratic, transparent, and peaceful and be pursued exclusively in coordination with the nation’s democratic institutions. As in the past, we call on all sides to refrain from violence and to stick to legal methods for expressing their views and concerns and to avoid any actions which may destabilize the situation.

We welcome the statements of Pravy Sector’s leadership that they intend to keep their actions “within the framework of the law”. We urge all political forces to distance themselves from extremists, who undermine the efforts to stabilize Ukraine and to protect its sovereignty.

We urge the Ukrainian Government to ensure that those who broke the law are held accountable. We stand by previous assertions that any death which occurs in unclear circumstances should be investigated impartially in order to provide citizens the feeling of security and accountability of law enforcement organs. We welcome the establishment of the special parliamentary commission which will scrutinize all evidence on the events involving the police and resulting losses.

During this process, the United States and European Union remain committed to standing with the Ukrainian people to help them build the prosperous, democratic future they deserve.

So to summarize... the government has a plan that dramatically raises living costs for Ukrainians (ensuring that various internation factions will need to lend them more money in bailout terms)... while restructing what the Ukrainian people can spend... promising fair elections in May as the EU and US barely flutter an eyelid at the riots that occurred against the new government... and all of this as Putin gathers increasing amounts of military might on the borders...