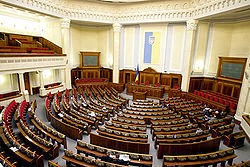 The US Senate is more than happy to hand over a few billion and confirm sanctions:

But, it seems the IMF's requirements for Ukraine's bailout are too much for the locals to bear:
Lawmakers will continue to work on the bill as it seems they approve the top-line budget but not the taxes required to get there... beggars can be choosers again maybe?


The Senate voted overwhelmingly on Thursday to approve a billion-dollar aid package for Ukraine, two days after Senate Democrats relented to Republican demands that they drop a provision backed by the White House that would have authorized an overhaul of the International Monetary Fund.

The vote was 98 to 2. The House is expected to pass a similar bill later in the day. President Obama has said he will sign the bill, which includes new sanctions against Russians and Ukrainians who provided support to Russia to annex the Crimea region of Ukraine.

“This bill is a first step toward supporting the Ukrainians and our Central and Eastern European partners, and imposing truly significant costs on Moscow,” the House majority leader, Eric Cantor, said in a floor speech as his chamber considered its bill.


Ukraine says 'No" to IMF (for now); Via Bloomberg,

We suspect beggars will be choosers once again.

Confused at what that means? Nomura  (h/t @Pawelmorski) has the answer.. kinda... 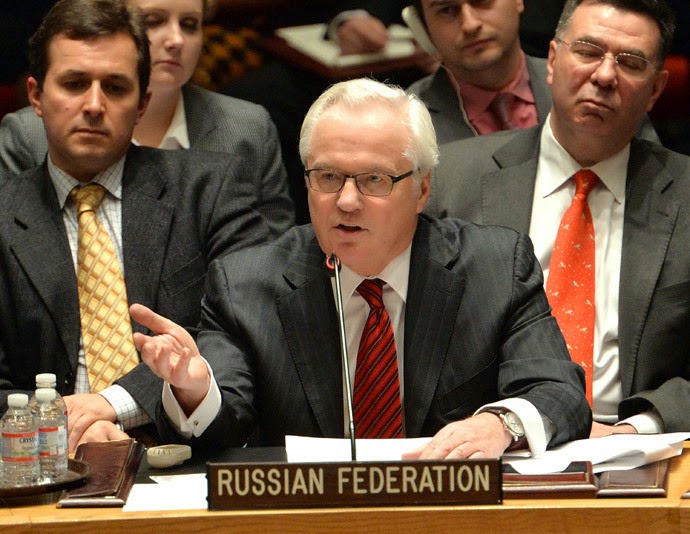 The UN General Assembly has overwhelmingly voted for a resolution submitted by Ukraine denouncing the referendum in Crimea that made the Black Sea peninsula an integral part of the Russian Federation.

One hundred UN member countries voted in favor of the resolution, while 11 voted against and 58 abstained. Only 168 out of 193 UN member states were present at the General Assembly in New York.

The resolution "affirms commitment to the sovereignty, political independence, unity and territorial integrity of Ukraine within its internationally recognized borders."

It also calls on UN member states “to desist and refrain from actions aimed at the partial or total disruption” of Ukraine’s national unity.

The vote has proven that fears of Russia’s international “isolation,” due to the events in Crimea, are groundless, Vitaly Churkin, Russian Ambassador to the United Nations, told RIA Novosti.

Unlike the decisions of the Security Council, the resolutions of the UN General Assembly are not legally binding, but simply express global opinion.

Russia has rejected the UN resolution as “confrontational,” Churkin, said before the vote, adding that the document “undermines the referendum” and the right to self-determination of the Crimean people.

Churkin said that there were “some right things” about the document, however, as it speaks out against unilateral actions and provocative rhetoric. But he said that no UN resolution was needed to achieve those goals, as all sides simply need to start acting in the interests of the Ukrainian people.

The initiative for Crimea to reunite with Russia came from the Crimean people themselves, not from Moscow, Churkin said.

The revocation of the official status of the Russian language and threats to send militants to Crimea by the coup-imposed government in Kiev provided “the critical mass” to push the peninsula to the referendum, he said.

Envoys for the EU and the US declared their support for Ukraine’s territorial integrity.

“The European Union supports the resolution on Ukraine’s territorial integrity, which follows the UN Charter and calls for a peaceful resolution of the conflict,” said Thomas Mayr-Harting, head of the EU delegation to the UN.

In his speech, Mayr-Harting condemned what he called the violation of Ukrainian territorial integrity by Russia and its “annexation” of Crimea, saying that the referendum was “illegal” and “a clear violation of the Ukrainian constitution.”

“Ukraine is justified in asking us not to recognize the new status quo [in Crimea], which Russia has enforced by the military,” she said.

Power urged Moscow to move from a policy of “unilateral confrontation” to diplomacy.

The 193-nation assembly also voted on the Crimea referendum, which the Ukraine resolution says contains “no validity, (and) cannot form the basis for any alteration of the status of the Autonomous Republic of Crimea or of the City of Sevastopol."

The resolution "calls upon all states to desist and refrain from actions aimed at the partial or total disruption of the national unity and territorial integrity of Ukraine, including any attempts to modify Ukraine's borders through the threat or use of force or other unlawful means."

And the resolution invites "all parties to pursue immediately the peaceful resolution" of the crisis "through direct political dialogue."

In an effort to attract votes in the General Assembly, where there appears to be little enthusiasm for allowing the situation to create an irreparable rift with Moscow, the draft made no direct mention of Russia.

"The draft resolution is not aimed at condemning any member state," said Ukraine's UN envoy Yuriy Sergeyev in a letter accompanying the draft.

On March 19, Russia voted down the Ukrainian resolution denouncing the Crimea referendum, while China said it would abstain from the vote.

Russia also vetoed a Security Council resolution that said the Crimean referendum to join Russia would have "no validity" in an emergency session held the day before Crimea headed to the polls.

On March 16, an overwhelming majority of Crimean residents voted in favor of joining the Russian Federation, following violent protests in the capital Kiev, which forced out democratically elected president Viktor Yanukovich

I wonder if the Guardian, now they have acknowledged its existance, will point out that the Right Sector's leader Yarosh is also standing for election 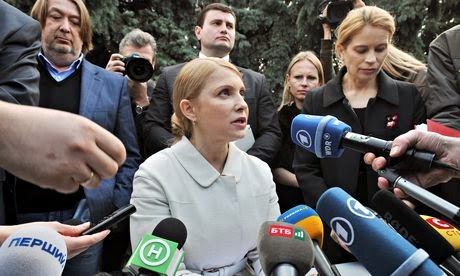 Ukraine's controversial opposition leader, Yulia Tymoshenko, has formally joined the race to become the country's president, on the same day as the huge task facing the new leadership was underscored by a tough IMF aid package that will foist deep austerity on the country.

Tymoshenko – the gas tycoon who led the Orange revolution, then ended up in jail under the previous regime only to be released into the euphoria of the Maidan protests – pledged to represent both halves of the fractured country.

"I will be the candidate of Ukrainian unity," the 53-year-old said. "The west and centre of Ukraine has always voted for me, but I was born in the east, in Dnipropetrovsk."

But it remains unclear how popular Tymoshenko is, and whether she can appeal to both the nationalists in the west and the pro-Russian elements in the east. The latest opinion polls on the presidential race show oligarch Petro Poroshenko, known as the "chocolate king", and former heavyweight boxer Vitali Klitschko in first and second place, respectively – well ahead of Tymoshenko.

Whoever wins the vote on 25 May will face a tough task. The International Monetary Fund on Thursday offered Ukraine a bailout of up to $18bn (£10.9bn) over two years, in return for harsh economic reforms that may well worsen living standards for the already impoverished population. Further IMF aid will be unlocked if austerity measures are passed, including a sharp rise in the cost of energy. In a first vote on Thursday night, parliament approved a law required for the IMF bailout.

In explaining why the the IMF conditions had been accepted, the prime minister, Arseny Yatseniuk, told parliament Ukraine was on the edge of bankruptcy and its economy might shrink by up to 10% this year without austerity measures. With the measures in place, GDP would only contract by 3%, he predicted.

When he started the job last month, Yatseniuk called his government a "kamikaze" administration because of the painful reforms it would undertake. The IMF conditions are sure to further erode political support for Yatseniuk and Tymoshenko, although experts disagree as to how much.

Apart from the rise of up to 50% in the price of gas for consumers, Ukraine's state-controlled natural gas provider announced a 40% gas price increase for local heating companies, starting on 1 July. The government also accepted a flexible exchange rate for its currency, the hryvnia, which has fuelled inflation: an annual inflation rate of 12-14% is predicted.

Sergei Kiselyov, an economics expert from the school of political analysis at the Kiev-Mogilyanskaya Academy, said inflation and higher gas rates for heating companies would "hit a lot harder" than the rise in consumer gas prices, which average only 7.5 hryvnia (38p) per person per month.

The average person pays 200 hryvnia per month to heat a 50 sq metre apartment, but this will now rise to 280 hryvnia. The average monthly wage is 3,148 hryvnia, more than half of which goes towards food.

Combined with the rising prices of imported products, this would cause people's purchasing power and economic position to fall, Kiselyov said.

According to Vasily Koltashov, an economist at the Institute of Globalisation and Social Movements in Moscow, the IMF's austerity measures were harsher than those implemented in Portugal and Greece.

They were "aimed at placing all consequences of the Ukrainian economic crisis on the shoulders of the Ukrainian people," he said. "But Ukrainians differ from the Portuguese and the Greeks because they don't have many savings left. Wages now in Ukraine are, as a rule, not enough to feed a family, and the devaluation of the hryvnia will make it totally impossible."

The worsening economic situation would lead to greater social unrest and could even result in parts of southern and eastern Ukraine following Crimea's example and moving to join Russia, Koltashov said. "People won't fall into depression, they'll resist … and this may take on a pro-Russian tone, not because Russia is good and is calling them to do it, but because people see Crimea joining Russia as a way to jump off a burning train, to get out of the Ukrainian crisis."

Russia is also feeling the economic crunch of the Ukraine crisis and its takeover of Crimea, with wealth leaching from the country at a rate rarely seen before.

The economic development minister, Alexei Ulyukayev, said on Thursday that capital flight amounted to $60bn in the first quarter and would likely reach at least $100bn by the end of the year, up from $62bn last year. As a result, GDP growth would shrink even further to 0.6% and investments would drop to -1.3%, he predicted.

Also on Thursday, S&P changed the outlook on the credit ratings of the Russian state-controlled oil and gas companies Gazprom, Lukoil, Rosneft and Transneft from "stable" to "negative".

The economic slump has yet to affect Vladimir Putin's approval rating, however. The latest poll showed 82.3% of Russians thought he was doing a good job. Putin's rating has risen by more than 20% since the start of the year.

President Obama's key speech in Brussels on Ukraine and attempts to isolate Russia appears to be an exercise of omission, mutually-exclusive statements and unveiled double standards.