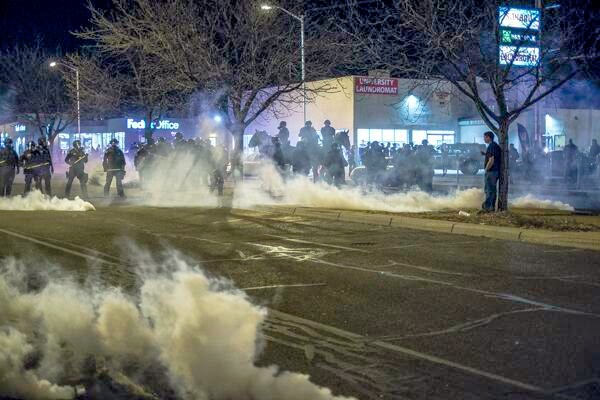 Albuquerque police have violently cracked down on protesters, using tear gas and arresting several demonstrators, after over nine hours of unrest. Hundreds expressed their anger over last week's police shooting that saw a homeless man killed.

At the beginning of the rally, protesters asked police to take responsibility for their actions.

“The police serve us, they do not kill us,” one protester told the local KRQE media outlet.

However, another activist stressed that the rally wasn’t about hating police, rather about standing up for injustice, as he spoke through a microphone to others in the crowd.

Protesters initially gathered around noon on Sunday and marched towards the local police headquarters shouting, “We want justice.”

Several people were dressed up for the rally, with their faces painted and posters in their hands. They were shouting, “Hey hey, ho ho, killer cops have got to go.”

At some point the protest turned violent, as some activists spray-painted property and took down a street sign, and police in riot gear began using tear gas after a stand-off between security forces and demonstrators.

The protesters are outraged over the fatal shooting of a 38-year-old homeless man, who was caught illegally camping in the Sandi foothills.

James Boyd, thought to be schizophrenic, was shot by the Albuquerque security forces just over two weeks ago after he became engaged in an hours-long standoff with officers.

A week after the incident, a video emerged online showing a cop opening fire on Boyd while his back was turned to the police.


Coverage of the original shooting