This looks for all the world like damage control. The West has been out-maneouvred by Putin.

Obama lashes out at Russia over Crimea during Brussels speech

United States President Barack Obama spoke for more than half-an-hour on Wednesday in Brussels, Belgium, and the biggest part of his speech was dedicated to the Russian-Ukrainian conflict over the strategic Crimean peninsula.

The president, who has spent this week touring Europe to discuss the situation in Ukraine with America’s NATO partners, evoked two world wars and other international crises during a 30-minute speech that culminated in a passionate plea for allied nations to, as Mr. Obama said, “meet the challenge to our ideals” being presented by the situation in Crimea.

Pres. Obama stopped short of saying he was ready to up the ante as a standoff between Russia and the West continues with regards to the Crimean peninsula. He did, however, insist that America and its partners were prepared to together widen sanctions against Russia and further attempt to remove it from international discussions if that country continues its involvement in Ukrainian affairs.

“Together we have isolated Russia politically, suspending it from the G8 nations and downgrading our bilateral ties,” Obama said. “Together we are imposing costs through sanctions that have left a mark . . . And if the Russian leadership stays on its current course, together we will ensure that this isolation deepens.”

The president’s remarks came ten days after residents in Crimea — then an autonomous republic in southern Ukraine — overwhelmingly voted to sever ties and align with Russia. Moscow soon after accepted the results of that referendum, but the White House remains adamant that it not be recognized by the West.

Mr. Obama set the stage for Wednesday’s speech before a predominately younger crowd at The Center for Fine Arts in the heart of Brussels by recalling Europe’s vast history where, he said, a now internationally-accepted set of ideals first emerged “through centuries of struggles, through war and enlighten, repression and revolution.”

Those ideals, he added, include “The belief that through conscious and free will each of us has the right to live as we chose,” and “The belief that power is derived from the consent of the governed, and that laws and institutions should be to protect that understanding.”

“Those ideals have often been threatened by an older, more traditional view of power,” Mr. Obama added, before later calling out Russia specifically for its recent annexation of Crimea. 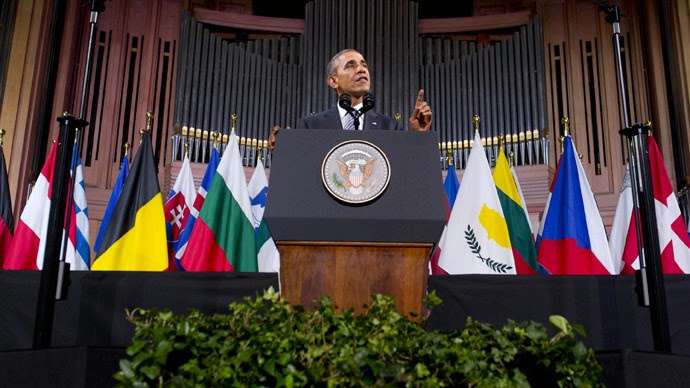 “Once again,” he said later, “we are confronted with the belief among some that bigger nations can bully smaller ones to get their way. That recycled maxim that might, somehow, makes right. So I come here today to insist that we must never take for granted the progress that has been won here in Europe and advanced around the world, because the contest of ideas continues for your generation, and that’s what’s at stake in Ukraine today.”

Speaking of Russia’s handling of Crimea in recent weeks, Obama equated it to redrawing Europe’s border with force despite those hallowed ideals ensuring that “people in nations can make their own decisions about their future.”

The need to condemn Russia internationally, Obama said, is not self-serving.

“To be honest, if we define our interests narrowly, if we applied a cold hearted calculus, we might decide to look the other way,” he said. “Our economy is not deeply integrated with Ukraine’s. Our people and our homeland face no direct threat from the invasion of Crimea. Our own borders are not threatened by Russia’s annexation. But that kind of casual indifference would ignore the lessons that are written in the cemeteries of this continent. It would allow the old way of doing things to regain a foothold in this young century. And that message would be heard not just in Europe, but in Asia and the Americas, in Africa and the Middle East. And the consequences that would arise from complacency are not abstractions.”

At the same time, though, the president did not defer allegations that his own country has acted hypocritically when it comes to Crimea following decades of US-led military operations overseas. The president specifically cited the Iraq War, and acknowledged that it was the subject of vigorous debate both in America and abroad.

“But even in Iraq, America sought to work within the international system,” he said. “We did not claim or annex Iraq’s territory. We did not grab its resources for our own gain. Instead we ended our war, and left Iraq to it people in a fully sovereign Iraqi state that can make decision about its own future.”

“Of course, neither the US nor Europe are perfect in adherence to our ideals, nor do we claim to be the sole arbiter of what is right or wrong in the world—we are humans after all, and we face difficult decisions about how to exercise our power.” The difference, he decried, as that the US “welcome[s] the responsibilities that come with global leadership.”

“These Ukrainians rejected a government that was stealing from the people instead of serving them, and are reaching for the same ideals that allow us to be here today,” he added. “None of us know for certain what the coming days will bring in Ukraine, but I am confident that eventually those voices — those voices for human dignity and for opportunity and individual rights and rule of law — those voices ultimately will triumph.”

The International Monetary Fund is currently discussing plans that will reportedly allow Ukraine to receive a substantial bail out of roughly $15 billion amidst a dire financial situation there only worsened by the recent turmoil and last month’s ousting of then president Viktor Yanukovych. On Wednesday, though, Obama said that the interim Ukrainian government will continue to receive not just financial aid, but the backing in spirit of the US and its allies.

“Sanctions will expand and the toll on Russia’s economy as well as its standing in the world will only increase,” Obama said, if the Crimea crisis worsens. “And meanwhile the US and our allies will continue to support the government of Ukraine as they chart a democratic course.”

“[W]e live in a world in which our ideals are going to be challenged again and again by forces that would drag us back into conflict or corruption. We can’t count on others arise to meet those tests: the policies of your government, the principles of your European Union, will make a critical difference in whether or not the international order that so many generations before you have strived to create continues to move forward or whether it retreats,” he said.

“That’s the question we all must answer: What kind of Europe, what kind of America, what kind of world will we leave behind? And I believe that if we all hold firm to our principles and are willing to back our beliefs with courage and resolve, then hope will ultimately overcome fear, and freedom will continue to triumph over tyranny. Because that is what forever stirs in the human heart,” he concluded his address

Troops loyal to Kiev may be packing up and leaving Crimea - but north of the new border, young recruits from the peninsula are facing uncertainty. Their families hear scant news from them and now fear Ukraine won't let them return home. RT's Paula Slier reports on the arduous wait.

The illegal western backed coup in Kiev continues to shape and re-shape Russia's relations with the West. Will the West continue to support the hunta in Kiev? And should Russia care of its dismissal from G8? CrossTalking with Johan Bäckman, Andy Martin and William Blum.